{{ activeItem() }}
Twitter
09/29/20
Plug and play. The Audi A3 Sportback TFSI e. #AudiA3 #Hybrid https://t.co/m2M37q8IgP
09/29/20
Another step forward in our #electrification strategy: the new #Audi #A3 Sportback 40 TFSI e. This model is our fir… https://t.co/iABYnfzjzk
09/29/20
RT @VWGroup: “'Vorsprung durch Technik' – that’s the destination we’re (re-)setting course for at @AudiOfficial! And the e-tron is one more…
09/28/20
Our innovative research project on bidirectional charging with the Hager Group incorporates electric cars into peop… https://t.co/eONYRc0FgG
Audi on Twitter
YouTube
10/01/20 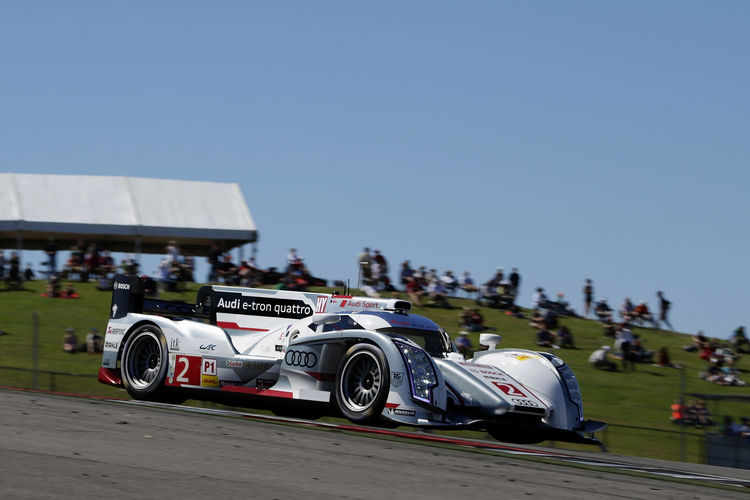 Audi is still undefeated in the 2013 sports car season. All five rounds of the FIA World Endurance Championship (WEC) went to Audi Sport Team Joest. On the Fuji circuit in Japan, Audi may achieve the early defense of the World Champion’s title in the manufacturers’ classification on October 20.
Download PDF (185 KB)
Facebook
Twitter
LinkedIn
WhatsApp

Audi is still undefeated in the 2013 sports car season. All five rounds of the FIA World Endurance Championship (WEC) went to Audi Sport Team Joest. In addition, the Audi R18 e-tron quattro won the Sebring 12 Hours. Most recently, at Austin, Head of Audi Motorsport Dr. Wolfgang Ullrich’s squad celebrated the 100th overall victory of an LMP race car from Ingolstadt and Neckarsulm. Now the next sporting milestone is just around the corner. On the Fuji circuit in Japan, Audi may achieve the early defense of the World Champion’s title in the manufacturers’ classification on October 20.

It was love at first sight. Although Japan is located about 9,000 kilometers from Germany the style in which Audi Sport was received at Fuji on the WEC’s first visit a year ago was overwhelming. An enthusiastic Japanese crowd welcomed the Audi race drivers and Audi Sport Team Joest as if they were at home in Japan, asked for autographs throughout the weekend, and vociferously cheered them on. In the main grandstand, a group of fans offered an acoustic spectacle the rhythm and volume of which was more reminiscent of a samba parade than a motorsport event. 50,000 fans attended the race at the time.

Several Audi factory drivers who either spent many years of their careers in Japan or are still at home there contributed to the huge popularity of the Audi team. Tom Kristensen (DK) drove in Japan for four years, his team-mate Loïc Duval (F) has been active in the land of the rising sun since 2006 and lives in Tokyo. Together with Allan McNish (GB), who frequently traveled to Japan in the past as a test driver, they are leading the WEC drivers’ standings with a 33-point advantage following their third victory of the season at Austin.

Their own team-mates are their closest rivals. André Lotterer (D) has been involved in Japanese racing series since 2003 and lives in Tokyo, his partner Benoît Tréluyer (F) spent twelve years of his racing career in the Pacific island state. Only Marcel Fässler (CH) had no connection to Japan before the WEC round at Fuji a year ago. But this did not keep the passionate fans from welcoming him on banners as warmly as his team-mates.

Aside from the joy before the event, there are some hard facts indicating that Japan will be an important race. Audi may win this year’s first World Championship title right at the sixth WEC round. Audi’s advantage over Toyota amounts to 69 points, with a total of 52 points yet to be awarded at the two rounds following Fuji. Thus, finishing the race is the prerequisite for securing the title early. But there is much more at stake. After Audi was defeated at Fuji last year, the R18 e-tron quattro is to cross the finish line as the winner in 2013. In the competition, Audi will be meeting with two race cars from challenger Toyota.

In terms of business, the Asia-Pacific region is important for the brand with the four rings as well. In the first nine months of the year, Audi increased its sales in this region by 20.2 percent. Japan, with deliveries up by 16.9 percent to 21,400 showed one of the strongest growth rates among the ten largest sales markets of AUDI AG.

Fans can watch the event on the track in the foothills of Mount Fuji on the internet. Audi is broadcasting the action by live streaming on www.audi-motorsport.com. Additional background information is made available on the Audi Sport App, Twitter and Facebook.

-Can Audi defeat Toyota at their home round at Fuji for the first time?
-Will the number of spectators increase on the WEC’s second visit to Japan?
-Will Loïc Duval/Tom Kristensen/Allan McNish manage the next step in the title battle or will Marcel Fässler/André Lotterer/Benoît Tréluyer come closer again?
-Will Audi defend the manufacturers’ World Championship title?

Dr. Wolfgang Ullrich (Head of Audi Motorsport): “Fuji won’t be an easy task for us because, for one, challenger Toyota will be fielding two cars in the race, and, for the other, we saw last year that the track doesn’t suit us so well. But we’re going to leave no stone unturned to continue our string of success. I’m already looking forward to a particularly popular 6-hour race and the enthusiastic crowd.”

Chris Reinke (Head of LMP): “We’ve experienced an outstanding season so far. Now we’re aiming to settle some unfinished business from last year’s round at Fuji. We realize that, by fielding two cars, Toyota will have the corresponding strength. We’re going to do everything within our means to continue our string of victories in Japan.”

Ralf Jüttner (Technical Director Audi Sport Team Joest): “A year ago, we were welcomed with open arms by an enthusiastic crowd. The fans in the main grandstand practically chanted when our squad performed its pit stops. Returning there is fun. The team thoroughly prepared the two race cars for the next run before leaving Austin. After five WEC victories in succession, we’re traveling to Fuji full of energy.”

Marcel Fässler (37/CH), Audi R18 e-tron quattro #1 (Audi Sport Team Joest)
-Is driving in Japan only for the second time in his career
“I was in Japan for the first time a year ago and was deeply impressed with the country and its people. I really like the track at Fuji as well. And the Japanese fans arrived in large numbers. It was a valuable addition to the WEC, so I’m looking forward to this race with eager anticipation. The track with its predominantly semi-fast and very fast sections is a nice challenge.”

André Lotterer (31/D), Audi R18 e-tron quattro #1 (Audi Sport Team Joest)
-Has mainly been living in Tokyo since 2005
“I’m very much looking forward to the WEC race in Japan. This year, I was on the Super Formula grid at Fuji and celebrated a victory there in July. I’m sure that our Audi R18 e-tron quattro will be better this season than it was last year. We want to make life difficult for Toyota and battle for victory. Another nice aspect is the continuous enthusiasm of the Japanese fans.”

Benoît Tréluyer (36/F), Audi R18 e-tron quattro #1 (Audi Sport Team Joest)
-Posted the first fastest race lap in the WEC at Austin
-Has spent twelve years of his career in Japan
“I can hardly wait to travel to Japan. I’ll arrive a little earlier in order to meet a lot of friends, fans and team members from the past. I associate a lot of success with the track at Fuji. Due to a small tussle we gave away the chance of battling for victory last year. We want to make up for that now. Our aim is the top step of the podium.”

Loïc Duval (31/F), Audi R18 e-tron quattro #2 (Audi Sport Team Joest)
-Together with Allan McNish, last posted the fastest time in qualifying at Austin
-Is driving a race for Audi in Japan for the first time
“Following Le Mans, this is my second home race because I live in Japan. Last year, I was at Fuji as a guest of Audi and this year I’m driving the WEC race in Japan for the first time. The sports car race was a big event a year ago and now we’re arriving at round six of the season as the leaders of the standings. I’m hoping for our team to benefit from my experience at Fuji.”

Tom Kristensen (46/DK), Audi R18 e-tron quattro #2 (Audi Sport Team Joest)
-Leads the WEC standings together with his team-mates
-Drove in Japan in his career between 1992 and 1995
“Following Audi’s 100th LMP overall victory, we’ve set our sights on the next aim when we’re traveling to Japan. We’re competing in a nation that’s absolutely enthusiastic about motorsport and want to win the manufacturers’ World Championship there. We’ll be meeting with two cars from our challenger Toyota, which will make the race particularly interesting and exciting.”

Allan McNish (43/GB), Audi R18 e-tron quattro #2 (Audi Sport Team Joest)
-Most recently, celebrated the third win of the season with his team-mates at Austin
“I always enjoy traveling to Japan. When I left Europe for the first time at the age of 20, Japan was the first Asian country I got to know. I repeatedly spent time there for Formula 1 tests and individual races. The Fuji 6 Hours was a great race a year ago. The track is demanding. I like the first part better than the last one. Some sections suit Audi but the rear part of the track should be more favorable for Toyota. We’re expecting a thrilling battle. And the fans are a really important part of this race.”

The Audi drivers at Fuji

André Lotterer about the track at Fuji

“At the end of the long straight, there’s a right-hand turn with good overtaking opportunities, followed by a left-hander. We downshift and accelerate early because the corner opens up. The most thrilling section is 100 R that winds in a 180-degree bend and cannot be driven completely flat-out. Its apex is almost at the end. In the subsequent hairpin turn, you gain a lot of time if you can accelerate early. The next straight is interrupted by two slight right-hand bends that are taken at full throttle on a dry track. The chicane is followed by a final combination of corners. The turn-in phases are very long due to the unusual radii. The last right-hand turn lends itself well to overtaking. The hybrid drive of the Audi R18 e-tron quattro can be intensely felt in the A-Corner, the 100 R and the hairpin.”