{{ activeItem() }}
Twitter
09/19/20
Innovator tested, visionary approved. The Audi Q4 Sportback e-tron concept. #Audi #AudiQ4 #etron #Sportback… https://t.co/fI3WfYN2PA
09/18/20
“It is our task to leverage our technical and engineering competence to provide answers which are enabling society… https://t.co/usLMaXlxa7
09/18/20
Watch the latest episode of #WhatsUpAudi to find out more about the new Q2 #generation and its striking #design &gt;&gt;… https://t.co/DUKsAYe75t
09/18/20
Sophisticated #technology meets #sustainability in the #Audi #A3 Sportback 30 #gtron. Running on #natural #gas or… https://t.co/816xxFPaXA
Audi on Twitter
YouTube
09/18/20 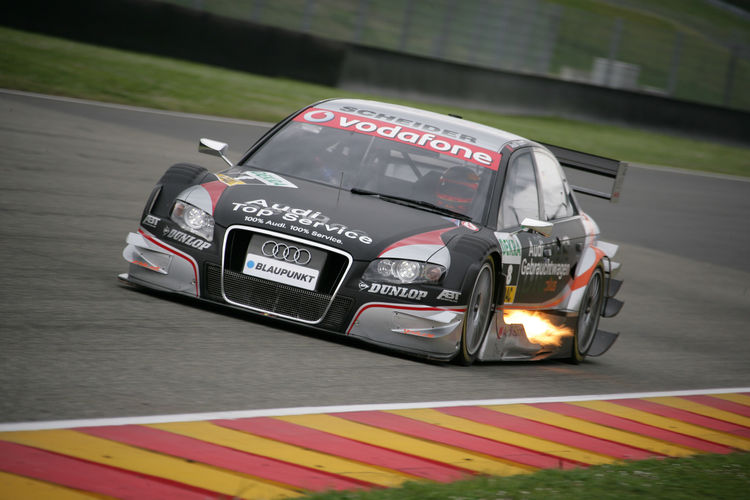 An “away race” is on the agenda for Audi Sport after its “home race” at the Norisring: The second-half of the DTM season starts at Mugello (Italy) on the weekend of 15 July. The target is clear for the Audi squad: They aim to reclaim the championship lead that they narrowly lost at the Norisring.

The foundations look good for this: Circuits with fast and flowing corners have always suited the Audi A4 DTM. The longest DTM circuit of the year at 5.245 kilometres does not only have many, but also extremely demanding corners on offer, in which both the Audi A4 DTM and the Audi drivers felt particularly comfortable during the pre-season tests.

The team under Head of Audi Motorsport Dr Wolfgang Ullrich also has fond memories of the last DTM Italian job: In 2004, Mattias Ekström scored the first victory of the then brand new first generation Audi A4 DTM.

The Swede, who celebrates his 29th birthday on Saturday at Mugello, travels to Italy in second place in the standings. Only 1.5 points separate him from championship leader Bernd Schneider. Lurking another four points behind is Martin Tomczyk, who not only aims to put his team mate to the test during the DTM race: On Friday evening, the German goes head-to-head against Mattias Ekström’s Audi A4 DTM in a drag-race with a self-made radio-controlled model car along the start-finish straight.

One of the two Audi A4 DTM Race Taxis is in particularly gifted hands on the second weekend in July: Four-time Motorbike World Champion Max Biaggi sits at the wheel. The 36-year old Italian knows the Mugello track more intimately than the majority of the DTM drivers, since the circuit close to Florence has been the venue of the Italian Motorbike Grand Prix for many years.

The race at Mugello starts unusually late: The grid will only be unleashed on Sunday at 5:40 p.m. so as not to clash with TV coverage of the “Tour de France”. Saturday’s qualifying starts, as usual, at 1:28 p.m. ARD TV broadcasts qualifying and the race live on “Das Erste”.

Quotes before the race at Mugello

Dr Wolfgang Ullrich (Head of Audi Motorsport): “It’s difficult not to like Italy and Tuscany, which is why we are all eagerly looking forward to the race at Mugello. We know the circuit from our days spent racing in the Italian Super Touring Car Championship and from tests at the beginning of this year. The circuit should suit us. We are well sorted for Mugello and will look to improve our position in the championship.”

Mattias Ekström (Red Bull Audi A4 DTM #3): “I’m already looking forward to Mugello. We went testing there in April and have plenty of useful information. What’s more, our A4 is finally a little lighter again. We’ll try everything at Mugello to clinch another victory for Audi.”

Martin Tomczyk (Red Bull Audi A4 DTM #4): “Since we tested there, Mugello has become a hot candidate to become my new favourite track. It really is great fun to drive there and to set-up the car. Also, the landscape is absolutely beautiful, which leaves only one thing to say: Bella Italia! I think I have a good chance at Mugello to move up the championship leader board again.”

Tom Kristensen (Siemens Audi A4 DTM #7): “After my comeback at the Norisring turned out to be somewhat strenuous, I’ve had the opportunity to work more on my fitness which had suffered a little during my nine-week layoff. I’ll be fitter than I was at the Norisring. Mugello is a fabulous track in a beautiful area. Mugello, and also Zandvoort a fortnight later, are two circuits I’m really looking forward to!”

Timo Scheider (Gebrauchtwagen:plus/Top Service Audi A4 DTM #8): “It should be a help that we tested at Mugello – and certainly the weight situation. I’m really looking forward to Mugello, especially as it is in Italy and also as I’m connected to Italy through my fiancée and grandfather. To take victory there would be very special – particularly as the last two races were a bit of a flop for me.”

Mike Rockenfeller (S line Audi A4 DTM #11): “I can hardly wait to get to Mugello! We had the opportunity to test there during the winter. It’s a very fast, flowing circuit – a real driver’s circuit! I think that we’ll start with a good set-up there, and hope that Team Rosberg and I will once again be rewarded with a good result.”

Lucas Luhr (Philips Audi A4 DTM #12): “Mugello is a beautiful circuit. I think that our A4 suits the circuit a little better than the previous tracks. I hope that things will run a little more smoothly for the guys in the team and I than they have done more recently, and that we fulfil our promise.”

Christian Abt (Playboy Audi A4 DTM #16): “Mugello is new terrain for the majority of us. We’ve actually tested there already, but apart from Bernd Schneider, nobody else has raced at the track. I think that our A4 will suit Mugello, which is why I’m looking forward to the race.”

Alexandre Prémat (Audi Bank Audi A4 DTM #17): “I’m already looking forward to Mugello. We had a good test there. Also, our car is nicely light now, which should play to our advantage around this circuit. I’m a big fan of fast tracks, which is why I’m hoping for a good result. After having claimed two consecutive point scoring finishes I’d really like to score as many points as possible in Italy.”

Markus Winkelhock (Audi A4 DTM #20): “When I replaced Tom Kristensen for two races, I enjoyed racing in DTM again. That it has become possible to come back makes me very happy. I’m not sitting in a 2007-spec car any longer, but the 2005-spec car has a weight advantage. I’ll do my best.”

Vanina Ickx (Audi A4 DTM #21): “As a circuit, Mugello is certainly one of the biggest challenges of the entire DTM season. It is quick, and runs uphill and down dale almost like Spa-Francorchamps. It’ll be a fantastic show for the fans!”

Hans-Jürgen Abt (Team Director Audi Sport Team Abt Sportsline): “During the first-half of the season we’ve created an excellent platform from which we can attack the second-half. We race with a little less weight in Mugello, and, bearing in mind just how close the times are, this plays a very important role in the DTM. Circuits with fast and flowing corners have always suited us. The team is incredibly well motivated because we have two drivers in the thick of the title battle.”

Ernst Moser (Team Director Audi Sport Team Phoenix): “We are looking forward to the paste, the picturesque region and hopefully the Italian. Our goal is to finish in the points with both cars at Mugello.”

Arno Zensen (Team Director Audi Sport Team Rosberg): “Things looked good for us during the test at Mugello. I’m looking forward to Tuscany and hope that we can emulate previous successes there.”

The schedule at Mugello

Point standing after 5 of 10 rounds