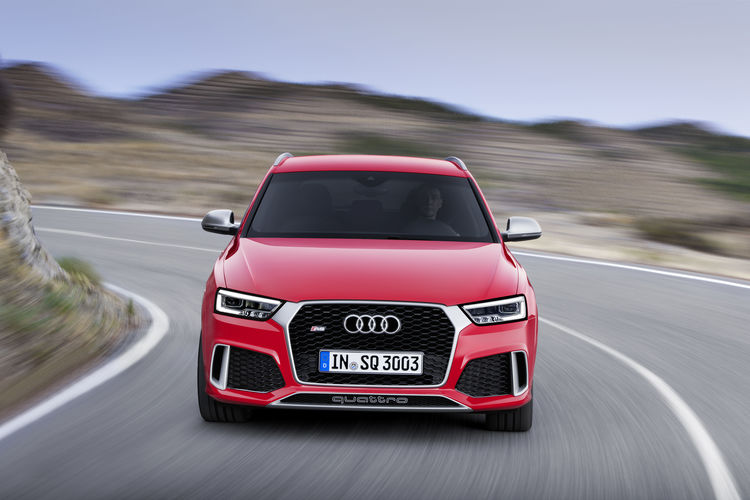 In 2014, AUDI AG clearly exceeded its goal of 1.7 million deliveries: By year-end, the company handed over around 1,741,100 cars to customers, 10.5 percent more than in 2013. The company was thus once again able to accelerate its growth pace and achieved with around 165,600 additional customers the second-highest volume increase in its history. The coveted SUV models* (+15.8%) and the A3 family* available worldwide for the first time in 2014 (+53.2%) contributed primarily to the strong sales total. In December, Audi continued to post double-digit growth and concluded the year with sales up 14.7 percent to around 150,000 units for the month.

“2014 is impressive evidence of the Audi brand’s strength,” says Rupert Stadler, Chairman of the Board of Management of AUDI AG. “We accomplished a very successful record year even before the second stage of our model initiative. Meanwhile, conditions in many markets continue to be challenging.”

Sales chief Luca de Meo emphasizes the ongoing globalization of AUDI AG’s business as an important success factor: “Last year, we advanced in all regions around the world and gained market share. We increased our lead in the Chinese premium segment and concluded the year in Europe significantly above the pre‑crisis level of 2007. On the U.S. market, Audi is growing at almost three times the rate of total automotive sales.” Overall, Audi achieved new all‑time highs in 50 countries in 2014. Globally, the company’s deliveries increased by more than 100,000 units for the fifth year in a row. Compared to sales of 949,729 units in 2009, almost 800,000 more customers chose the brand with the four rings last year.

In the United States, deliveries more than doubled in the same period of time, from 82,716 automobiles in 2009 to 182,011. In 2014, the brand with the four rings achieved an increase of 15.2 percent in the United States. With 19,238 deliveries, December was the strongest sales month ever for Audi of America, and the 48th record in a row – as in 2011, 2012 and 2013, Audi again succeeded in beating the respective prior‑year volume each month in 2014. The Q5* played a significant role in this, rising to become the best‑selling Audi model in the United States for the first time with 42,420 units (+5.1%). The full‑size SUV Q7* also made significant progress in its ninth year of sales, increasing 15.9 percent. In the compact segment, the Q3* extended Audi’s SUV portfolio on the U.S. market in fall; moreover, the A3 Sedan* celebrated its successful premiere at American dealerships in spring. Canada (+19.5%) and Mexico (+10.5%) also contributed to Audi’s successful year in North America with double‑digit growth. Despite difficult market conditions in several countries, sales in South America also increased considerably for AUDI AG, above all in Brazil (+89.9% to 12,350 cars). Demand in that country grew faster than expected, resulting in dealerships running low on cars at the end of the year.

In Europe, Audi sales climbed 4.2 percent in 2014 to 762,900 cars – a new record for the highest selling premium brand in the region. Whereas in Western Europe alone the total market continued to lag behind its pre‑crisis level of 2007 by around one fifth, Audi sales in 2014 exceeded those of 2007 by around eight percent. Audi UK in particular recorded a strong boost in sales last year, reaching the 150,000 mark for the first time with a plus of 11.8 percent to 158,829 customers in the United Kingdom. Audi also saw considerable growth in Spain (+9.4% to 38,277 cars); in Germany (+2.2% to 255,582 cars) and Italy (+4.3% to 49,022 cars), the company also sold more cars than one year ago. In the ongoing unstable economic environment in France, Audi reached the previous year’s level (+0.4% to 57,214 cars). The brand with the four rings closed out 2014 in each of the five largest Western European automotive markets as the highest selling premium brand in the passenger car segment. In Russia however, sales didn’t maintain the levels of the previous year. Due to the challenging conditions in the market, 34,014 deliveries for Audi remained 5.9 percent below the 2013 record, while still developing more stable than the market as a whole. Across all European markets, the A3 family (+19.0%) was among the key drivers of Audi’s positive performance in 2014. Launched in the fall of 2013, the all‑new A3 Sedan exceeded expectations in Europe, too. In addition, the particularly efficient ultra models provided a strong impetus. Introduced gradually onto the markets over the past months, the ultra portfolio already accounted for nearly 10 percent of Audi sales in Europe in 2014. For the A6*, the share of ultra models in Europe was even around one third.

Among the major Asian markets, South Korea reported the highest growth for Audi in the year just ended, up 38.0 percent to 27,647 customers. Thanks to strong demand in particular for the brand’s full‑size models, Audi’s sales figures have increased more than four fold in the market over the past five years. Despite their slowed market dynamics, Japan (+9.1% to 31,356 cars) and India (+8.5% to 10,851 cars) also performed positively for Audi in 2014. Audi continued its growth in China as well, increasing sales by 17.7 percent to 578,932 cars in 2014. AUDI AG thus became the first premium carmaker to sell over a half a million units in China within a single year. In December alone, Audi handed over 62,576 automobiles to Chinese customers and registered the highest monthly sales total in its history. In addition to further increasing sales in the full‑size category, Audi’s growth in 2014 was also fueled by the locally produced A3 Sedan available since fall and the entire SUV family. Compared to one year ago, Chinese dealerships delivered twice as many of the Q3 compact SUV alone (+103%).

Also worldwide, all of the brand’s SUVs posted increasing sales figures and together achieved a 15.8 percent growth to 507,500 cars. Almost one in three Audi customers chose an SUV in 2014 – this translates into more than doubled SUV sales compared to 2011. With the Q3 and Q5, both bestsellers of the Q family are the most successful premium models in their respective competitive segments. In the full‑size category, Audi will present the new Q7* at the North American International Auto Show in Detroit beginning next week.