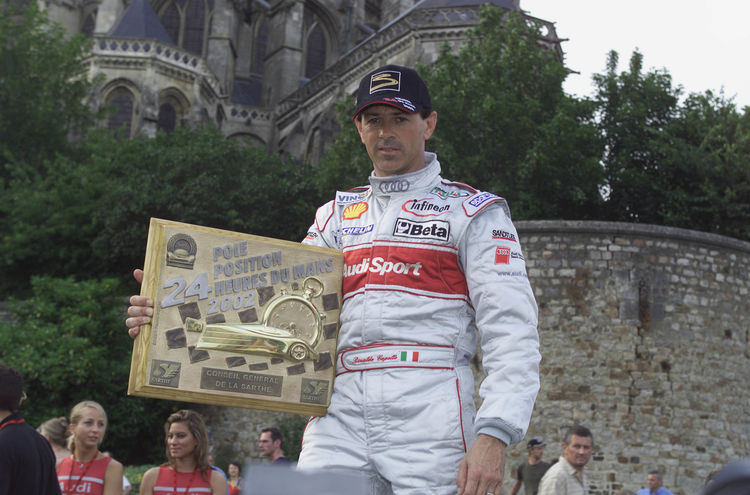 For the 70th running of the Le Mans 24 Hour race, Audi has achieved the best possible starting position. During the second qualifying session on Thursday evening, Audi secured the first three positions on the grid for the famous French endurance race. Rinaldo Capello (Infineon Audi R8 #2) improved his time from the previous day with a new record lap as well as team-mates Tom Kristensen (#1) and Michael Krumm (#3).

Rinaldo Capello is the first driver since 1980 who starts from pole position at Le Mans for two consecutive years. For the third time in a row, it is the yellow R8 which leads the field into the highlight of the season in France. The three silver Infineon Audi R8 sportscars which fly the additional colours of black (Krumm/Peter/Werner), red (Biela/Kristensen/Pirro) and yellow (Capello/Herbert/Pescatori) resembling the German flag, finished the qualifying within a margin of less than a second.

In the final session, Capello became the first driver in a Le Mans prototype (LMP) to shatter the 3m 30s barrier. With his time of 3m 29.905s, the Audi driver even broke the track record of Martin Brundle who had set his time in 1999 on a different shaped circuit. Since then, some corners near the famous “Dunlop Bridge” had been added.

For the third time in a row, Audi Sport Team Joest starts from pole position at Le Mans and now has the chance to achieve a very rare hat-trick after the victories of 2000 and 2001: In the 70-year-old history of Le Mans only four manufacturers have managed to win the race in three consecutive years with the same team to take home the historic trophy.

Rinaldo Capello (Infineon Audi R8 #2): “For the third successive year ‘my’ car will start Le Mans from pole-position. I am really hoping that it will be third time lucky for me to earn a first victory here. I had to overtake a number of slower cars on my pole lap but that is normal at Le Mans. So far, so good.“

Johnny Herbert (Infineon Audi R8 #2): “We spent the final part tonight fine-tuning the car ready for the race - making it as comfortable and as easy to drive as possible which is vital. Dindo produced a stunning pole time but now we must repeat this performance throughout the 24 hour race to achieve a memorable victory.“

Christian Pescatori (Infineon Audi R8 #2): “I am very happy that Dindo did such a good time and we will again start from pole position this year. I drove with a big amount of fuel and the race setup today. I had a good feeling in the car and the tyres were very consistent. That makes me confident for the race. Dindo, Johnny and I have won Sebring – now we are ready for Le Mans.”

Frank Biela (Infineon Audi R8 #1): “The changes we did compared to yesterday seemed to work, we did a very good job. Even on old tyres and on full tanks the car felt good. The three Audis are close together after qualifying. Luck or bad luck will be decisive. After 15 or 20 hours we can say more…”

Tom Kristensen (Infineon Audi R8 #1): “It is business as usual at Le Mans as I wasn’t good enough to find a clear lap on my qualifying run. We now line up second and considering the way things have turned out for the past two years, I’m very happy. The car is fantastic.”

Emanuele Pirro (Infineon Audi R8 #1): “I was happy with the car today especially in the second half of the session. Qualifying is not important to me. We started second also in the last two years and won the race. We have 24 hours to overtake the car in front of us…“

Michael Krumm (Infineon Audi R8 #3): “For us, the second row is a perfect starting position. There is no other competitor between us and the other Audis so we can easily watch the pace of our team mates at the front. We’ll surely profit from the experience of the other Audi drivers and will just try to follow them the best we can.”

Philipp Peter (Infineon Audi R8 #3): “I think we are perfectly prepared for the race and can confidently await the start on Saturday. Our goal for the race is quite clear: We want to drive 24 hours without any mistakes, stay on the lead lap as long as possible and then cast an eye on a podium position.”

Marco Werner (Infineon Audi R8 #3): “I’m very satisfied with my times. The car feels even better than yesterday. I’m well prepared for Saturday, because most of the time today I’ve been driving with the race set-up and with a lot of fuel. For me, that was more important than good times which Michael did anyway with the second row on the grid.”

Seiji Ara (Audi R8 #5): “The mechanics did a fantastic job to get the car repaired – all of the wiring loom was replaced during the interval. The Audi R8 felt good.”

Yannick Dalmas (Audi R8 #5): “Our mechanics worked until 5am this morning repairing the car after my accident on Wednesday night. So it was especially disappointing to be side-lined with an electrical problem early tonight. But we still have a car capable of a top finish.”

Hiroki Katoh (Audi R8 #5): “Because of the electrical problem the team decided that Seiji should complete the second half of the session to gain experience of the Le Mans circuit. Qualifying has been a disappointment but we start the race knowing that we drive a proven Le Mans race-winning car.”

Reinhold Joest (Team Director Audi Sport Team Joest): “The session today proved once again: We are ready for the race. We have worked hard during the last months, and I am proud that our drivers achieved the best starting positions on the grid. The drivers of our car number three, who don’t have that much experience here, really surprised me in a positive way.“

Dr Wolfgang Ullrich (Head of Audi Sport): “This is a perfect position to start. All three cars are in front and are close together. The drivers of our new team proved during practice that our confidence for them was justified. They steadily narrowed the gap and proved in the end, that they can add further strength to the other two teams. Now we need the necessary luck for the race and the right decisions during long 24 hours.”

The starting grid at Le Mans