Audi achieves hat-trick in the DTM 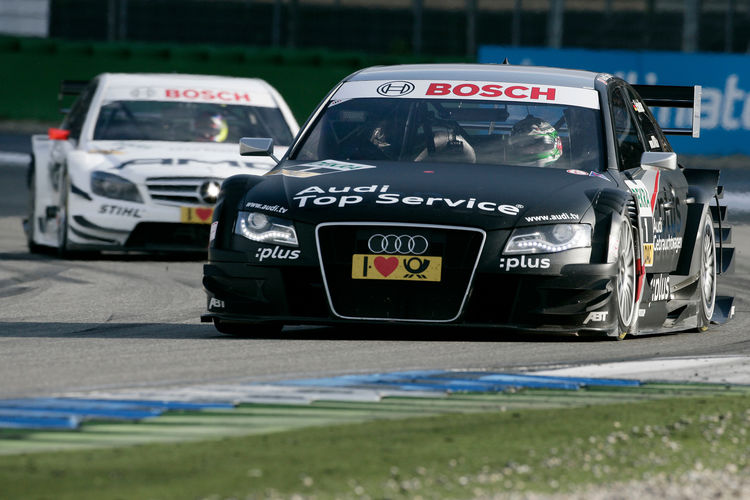 Befitting its 100th anniversary, Audi has written another chapter of motorsport history. The brand is the first ever automobile manufacturer to achieve a title hat-trick in the prestigious international touring car racing series: After 2007 and 2008, Audi has clinched the coveted trophy for the third consecutive time.

In the thrilling finale at the Hockenheimring in front of a magnificent turnout of 155,000 spectators Audi driver Timo Scheider stayed on the heels of his only remaining rival for the title, Gary Paffett, during the entire 39 laps and successfully defended his title from last year by finishing in second place.

“Every Audi employee can be proud of the performance which the DTM squad delivered this year – or better said, has been delivering for three consecutive years,” commented Rupert Stadler, Chairman of the Executive Board of AUDI AG. “In the DTM we compete with one of the toughest rivals you can imagine. On behalf of the entire executive board I would like to extend sincere congratulations to everyone who had a part in this feat. Audi Sport could not have given the Audi brand a nicer gift on its 100th anniversary.”

For Audi, after 1990 (Hans-Joachim Stuck), 1991 (Frank Biela), 2002 (Laurent Aiello), 2004 (Mattias Ekström), 2007 (Mattias Ekström) and 2008 (Timo Scheider), this marks as much as the seventh DTM title and the fourth since the brand returned to the series with a manufacturer’s commitment in 2004. “No automobile manufacturer has ever consecutively won three titles in the DTM,” said Head of Audi Motorsport Dr. Wolfgang Ullrich. “Audi has managed to do it – despite a very strong opponent. After two hat-tricks at Le Mans, now we’ve also achieved a hat-trick in the DTM. This third title no doubt was the most difficult one. But I’m sure that next year it’ll be even more difficult. ‘Thank you’ to everyone who made this great exploit possible for Audi. And congratulations to Timo (Scheider) – like last year, he won the title again on his own power.”

After his triumph, the old and new DTM Champion was speechless at first. “Now I’ve been able to experience this dream, for which we all worked so long and hard, for the second time in a row – and thanks to the Audi squad, the Abt team and my family,” said the 30-year-old obviously moved and with tears in his eyes. “Gary Paffett was a strong rival and won four races. But for as long as I’ve been contesting the DTM the driver with the highest points score has always been the one to become champion ...”

Scheider won twice in the 2009 season and mounted the podium at six of the ten races. He was the most consistent driver and in the end had an advantage of five points over Mercedes driver Gary Paffett. Audi’s track record is impressive as well: The brand with the four rings won four races, started from the pole position eight times, posted six fastest race laps, scored ten more points than its competitor, led 325 of 548 laps and clinched 17 of 30 possible podium places. On four occasions, Audi even claimed the entire podium.

In the finale at Hockenheim the first two laps in particular were a real thriller when Mattias Ekström, who had started from the pole position and Gary Paffett fought an extremely tough duel and touched each other several times. The radiator of Ekström’s Audi A4 DTM was damaged in the process. After four laps the Swede, who was leading the race at that time, was forced to retire and thus lost third place in the standings to Paul Di Resta.

After a start at lightning speed, Timo Scheider watched the duel between Paffett and Ekström from a choice position and only drove his conservatively set up A4 as fast as necessary to stay close to Paffett and keep Paul Di Resta in third place at bay. Scheider managed doing this again when, shortly before race end, the safety car was deployed and unexpectedly pushed the field together once more. When the race was re-started Scheider got everything right as well and crossed the finish line after 39 laps just 1.043 seconds behind Gary Paffett in second place.

By finishing fourth, Alexandre Prémat achieved his best result of the season in a strong race and was also the best driver of a year-old car. With Oliver Jarvis and Markus Winkelhock on places six and eight, two other Audi drivers, who had been fighting a captivating duel throughout the race, finished in the points. Mike Rockenfeller in ninth position just barely missed scoring a point.

In his 60th and last DTM race Tom Kristensen was struck by misfortune not just once but twice: The Dane was hit in the rear right on the first lap in the hairpin and dropped to the back of the field. After a remarkable recovery Kristensen was turned around once more after a safety car period. Martin Tomczyk, as well, became the victim of a collision on the starting lap, which forced him to retire. As a result, Timo Scheider was the only driver of an 2009-spec Audi A4 DTM to score a points finish at Hockenheim.

With the title win in the DTM, another successful motorsport season has come to an end for Audi, which will also enter the annals of partner ABT Sportsline’s company history: After the triumph in the Formula ADAC Masters by Daniel Abt and in the ADAC GT Masters by Christian Abt with the new Audi R8 LMS, the squad from the Allgäu managed a hat-trick as well.