Another historic success for Audi 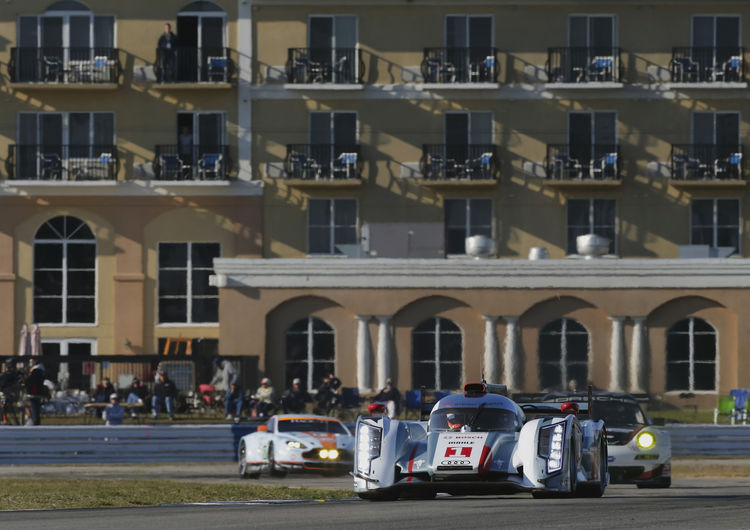 Another historic racing success for Audi: The Audi R18 e-tron quattro’s victory marked the first ever of a hybrid race car at the Sebring (Florida) 12 Hours in the history of the U.S. endurance classic.

On the – provisionally – last running of the LMP1 sports cars that feature sophisticated technology at Sebring, Audi Sport Team Joest achieved a commanding one-two victory. Right from the start, the two Audi R18 e-tron quattro cars set the pace, during the entire race an Audi was at the front of the field made up of 42 prototypes and GT sports cars. The third-placed Lola-Toyota was trailing the winner by five laps at the finish.

For twelve hours, the two Audi R18 e-tron quattro cars fought a fierce duel for victory and repeatedly overtook each other in close battle. In total, the lead between the two R18 cars changed 20 times. A damaged under-floor of car number “1” that was ultimately victorious caused some headaches for Audi Sport Team Joest. The necessary repairs could be performed without any major time loss during caution periods though.

In the thrilling duel between the team’s two cars the current Le Mans winners and World Endurance Champions Marcel Fässler (CH) and Benoît Tréluyer (F) plus Sebring newcomer Oliver Jarvis (GB) prevailed by a narrow margin. All three celebrated their first Sebring triumph. For Jarvis, after the GT success with the Audi R8 GRAND-AM at the Daytona 24 Hours, this marked the second victory at a classic U.S. endurance race.

With a gap of only 7.679s, Lucas di Grassi (BR), Tom Kristensen (DK) and Allan McNish (GB) completed the Audi one-two result. A 60-second time penalty due to a collision with a slower sports prototype had been imposed against the 2013-specification Audi R18 e-tron quattro shortly before the end of the third hour.

In 14 races at Sebring with Le Mans prototypes, this marked Audi’s eleventh overall victory. Eight times the brand with the four rings celebrated one-two results. The premium manufacturer’s tally reflects 24 podium places. Ten times an Audi started from the pole position – more often than any other manufacturer in the history of the race that has been held since 1952. The Audi R8, the R10 TDI and the R15 TDI each celebrated victorious debuts at Sebring. With the first victory of a diesel sports car in 2006 and now the first triumph of a hybrid race car Audi achieved two historic victories. Audi took the first podium and the first win at a sports car race at Sebring as well. In addition, Audi regularly used the track in Florida to prepare for the Le Mans 24 Hours.

This time, Audi Sport Team Joest will again stay at Sebring after the race for tests with the Audi R18 e-tron quattro that has been subjected to further development. It still remains to be seen whether or not there will be a future for Audi at the U.S. endurance classic. After the American Le Mans Series (ALMS) and the GRAND-AM Series merged to form the new “United SportsCar Racing” series no LMP1 sports cars will be permitted to run anymore as of 2014.

U.S. fans will be able to see the Audi R18 e-tron quattro soon again in the United States nonetheless. On September 22, the FIA World Endurance Championship (WEC) will visit the Circuit of the Americas in Austin (Texas).

Dr. Wolfgang Ullrich (Head of Audi Motorsport): “That was a perfect finale! I’m very happy about this one-two victory in a race in which both of our cars battled against each other all the way to the finish and delivered a fantastic show to the many fans. The entire squad worked hard, so winning after a long twelve hours is the sweetest reward. After victories with TFSI and TDI technology, Audi on clinching the win today with a hybrid car has continued the success story at this race.”

Ralf Jüttner (Technical Director Audi Sport Team Joest): “This is an outstanding result for what has at least provisionally been our last run here at Sebring. I’m happy about this one-two victory at which either of our two teams would have deserved first place. In the beginning, both cars were running on different strategies. At some point in time they were nearly in parallel and at the finish not even ten seconds apart. We’ve been enjoying the atmosphere here at Sebring with brilliant weather and unique fans. This victory is a nice reward for the whole squad some of whom worked through the whole night before the race and then delivered perfect pit stops for twelve hours straight.”

Marcel Fässler (Audi R18 e-tron quattro #1): “Celebrating Audi’s last race here at Sebring with a victory is simply fantastic. It was an incredibly close race in which both cars would have deserved to win. In the end, we were the slightly more fortunate ones. The pole position yesterday, victory today, great team-mates – things couldn’t be any better today.”

Oliver Jarvis (Audi R18 e-tron quattro #1): “What a start into the 2013 season! This isn’t a dream; it’s a lot more than that. Winning with Audi at Daytona already was an incredible experience. But now an overall victory on my first run at Sebring on top of that is more than I’d ever dared to hope for. A huge thank you to Audi and to Marcel (Fässler) and Ben (Tréluyer) – they’ve been the best team-mates I could imagine.”

Benoît Tréluyer (Audi R18 e-tron quattro #1): “We won the last race of the LMP1 sports cars at Sebring – we’re very proud of this. I think that the fans witnessed a thrilling race in which we had to give one hundred percent to beat our sister car. For us the American dream has come true today. Thank you to Marcel (Fässler) and Oliver (Jarvis) fora great week here at Sebring. Normally, André (Lotterer) is part of our team as well – I’m sure that he’d have been on top of the podium here too.”

Lucas di Grassi (Audi R18 e-tron quattro #2): “This was my first 12-hour race, my first race in the dark and my first run at Sebring – the podium position is a brilliant conclusion of the weekend. It was a very close race with a few incidents and a controversial penalty. More would have been possible for us but as far as I’m concerned the joy about the second place with Audi outweighs anything else.”

Tom Kristensen (Audi R18 e-tron quattro #2): “It was a memorable, tough and fast race. We had the chance ourselves to win today – but we didn’t make it. So, ‘well done’ to the guys from the ‘sister car’ and all other winners here at Sebring. Aside from our second place I’m taking a lot of memories home with me from all the years and the fastest race lap on today’s farewell. It’s for a man who has given me the passion for motorsport.”

Allan McNish (Audi R18 e-tron quattro #2): “What a fantastic race! We arrived here with Audi in order to say goodbye to our fans at Sebring with a thrilling performance – and I believe we managed to do that. It was a fierce battle from the first to the last lap. I’d like to congratulate the team of our ‘sister car.’ On a very personal note, I’m absolutely pleased with the race. Some of my stints were the best I can remember in the past few years.”