Skip to content
We are using cookies for a better user experience.
04/02/20
Neuburg a. d. Donau
Sports

Allan McNish: “It is an incredible journey”

{{ activeItem() }}
Twitter
05/25/20
Incredible #RS #performance: With the #Audi #RSQ3 and #RSQ8, every drive becomes an adventure. Which model would yo… https://t.co/B3tGyuSFGo
05/25/20
Making of #RS: Take a look behind the scenes of #development and find out how @AudiSport shapes the character of th… https://t.co/tPjT3FHQuv
05/24/20
40 years of #quattro means 40 years of participating in #championship contests. Check out the highlights from the q… https://t.co/3PNWOj5zc5
05/22/20
We are committed to #biodiversity and species protection. That's why the #Audi Environmental Foundation is involved… https://t.co/X08aYm3fcb
Audi on Twitter
{{ activeItem() }}
Facebook
05/25/20
Relive the action with the Audi e-tron Vision Gran Turismo on the Nürburgring Nordschleife with our six DTM factory drivers in our latest #RaceHome highlights and broadcast: >> bit.ly/2ZEXi9P #RaceHome #AudiTogether #etron #StayHome #PerformanceIsAnAttitude #RaceAtHome
05/24/20
Welcome to the Green Hell with the Audi e-tron Vision Gran Turismo. See our six DTM factory drivers competing in this special extra #RaceHome round. #RaceHome #AudiTogether #etron #StayHome #PerformanceIsAnAttitude #RaceAtHome
05/22/20
25.378 hours of Nürburgring content in the #DABEI broadcast this weekend, the original date for the 2020 ADAC TOTAL 24h-Rennen Nürburgring. It includes segments with many of our drivers and an extra #RaceHome round on the Nordschleife. Don't miss the viewing action, beginning at 14:30 CEST on Saturday, May 23. >> www.dabei-tv.de >> www.magentatv.de >> www.sporttotal.de #RaceHome #AudiTogether #etron #StayHome #PerformanceIsAnAttitude #RaceAtHome
05/21/20
Audi Sport line-up 2020. >> audi.com/FormulaE >> audi.com/DTM >> audi.com/GT3 >> audi.com/GT2 >> audi.com/GT4 >> audi.com/TCR #PerformanceIsAnAttitude
Audi Sport on Facebook 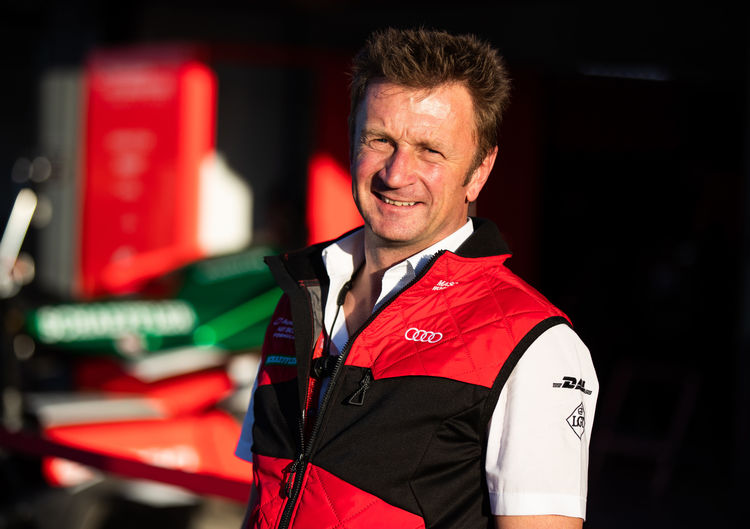 Two and a half years ago, Audi announced its factory involvement in Formula E and Allan McNish as team boss. In an interview, the 50-year-old Scot talks about his first touches with electric motorsport, the special challenges, his future wishes, what he misses and why the series is such a perfect fit for Audi.

First of all, the most important questions these days: How are you and how are you and your family spending your time right now?
We are good, thank you. But like for everybody the situation is very surreal. We are homeschooling our children and our 11-year-old daughter had math and it feels like going back to school. The first homework task was to calculate the circumference of a circle with Pi – which luckily is somehow related to the ride height of a car. So, we got a tire out on our outside terrace and measured the radius and the distance travelled in one revolution. Apart from these challenges which are minimal in the big picture, a lot of the time here at home is spent preparing and waiting for the moment when we can go back to work again.

That gives us time to look back a little bit: In September 2017, you were announced as the team principal. How have you enjoyed your journey so far?
It’s been a very interesting and a very intense one – with a lot of highs, but obviously, also some lows. It doesn’t seem like 2.5 years to me, but rather more like 2.5 weeks. But then on the other hand, if you look at what has happened in that period of time, it includes: coming into the championship as Audi, winning the teams’ title, switching to the Gen2 car and now looking at Gen2 EVO and even the Gen3 car for the ninth season. It is a lot of work, but the ever-growing competition also keeps me and all of us young and agile.

Compared to being a race driver in Formula 1 or in sports cars – is it more demanding to be responsible for such a big team?
I wouldn’t say that it is more demanding, but demanding in a different way. When you compete as a driver in a race like Le Mans, it is the ultimate pressure, I can tell you that. Being at that level is a 24/7 job for 365 days a year. Now as a team principal, I don’t have to be that fit and it is a slightly different intensity but has a feeling of a wider responsibility. Now you have your two drivers and then need to add in the rest of the team at the track and also back home, constantly trying to push everyone forward and not let anyone rely on the successes of yesterday.

Is that the main difference between these two jobs?
One of the main differences is another one: As a young driver, you are seeking out the ultimate goal for yourself. You have only got one chance. Now, as a team principal you have to look at the overall view as a team. And that means you have two drivers and two opportunities. And that also brings in other aspects – especially when you have two different and very strong characters as we have with Daniel (Abt) and Lucas (di Grassi) …

What has been the most challenging part for you so far?
The most challenging part for me was in a way stepping out of the cockpit. I am normally quite clear in my mind: When I close a door, it is then closed and I move on. But, I have to admit that Once a driver always a driver, and you instinctively view it from that position, so not being in the cockpit had it’s challenges. When I watch the onboard footage during a Formula E race day, I’m definitely living it with Daniel and Lucas in their cockpits: do this, do that – you want to control it so much, but you simply can’t. Luckily we have two good guys so I can relax a bit when the race is on.

Being in control yourself: Is that the thing that you miss most while not being a race driver?
No. What I do miss most is the feeling of victory with the podium and champagne. Not because of the podium and champagne, but because of the journey that got you there and that pure enjoyment in everybody’s eyes when you come back with the trophy. Fortunately, we have had this feeling as a team several times since then, for example with Daniel in Mexico or both of our guys in Berlin. That feeling when you celebrate with everyone who brought this together, is incredible – and it doesn’t matter if it’s as a driver or as a team principal.

You do not only have a new role – it is also a role in a completely new way of racing. Have you already got used to electric racing?I never really looked in the mirror when I was a driver and I still think that looking back doesn’t help you much. I have always been interested in new technologies and I always wanted to know what new things I could have in my car to win races. So, when it came to electric cars: Yes, it was a new car, a new style of racing and new tools being available, but the concept is still the same: You have to beat everybody else in order to win.

Can you remember your first-ever experience with Formula E?
I can definitely remember a funny moment when I went to see my first race as a guest in Hong Kong during the third season. I was having tea in the catering tent and almost missed the entire practice session, because I didn’t hear the cars going out. But, from that moment on, it has been quite straight forward getting used to Formula E.

Can you name a moment from the two and a half years that you remember especially?
Everyone would probably expect one of our victories right now. But for me, it’s another event that turned a bad day into something special: I'll never forget how the entire team worked together after Daniel’s accident in Mexico. The guys changed the chassis in record time, changed the battery, went to technical scrutineering and were running while pushing the car down the pit lane to get it back in time for parc fermé regulations – everything to have the car ready for their driver in time for qualifying. In these almost three hours, everyone saw impressively what passion and dedication characterises our team.

Why does Formula E fit so perfectly to Audi?
Because it fits exactly to what we at Audi are doing on the road. Since the old Auto Union days, motorsport has been a big part of the DNA of the brand. And it continues, because Audi always choses racing categories that allow the transfer of race to road technology. If you look back to the summer of the fourth season: We thankfully won the teams’ title in New York City and two months later, the first all-electric Audi for the road was launched in San Francisco. Formula E fits perfectly to the stories that we are telling, but also to the technologies that we are developing.

How do you see the journey and the success of Formula E so far?
It’s an incredible journey. When I retired from racing in 2013, I was asked if I was interested in driving in Formula E. Apart from the fact that I had made my decision, I was skeptical, because I have seen a lot of new championships come and go. But, what I hadn’t seen so far was the dynamic and start-up mentality that these Formula E guys had. It is very impressive to see how they are able to move with all the requirements that manufacturers and racing in the city centers bring along and how they put this strong driver line-up together. And you always have to remember: We are not an established motorsport category with decades of history, like some of the others that we are sometimes compared to. We are a six-year-old child that has just gone to school. I’m looking forward to seeing how it develops and also how we as Audi develop with it.