All Audi cars in front at Le Mans 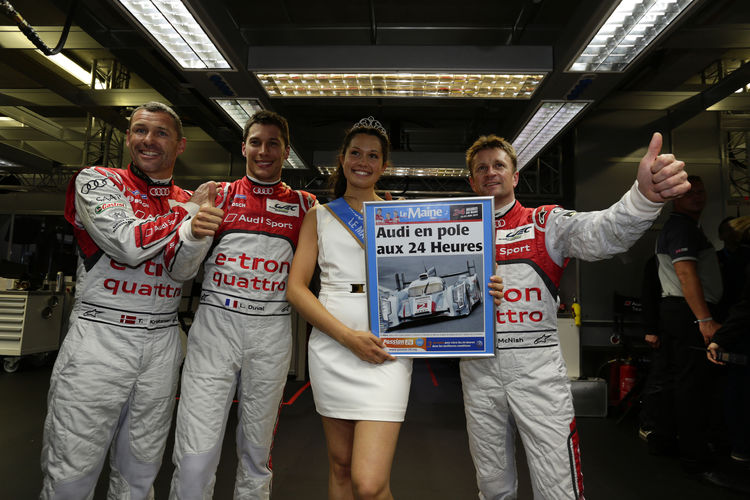 For the first time in the 90-year history of the Le Mans 24 Hours, two hybrid race cars are on the front row. On Thursday night, Audi Sport Team Joest with its three Audi R18 e-tron quattro cars took the three best grid positions for the world’s most important endurance race.

The intelligent combination of TDI power and quattro drive with which Audi celebrated the first-ever hybrid victory at Le Mans last year outperformed the competition on the 13.629-kilometer race track in Western France on both days of qualifying. The squad of the number ‘2’ Audi R18 e-tron quattro decided the battle for the top spot on the grid in its favor. The fastest time of 3m 22.349s (242.5 km/h), which Loïc Duval had achieved right at the beginning of the first qualifying session on Wednesday night, remained unbeaten on Thursday.

Starting the race from position two on Saturday will be the number ‘1’ Audi R18 e-tron quattro of last year’s winners Marcel Fässler (Switzerland), André Lotterer (Germany) and Benoît Tréluyer (France). André Lotterer was one of the few drivers who in the final qualifying session on Thursday night managed to improve over the day before on a track that was just slowly drying after rain showers and, by setting a time of 3m 23.696s, advanced from third to second place.

As on the day before, incidents caused several red flags and shortened the time available for qualifying. Despite the few dry laps all three Audi teams managed to optimize the set-up of the three Audi R18 e-tron quattro cars on Thursday night for the race.

Before the race starts at 15:00, CEST, on Saturday another 45 minutes of practice time will be available in the morning’s warm-up session. 27 channels will broadcast the race live or delayed-as-live, including Eurosport in Europe. Live streaming including onboard footage of the three Audi R18 e-tron quattro cars will be available at www.audi-motorsport.com. Sports car fans can watch the most important endurance race of the year on www.lemans-tv.com as well. Audi is offering a live ticker on Twitter: @Audi__Sport.

The traditional Audi press conference at Le Mans will be broadcast live on www.audimedia.tv  on Friday, starting at 14:00 CEST.

Dr. Wolfgang Ullrich (Head of Audi Motorsport): “This is a nice way to start the weekend. Especially as all three cars set their fastest times during the normal preparation for the race. This is what we concentrated on in all the practice sessions so that all the drivers would be one-hundred-percent happy with the car. The first three positions on the grid are a nice reward for the whole team but, as always at Le Mans, not really crucial.”

Chris Reinke (Head of LMP): “The result looks pretty commanding and is a nice confirmation for the team. But we’re here to win the race, not the qualifying session. Tomorrow, we’re going to tackle the day with concentration and motivation in order to clarify the final details for the race.”

Ralf Jüttner (Technical Director Audi Sport Team Joest): “Today, the conditions were even a bit more chaotic than yesterday. Rain kept setting in and there were interruptions. We managed to make another step after we’d prepared the cars from scratch again overnight. All three driver teams are happier with the car’s balance than they were yesterday. They’re saying that they’ve got a good race car. That’s the most important thing because at Le Mans the qualifying result doesn’t mean very much.”

Loïc Duval (Audi R18 e-tron quattro #2): “Yesterday’s lap time was enough to defend the pole position. That’s why we scored a Championship point that may be decisive at the end of the year. It’s always better to start from the pole position even though that doesn’t really mean a lot at such a long race. Still, we’re happy about the top spot on the grid. Yesterday, we weren’t completely satisfied with the balance of our cars yet, but today the set-up was much better. As the track at the end was faster today than it was yesterday I was a bit worried that we might still lose the pole position. But in the end, we made it. Everything went according to plan. That’s why we’re very happy with the result.”

Tom Kristensen (Audi R18 e-tron quattro #2): “One, two, three, that’s a dream result for Audi just as we’d been hoping for. After Loïc’s (Duval) dream lap yesterday we fully concentrated on the set-up for the race tonight. We’re all very happy with our car. But we’re still going to get together with the guys from the team and from Audi Sport to be really perfectly prepared. To stand our ground against the competition, we need a car that we can drive hard and fast for 24 hours.”

Allan McNish (Audi R18 e-tron quattro #2): “Congratulations to everybody at Audi Sport. We’ve spent a few rough weeks to prepare for this race. But we couldn’t have been off to a better start than on grid positions one, two and three. We’re on the top spot ourselves and have found a good balance in racing conditions for our car. On Wednesday, Loïc (Duval) managed setting a very impressive time on a pretty dirty track – that has made him enter the history books. Tom (Kristensen) and I felt very comfortable in the car as well tonight. We’re well set but, as always, these are very long 24 hours.”

Marcel Fässler (Audi R18 e-tron quattro #1): “Congratulations to our sister car on clinching the pole position.  André (Lotterer) recovered a place tonight and put our car on the front row – that makes me very happy. I finally got to drive myself as well today and was able to prepare for the race in different conditions.”

André Lotterer (Audi R18 e-tron quattro #1): “A brilliant result for the whole team. I’m personally very pleased too because we improved by another  position. But more important was the fact that our Audi felt quite a bit better than yesterday. I didn’t expect us to have such a speed even on used tires. We’d saved the new ones for Ben (Tréluyer) because we were hoping for the track to dry off some more. Our second place is a superb starting base for the race.”

Benoît Tréluyer (Audi R18 e-tron quattro #1): “Naturally, we’d have liked clinching the pole position but we didn’t have a clear lap at the end. We drove very fast intermediate times, so I think that we could have made it. Loïc (Duval), however, was struggling with traffic at the end and could have improved some more as well. But that’s part of motorsport. The whole team did a great job. It’s a brilliant result for Audi, but from now on, we’ve got to concentrate on the race.”

Lucas di Grassi (Audi R18 e-tron quattro #3): “All in all, it was a good qualifying session, even though there was more potential for our car at the end. I had a best time in the first sector at the end and was also running really well in the middle sector but in the final sector I got stuck in traffic. Having three cars at the front is a very good starting base for Audi but we all know that the race is very long.”

Marc Gené (Audi R18 e-tron quattro #3): “In the third qualifying session I was only able to do one lap, but that one was in the dark. Today, Lucas (di Grassi) showed that our car is fast, as I did yesterday. We feel well set for the race.”

Oliver Jarvis (Audi R18 e-tron quattro #3): “What we can say after qualifying is that we’ve got a very good car. We were running fast even on used tires. On new tires and a clear lap even the pole position might have been possible, so we’re starting the race with confidence.”