After one-two lead up until the last lap: EKS Audi Sport narrowly beaten 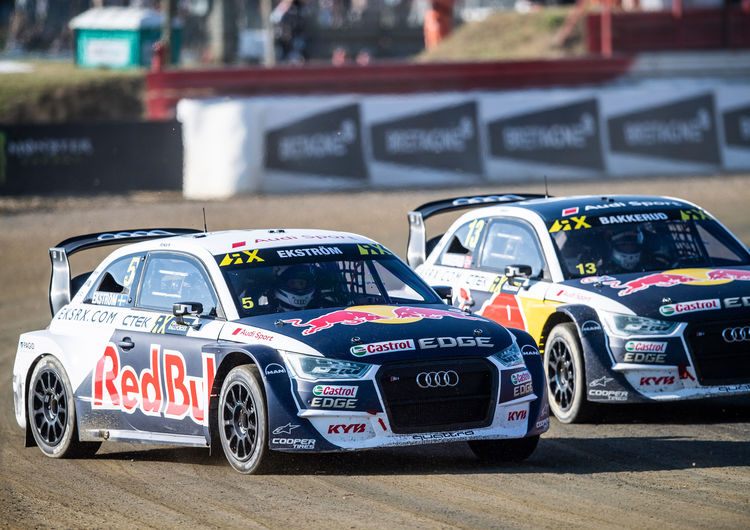 A thrilling race weekend with a decision on the final meters: In round eight of the FIA World Rallycross Championship season, Andreas Bakkerud and Mattias Ekström just barely missed scoring the first victory this season for EKS Audi Sport, but regained second place in the teams’ classification in front of 80,000 enthusiastic fans.

At Lohéac, both Mattias Ekström and his teammate, Andreas Bakkerud, shone with exemplary times and outstanding starts throughout the entire race weekend: On the extremely fast track, they made it into the semi-finals on finishing the intermediate classification in second and third in the 580-hp Audi S1 EKS RX quattro. First, Mattias Ekström won his semi-final in commanding style and in the second heat, Andreas Bakkerud followed suit with a second triumph.

Both Audi drivers started to the final from the front row. Andreas Bakkerud took the lead in front of Ekström. The Audi drivers defended their top two positions up until the final lap. However, on returning from the Joker lap, Bakkerud had to get in line between Johan Kristoffersson and Petter Solberg (both Volkswagen) and missed victory by a mere 0.34 seconds. Mattias Ekström took position four. In the teams’ classification, following the race in France, EKS Audi Sport advanced to second place again behind Volkswagen.

“I’m disappointed about us having missed a one-two result by such a narrow margin, but am taking a lot of positives home from France,” commented Andreas Bakkerud. “We had good results in the preliminary races, managed to win our semi-finals and now I’m in second place of the drivers’ standings.” Team owner and driver Mattias Ekström added: “We had competitive cars and started from the front row, but in the end our pace wasn’t quite enough to take victory home. Now we’ve got our second place in the teams’ classification back and are going to fight even more intensively for victory in the last four rounds.”

The next race will be held in just two weeks’ time: Round nine of the season will be held at Latvia’s capital Riga from September 14 –16.