Skip to content
We are using cookies for a better user experience.
08/23/21
Neuburg a. d. Donau
Sport 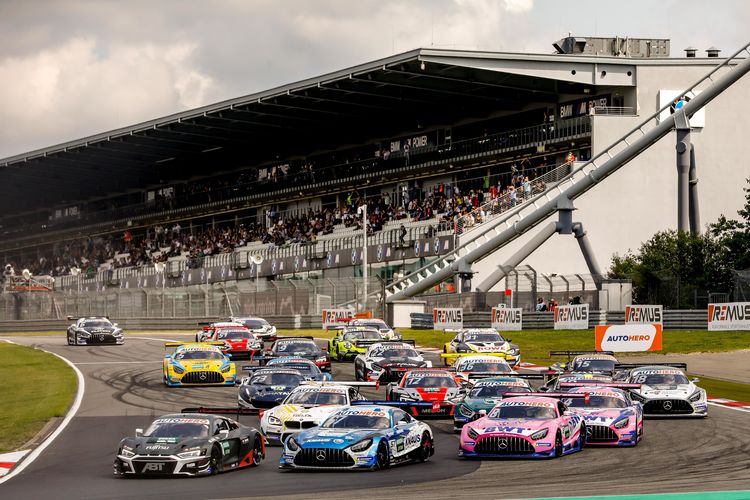 At the season’s midpoint, the Audi R8 LMS is the car to beat in the DTM: After Kelvin van der Linde’s third victory and Team ABT Sportsline’s 70th overall in the DTM, the South African and his squad are leading the standings. The Audi R8 LMS GT4 and the Audi RS 3 LMS also returned from their races in numerous countries with many trophies.

Strong performance and nice recovery at the Nürburgring: With Kelvin van der Linde and Mike Rockenfeller, two Audi drivers offered the audience thrilling racing with the Audi R8 LMS on the fourth race weekend of the DTM. In Saturday’s race, van der Linde had started from position one after clinching his third pole position this season and set the fastest race lap. Despite good pit stop strategies by his rivals, he prevailed in the end with a 13.5-second advantage over Mercedes driver Philip Ellis. Teammate Mike Rockenfeller had to avoid an accident right after the start and dropped to 21st place out of 23 competitors. With a strong driving performance and a clever strategy, the 2013 DTM champion still improved to third position. After four of eight races, ABT Sportsline is in a promising position: The team from the Allgäu region leads the team standings with a 28-point advantage. Kelvin van der Linde is now 33 points ahead of Mercedes driver Maxi Götz in the drivers’ standings.

Podium at Le Mans: Team WRT achieved the first podium result for the Audi R8 LMS in the Le Mans Cup race series on the legendary Le Mans race track. The fourth event of the season called “Road to Le Mans” took place on the famous French circuit in the run-up to the Le Mans 24 Hours. Charles Weerts and Jean-Denis Delétraz managed a conciliatory end to the weekend in the second race. In the first race, Weerts, who was leading the race, dropped back to seventh place due to a safety car phase. At the start of the second race, his Swiss teammate Delétraz kept close contact with the front runners. After the driver change, Charles Weerts took up the chase, posted the fastest race lap and improved to third place.

Two successes at the Slovakiaring: Team Audi Sport Slovakia celebrated two victories on the fifth race weekend of the Eset Cup Series. In the mixed sports and touring car series, the customer team had opted for the E1 class instead of the GT3 category with the Audi R8 LMS and was therefore not subject to the Balance of Performance. Christian Malchárek won the first sprint at his home race on the twisty Slovakiaring with an 18.6-second advantage. In the second sprint, Jirko Malchárek took over the cockpit and also crossed the finish line first after 13 laps.

Audi R8 LMS successful in South Africa: Team Stradale Motorsport fielded an Audi R8 LMS in GT3 version for the first time in the South African GT Challenge. On the 2.48-kilometer short Aldo Scribante race track, Charl Arangies clinched second place in the second 60-minute race. In the third race, the privateer driver had become even better accustomed to the GT3 sports car and celebrated overall victory with a lead of 0.6 seconds.

Full points in the DTM Trophy for the first time: Team Heide-Motorsport recorded full points in the DTM Trophy for the first time with the Audi R8 LMS GT4. On the third race weekend at the Nürburgring, Lucas Mauron improved from sixth position to second place at the start of the second race. A battle for the lead then broke out, with the Swiss in the Audi and BMW driver Michael Schrey taking turns at the front several times. Mauron eventually prevailed and crossed the finish line with a lead of 4.6 seconds. However, a time penalty threw him back to second place. However, since race winner Marcel Marchewicz took part as a guest entrant, Lucas Mauron is the first Audi privateer to score the full 25 points in a DTM Trophy race this year.

Two podium finishes in Scandinavia: Team Poker Racing for Charity returned from the second race weekend of GT4 Scandinavia with two trophies for the first time this season. Magnus Gustavsen had started the first race in fifth place in the Audi R8 LMS GT4 on the Gelleråsen circuit. After the pit stop Tony Rickardsson took over the cockpit and improved up to second place. In the second race, the two Swedes achieved third position in the field of ten competitors with their seven brands.

Success in South Africa: Marius Jackson contested a guest start in South Africa in the South African GT Challenge with his Audi R8 LMS GT4. As the only entrant in his class, he finished seventh overall with his GT4 model in the second race on the Aldo Scribante circuit amid more powerful GT3 sports cars.

First victory for Kevin Engman in Sweden: On his first race weekend in the Audi RS 3 LMS, Kevin Engman was delighted with his first victory in the TCR Scandinavia. On the Gelleråsen circuit, he had started the race in second place behind teammate Tobias Brink. Brink failed to get off to a good start and dropped back to third, allowing Engman to take the lead. When Brink overtook Volkswagen driver Hugo Nerman during the race to take second place, the Audi privateer team Brink Motorsport was assured of its first one-two victory this season. At the season’s halfway point, Tobias Brink in the Audi RS 3 LMS is third in the standings.

Two podium places at the Slovakiaring: Bartosz Groszek was the best Audi privateer in both races on the fifth race weekend of the TCR Eastern Europe. In the first sprint, the Pole steered his Audi RS 3 LMS to second place, in the second race he finished in third position.

Second place in Moscow: Egor Orudzhev recorded a second-place finish in the fourth round of the TCR Russia at the Moscow Raceway. The privateer driver had started the first race from pole position in the Audi RS 3 LMS but had to admit defeat to his opponent Pavel Kalmanovich in a Cupra on lap 3. Only 0.8 seconds behind, Orudzhev from the Lukoil Racing Team crossed the finish line in second place after 13 laps. Dmitry Bragin remains the best Audi privateer in the standings in second place.

Three podium places in Estonia: The Finnish squad LMS Racing was the best Audi customer team in the BEC6H endurance race at the Pärnu circuit. Antti Buri and Kari-Pekka Laaksonen finished second in their class in the Audi RS 3 LMS after six hours of racing. At the same event in Estonia, two sprints of the BaTCC race series were also on the calendar. Valters Zviedris finished the first race in the Audi RS 3 LMS in third place in the TCR class. In the second race, the privateer driver of Team LV Racing won the TCR classification with a 0.9-second advantage over VW driver Mikk Maaten.

Third place twice in Belgium: Team QSR Racing School was on the podium twice in the Belcar Endurance Championship. Joël Uylenbroeck crossed the finish line in third place in his class in the Audi RS 3 LMS in both races on the fourth race weekend at Zolder.