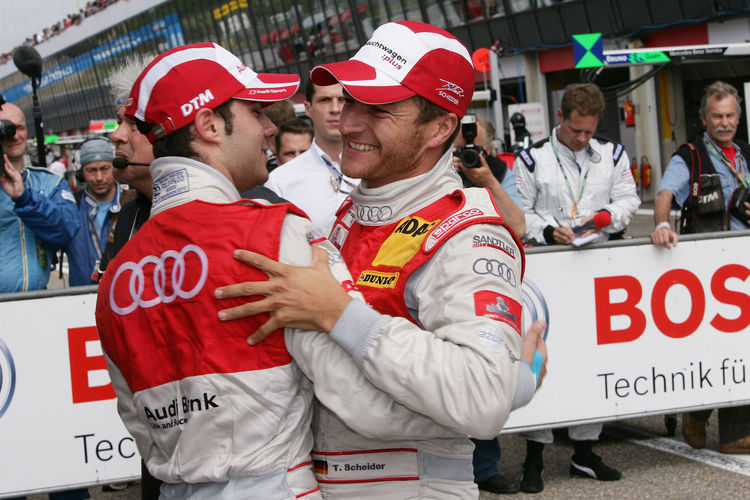 The champion is back – and how! With a record lead of almost seven tenths of a second Audi driver Timo Scheider commandingly clinched the pole position for the DTM race at Zandvoort (Sunday, starting at 1:45 p.m. – local time – on “Das Erste”). Audi thus continued an impressive string of qualifying results: for the fourth consecutive time an Audi A4 DTM will start from the pole position on the Dutch North Sea coast.

Timo Scheider had to wait for this moment exactly 60 weeks. The reigning DTM Champion clinched his last pole position on June 27, 2009 at the Norisring in Nuremberg. On his favorite track at Zandvoort, where he took his first DTM pole position in 2003 and his first as an Audi driver in 2007, Scheider delivered an impressive comeback. With a perfect qualifying lap he relegated last year’s winner Gary Paffett to position two by 0.696 seconds.

“We’re back, that’s a good feeling,” said Scheider with tears in his eyes. After a difficult start to the season the title defender made it into the final qualifying segment (Q4) for the first time this year and was able to fully take advantage of the qualities of his Audi A4 DTM and secured his third pole position at Zandvoort. In total, it was his eighth in the DTM. “I arrived here with a good feeling – and so far it hasn’t misled me,” says Scheider. “Now I want to finally win here tomorrow too, because I’ve always wanted to do that at Zandvoort.”

By taking its third pole position in total this year, Audi has equalized Mercedes-Benz in the qualifying duel which now reflects a score of 3:3 and delivered a good team performance on the whole. With Miguel Molina, Mattias Ekström and Oliver Jarvis on grid positions four, five and six, four Audi A4 DTM cars of Audi Sport Team Abt Sportsline will start into the race from the first three rows.

“I’m particularly pleased with Timo’s (Scheider) pole position,” commented Head of Audi Motorsport Dr. Wolfgang Ullrich. “Timo suggested as early as in the past few races that he shouldn’t be written off. Today, he impressively confirmed this. And the performance of our youngest driver, Miguel Molina, is remarkable as well.”

The driver who at the age of 21 is the youngest racer in the field finished among the top four in qualifying for the first time in his still young DTM career and in fourth place was the quickest driver of a 2008-specification car.

Mattias Ekström will start into the race from grid position five. After a dominant fastest time in the morning’s free practice the Swede experienced a roller-coaster ride in qualifying: in Q1 he needed two sets of tires in order to advance, and in Q2 he was the only driver to just require one. After two small mistakes in Q3 the Swede will start into the race from position five. Oliver Jarvis completes the Audi quartet on the first three rows of the grid on position six.