A lap at Le Mans with the Audi drivers 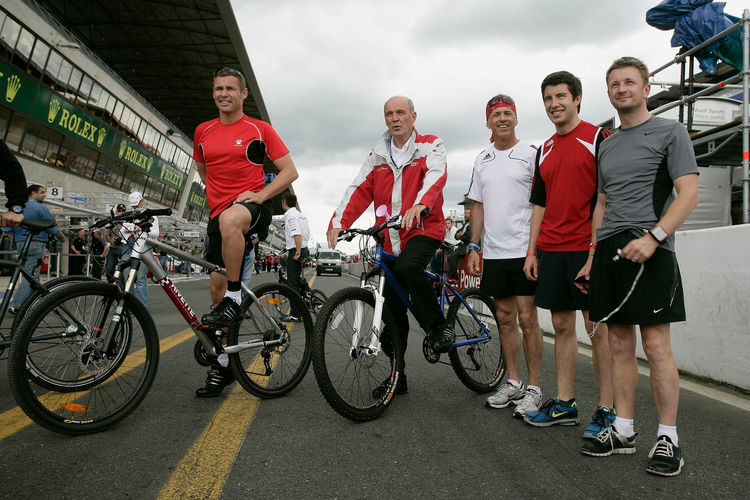 The 13.629-kilometer “Circuit des 24 Heures” is considered one of the world’s most fascinating race tracks on which no testing is possible. The nine Audi drivers talk about the key sectors – in alphabetical order from B like Bernhard to T like Tréluyer.

Timo Bernhard about the Dunlop Chicane: “It’s nice to drive past the grandstands at the start and finish. At the right, there’s the crew and the pit lane with the pit board which you’ve got to keep watching. At the left, there are the full grandstands. That’s where you can see the enthusiasm of the fans for this race. The first turn is almost flat-out. The difficult part about it is that you’ve got to start braking immediately afterwards to turn into the Dunlop Chicane. You’ve got to brake while you’re still inside the turn, that’s why the rear becomes pretty light. The chicane itself is very slow. You mustn’t take a shortcut across the curbs. Although that’s faster, you can suffer a puncture in the process or damage the front splitter.”

Dindo Capello about the S du Tertre Rouge: “The S-turns of Tertre Rouge are the first corners after the transition from the Bugatti circuit to the long track. The tarmac changes here and you can feel this pretty strongly. You approach this turn at about 250 km/h. You’ve got to brake and shift down two gears. When turning into the first left-hander, there’s a big bump in the track which can make the car unstable. You mustn’t drive over the inside curbs too aggressively because it’s easy to damage the suspensions or a rim there. The best thing is to drive as close to the curb as possible because that’s where the bump can be felt the least.”

Romain Dumas about Tertre Rouge: “This turn isn’t as easy as it looks. You approach it pretty fast and have to take a lot of momentum out of the corner with you because this corner is followed by a long straight. We all remember what happened to Mike (Rockenfeller) here two years ago. The outside curbs in this turn aren’t flat but pretty aggressive. If you drive over them too hard you can lose the car – and the barrier isn’t too far away, considering our high speed. As in the Porsche corners, you’ve got to always plan a few safety reserves in this turn – because if you make a mistake here, your race is over.”

Marcel Fässler about the Hunaudières Straight: “The Hunaudières Straight is very long. Particularly at night you get the feeling as if it would never end. Especially when you’re alone on the track, without a car in front of or behind you, it feels extremely long. The straight itself is actually not as demanding as one might think. But of course you’ve got to be fully concentrated all the time because there are pretty big speed differences between the prototypes and the GT cars. It’s difficult to nicely take the speed into the chicanes because we drive with very little downforce at Le Mans. The exit of the second chicane is tricky. Especially when it’s wet, it’s a pretty hairy situation.”

Tom Kristensen about Mulsanne: “You arrive here with almost top speed. Just before the corner there’s a small bend and a bump – almost exactly at the place where you’ve got to brake. That’s why the car can become pretty unstable while you’re braking. You take the corner in second gear and at the exit you can drive over the curbs a bit. The characteristic part about it is that you’re coming from the wide Hundaudières Straight on which you can even use the red areas at the right and left of the track and then, at Mulsanne, you suddenly turn onto a much narrower part of the circuit where it’s very difficult to overtake a car in front of you.”

André Lotterer about Indianapolis: “Indianapolis is a corner which is great fun and one of the favorites of many drivers. You arrive at very high speed and enter the turn flat-out at 300 km/h. You only brake inside the turn and can feel the high centrifugal forces in the process. You get a lot of feedback from the car. But you mustn’t enter the following left-hander too fast because it’s easy to slip out of it. It’s possible that you’ll have to wait until after Arnage to overtake a slower car.”

Allan McNish about Arnage: ”You arrive at Arnage from a very quick passage at a speed of over 300 km/h and have to brake down to about 80 km/h for the right-hand turn there. That’s not only hard for the car but also for yourself, in your mind. The brakes are pretty hot from braking into the previous corner. The tarmac is often pretty slippery. If you make a mistake you’ll quickly end up in the guard rails because the run-off area is very small. The exit of the corner is not as difficult any more as it used to be because the bumps have been leveled and the track is a bit wider now. Still, you’ve got to be careful because the rear of the car may get out of control on the curbs. You’ve got to be precise and accelerate as early as possible.”

Mike Rockenfeller about the Porsche Corners: “The Porsche Corners at Le Mans are absolutely my favorite passage. You arrive at top speed and brake just slightly. When braking into the turn the track is a bit bumpy. You need a very neutral and good car to turn in, especially at the front wheels. These are the corners where you can squeeze out some time with a little risk and courage, but it’s difficult in the race when you’re in traffic. That’s when you drive past the others on rubber on the outside. You can lose or gain a lot of time in the process. In this respect, it’s an important place. This is where you can tell whether the aerodynamics of a car work or not.”

Benoît Treluyer about the Ford Chicane: “The chicane looks pretty simply but it’s actually a difficult turn. The first part of the chicane is pretty quick. Braking into it is very interesting. You turn in at the level of the pit lane entrance and then you can drive over the curbs pretty fast on the inside. At the exit of the second part it’s important to find good traction in order to take as much speed as possible with you on to the start-finish straight. You’ve got to be careful not to run across the curbs too much because you can damage the splitter or other parts of the car. The crucial thing is to properly put the enormous power of the TDI engine on the ground without taking too much of a shortcut. It’s not easy to find the right rhythm. But it’s fun.”