55th pole position for Audi in the DTM 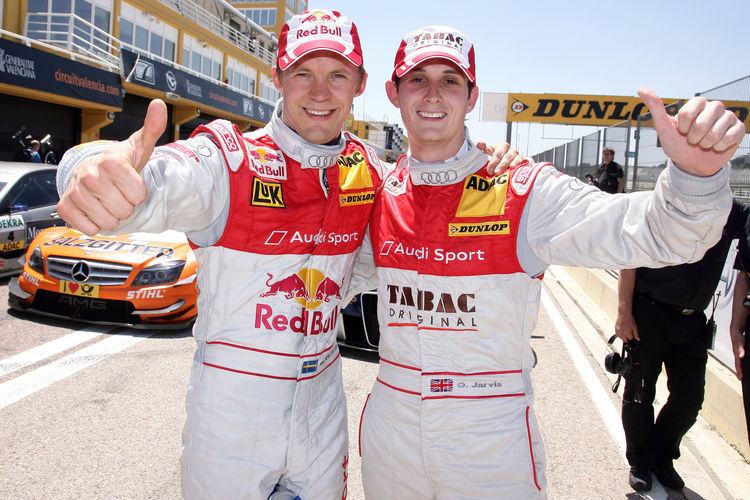 In blazing heat it was a Swede who was best at keeping his cool: Mattias Ekström clinched the 55th pole position for Audi in the DTM at Valencia (Spain). His British team colleague Oliver Jarvis completed Audi’s exploit by taking position three. A total of eight Audi A4 DTM cars will start from the top eleven positions at the DTM’s debut at Valencia on Sunday.

At 28 degrees centigrade in the shade and constantly increasing tarmac temperatures, which were above 50 degrees at the end of qualifying, the 2004 and 2007 champion was 16 thousandths of a second quicker than Bruno Spengler in the best Mercedes on the crucial lap. My Audi works really well, I’m feeling very comfortable,” raved the Swede. “The track kept getting warmer and there was less and less grip. In Q3 I was standing crosswise in the fast first turn and was pretty shocked. In Q4 I wasn’t sure if I’d make it. That makes it even nicer to be in front now.”

For the Swede this was the 15th pole position in his DTM career – and a belated birthday gift for his mother Agneta who turned 60 on Thursday and had the chance to do three laps with her son as a passenger in the Audi A4 DTM on Friday evening. “This makes the pole even sweeter,” said Ekström. “And maybe tomorrow things will even be better...”

With Oliver Jarvis on position three and Mike Rockenfeller, Miguel Molina, Alexandre Prémat, Martin Tomczyk, Timo Scheider and Markus Winkelhock as a solid Audi block on grid positions six to eleven, Audi managed to achieve a strong qualifying result overall. “We can be very pleased,” said Head of Audi Motorsport Dr. Wolfgang Ullrich. “We’ve got seven cars on the first five rows of the grid and Mattias (Ekström) on the pole position. Of course performance in the race is an altogether different subject but I think that we’re in a pretty good position. We collected a wealth of data during the past few weeks to get a handle on the tire problems – also with assistance from our colleagues in Technical Development, our Quality Inspection department and two universities. Our aim is to convert the qualifying result into a good race result.”

Spain seems to be good territory for Audi in the DTM on the whole: the most popular international touring car racing series is visiting Spain for the fifth time – and for as much as the fourth time an Audi A4 DTM will start from the pole position here.

Miguel Molina is the first ever Spaniard to contest the DTM. And at his home round the 21-year-old shone with grid position seven as the second-best driver of a 2008-spec vehicle with a small gap behind his brand colleague Mike Rockenfeller. “I can be very pleased with position seven in my second DTM qualifying,” said Molina. “By signing him, we’ve brought a great talent into the DTM,” enthused Dr. Wolfgang Ullrich too. “I’m hoping that he’ll be able to continue putting his talent onto the track.”

Audi’s good qualifying result is particularly important because overtaking on the 4.005-kilometer track on the outskirts of Valencia is considered to be very difficult. For the day of the race, as well, similarly high temperatures have been predicted. Audi completed several long runs in the free practice sessions on Friday and Saturday with various suspension set-ups and tire inflation pressures and gathered important data about the performance of the identical tires prescribed by the organizer.