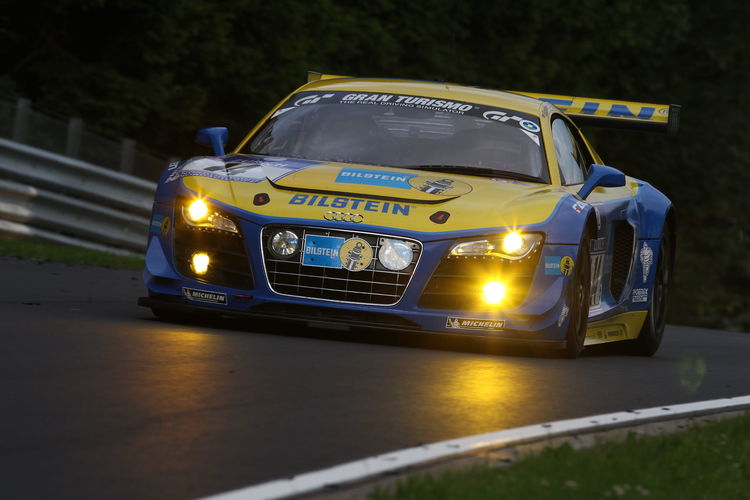 Audi tackles the 24-hour race at the Nürburgring from grid positions seven, nine, twelve and 18. Marc Basseng recorded the fastest lap of an Audi R8 LMS in qualifying.

The fastest 18 cars were covered by only ten seconds after six hours of qualifying around the 25.378 kilometer circuit, the world’s longest race track. These included all four Audi R8 LMS fielded by the Audi Sport teams Abt Sportsline and Phoenix, which concentrated primarily on race preparation during both practice days.

“We know that we don’t have the fastest car on the grid with the way the Audi R8 LMS is currently classified, which is why we must rely specifically on consistency and reliability,” explained Head of Audi Motorsport Dr. Wolfgang Ullrich. “Our main focus of attention was therefore on finding an optimum race set-up and to have well-balanced cars. I think we achieved this.”

This was also confirmed by Marc Basseng who recorded the fastest Audi R8 LMS lap of 8m 28.555s in Friday’s second qualifying at the wheel of the Audi Sport Team Phoenix Audi R8 LMS #14. “The car is even easier to drive this year,” said Basseng. “This is a good base for the race.”

Marc Basseng, Marcel Fässler and Frank Stippler start the race on Saturday from seventh on the grid. A row behind and ninth on the grid is the fastest Audi Sport Team Abt Sportsline R8 LMS with the three Audi juniors Christer Jöns (23), Luca Ludwig (22) and Christopher Mies (22) who are supported by old-hand Christian Abt. Christopher Mies set the fastest lap (8m 30.169) of start number “17” immediately at the start of second qualifying.

Christian Abt, Mattias Ekström, Timo Scheider and Marco Werner (Audi R8 LMS #16) start from twelfth on the grid. Marco Werner, who took pole position last year, recorded a time of 8m 31.536s on Thursday evening which put him in fourth position after first qualifying. On Friday start number “16” did not improve. Marco Werner did not get a clear lap at the start. After almost an hour it started to rain and the circuit did not dry completely.

The rain also prevented the team in Audi R8 LMS with start number “15” (Christopher Haase/Marc Hennerici/Frank Stippler/Markus Winkelhock) from claiming a better grid position than 18th (8m 33.216s). Christopher Haase spun into a gravel bed on the Grand Prix circuit at the start of second qualifying due to overbraking on the rear axle. The R18 LMS ran smoothly again after changing the brake master cylinder and hydraulic brake booster.

Start number “17” also lost valuable practice time on Thursday. Just before 21:00 Christian Abt was touched at the rear on the right when overtaking before being subsequently hit on the driver’s side. After successfully repairing the car the team decided not to send the car back out onto the track on Thursday, but in fact to prepare calmly for final qualifying and the race.

The 24-hour race at the Nürburgring is broadcast live in full length on www.audi.tv from Saturday 15:30.