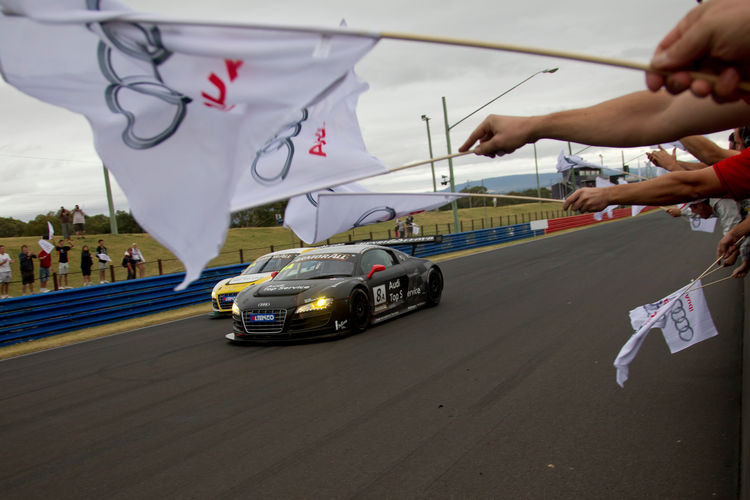 In its inaugural race of the 2011 season, Audi celebrated the biggest possible success since the customer sports program has been restructured: The R8 LMS won its first of three endurance races this year. After locking out the front row on the grid, Audi race experience Team Joest celebrated a 1-2 win far away from home in a race that went down to the wire. The Audi R8 LMS that has been developed by Audi specifically for customer sport activities was the most reliable and the fastest car in the field. The GT3 sports car achieved a new lap record at Mount Panorama in Bathurst and took the 65th win of its career that spans back only two years.

The awesome 6.213 kilometre rollercoaster circuit at Mount Panorama demanded everything from the team. Thanks to consistently strong performances in terms of tactics and driving, the team eventually won after persistent rain showers in the first part of the race and numerous safety car periods. A constant struggle for leadership endured between the Audi R8 LMS cars and a local Porsche team as they fought for first place throughout the 12 hours. However, in the end, Audi’s closest rival was beaten by only one lap. The number 8 Audi R8 LMS won after a slow puncture decided the race. This incident meant Craig Lowndes had to do an additional stop in car number 7 that was not counted as a regular pit stop according to the rules. After a strong chase, the Australian touring car legend fought for victory up to the final gruelling minutes.

Thus Audi demonstrated a leading performance in front of future customers in the Asia Pacific region after the Audi R8 LMS has clinched seven championship titles across Europe in the past 24 months already. As of this year, quattro GmbH develops the customers sports race car powered by a 411 kW engine and is also in charge of sales and technical support for customer and importer teams worldwide.


Quotes after the race

Romolo Liebchen (Head of customer sport, quattro GmbH): “It couldn’t have been better for Audi. That was a successful beginning of a new era in the customer sports program with quattro GmbH. A 1-2 win on such a demanding circuit once more underlined the qualities of the R8 LMS. In addition to that, the team and the drivers have done a tremendous work. The fact that the Audi R8 LMS was easy to handle even on slick tires in rain just showed how good its concept is. Plus we have achieved a new lap record. First of all, our customers will profit from that as they receive a GT3 car that is versatile, reliable and relatively easy to maintain. I hope that we can persuade even more people to become our customers after this strong showing.”

Ralf Jüttner (Technical Director Audi race experience Team Joest): “Very honestly: this race was almost more nerve-wrecking than quite a few Le Mans races. A true thriller! As predicted, it took quite a while until we got a clear idea of everyone’s performances. There were different pit stop rules for different cars. It was exciting up until the end. The Porsche that finished third also had a fair chance as did one Cup car. Our number 7 car just had bad luck. Without the puncture, it could have clearly won the race. We drove for quite a long time on slick tires in wet conditions. The experience of our ‚local heroes’ paid off. In these conditions, they were faster sometimes by a few seconds. Thus, the Australians built up a considerable lead. They were unfortunate to lose it due to the additional stop. As this incident happened shortly after a mandatory pit stop, it didn’t count – there has to be a minimum of ten laps in between them. It got tense towards the end as the guys really went for it. Both cars were free to race for victory. Ten minutes before the end, there was a splash and dash pitstop for the number 8 car. We’ve guided the cars to the finish in this order in the remaining three laps. A big thank you also to Mark Eddy. Nine of his team members supported us in Bathurst. Within five days, we’ve gelled into a fantastic team.”

Marc Basseng (Audi Top Service R8 LMS #8)
“Incredible! It was my first win with Audi in an endurance race lasting 12 hours. The car was perfect. Such a close fight inside one team – unbelievable how evenly-matched those two cars have been. I’m over the moon.”

Christopher Mies (Audi Top Service R8 LMS #8)
“I’m speechless! After twelve hours, we’ve won by a margin of 0.7 seconds. Both cars fought for victory. Craig Lowndes tried everything in the number seven car. In my stint, I managed to set the fastest lap time. I really drove my socks off. At the end, it was enough for Marc, Darryl and myself to win. I’m delighted. Now I’ve clinched my first win in an endurance race with Audi.”

Darryl O’Young (Audi Top Service R8 LMS #8)
“A wonderful weekend. The R8 LMS was fantastic, as were my team mates Christopher Mies and Marc Basseng. Towards the end, I was under immense pressure. Then I made a mistake in the pit exit and touched the wall. Thus the number seven car had a chance to put pressure on us. I didn’t want to risk anything in that situation. But when it became clear that I had to do one more splash and dash pitstop, I went flat out again. The 1-2 win is a great result. Audi race experience Team Joest has worked perfectly.”

Mark Eddy (Audi Australia R8 LMS #7)
“That was a fantastic race for both the German and the Australian Audi line-up. For Audi to get a 1-2 victory in their maiden race at Bathurst is just a testament of how good the R8 LMS cars are. I would be glad if Audi would come back again to Bathurst.”

Craig Lowndes (Audi Australia R8 LMS #7)
“The weekend was sensational. It was a great weekend for Australians to be involved. It was unbelievable that Audi would consider to coming here to Bathurst. It’s our grand final, it’s our track that we love so much. It’s great for Audi and Audi race experience Team Joest to come and campaign two cars at this event. We didn’t know the car, Marc, Christopher and Darryl didn’t know the circuit. I think we combined very well as a team. And we got a result that the team deserved, a 1-2.”

Warren Luff (Audi Australia R8 LMS #7)
“It was an amazing day. Full credit to Audi and Team Joest. They’ve just done an amazing job from the moment they’ve arrived. They’ve given us great cars and are a great team. And we’ve been up to produce a great result for everyone. It’s been great to have been part of this. I hope it’s not the last time that I race an Audi R8 LMS. It’s an amazing car. It’s the best car I’ve ever raced. Audi have got such a great history in endurance racing. I hope that I can become a part of it.”