1-2 victory and DTM title for Audi 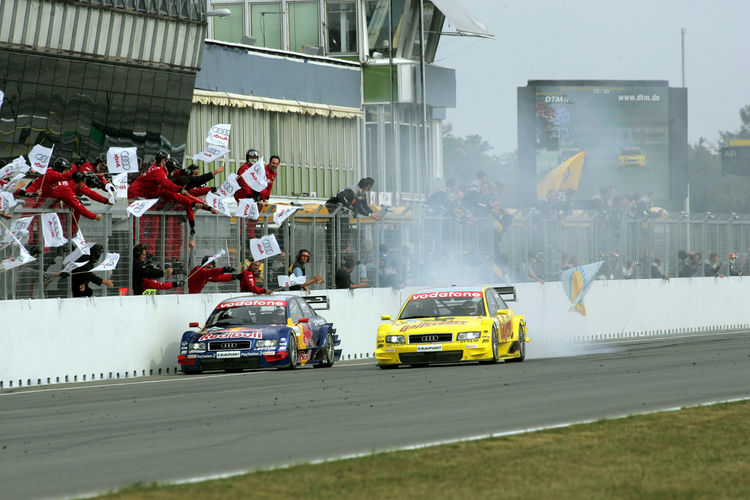 Audi works driver Mattias Ekström achieved a dominant victory in the penultimate race of the DTM season at Brno, locking in his title even before Europe’s most popular touring car series will draw to a close this year. 35,000 spectators had turned out at the demanding circuit in the Czech Republic throughout the weekend to witness another impressive performance of the Audi A4 DTM and Audi’s third consecutive 1-2 victory, completed by Tom Kristensen’s second-place finish. Emanuele Pirro – who came in fifth – claimed the best result of the season so far for Audi Sport Infineon Team Joest. Audi Sport Team Abt secured an early first place in the DTM teams’ standings as well, despite the fact that Martin Tomczyk’s chances for a second-place finish were destroyed when he was forced to retire after being touched by a rival. In addition, Audi have assumed the lead in the manufacturers’ standings prior to the finale at Hockenheim on 3 October.

With their early title win in the DTM, AUDI AG are continuing their impressive series of superior exploits in motorsport. Last weekend, the Audi R8 celebrated its 50th victory in its 60th sportscar race. Now, the brand’s return to the DTM at factory level has resulted in Audi immediately claiming the title with the A4 DTM car.

Mattias Ekström (Audi Sport Team Abt / Audi A4 DTM #5)
1st place
“It’s always been my biggest dream to clinch the title in the DTM. Today, I’m simply overjoyed. My thanks go to Audi Sport for the fantastic Audi A4 DTM, to my Team Abt Sportsline for their perfect performance in the pits and to my team-mates for all the backing they’ve given me during the season. I know people are saying that I tend to avoid long parties – today, I’ll prove them wrong, though.“

Tom Kristensen (Audi Sport Team Abt Sportsline / Audi A4 DTM #12)
2nd place, + 2.313s
“Mattias is a truly deserving champion. He’s a great guy. He’s a natural talent. He has car control. And he’s got lots of experience in the DTM and in the team. These are five things he’s put together perfectly. And if a Dane has so many positive things to say about a Swede, that really means something. Today, my A4 was better than ever. This has enabled me to complete Audi’s 1-2 victory.“

Emanuele Pirro (Audi Sport Infineon Team Joest / Audi A4 DTM #44)
5th place, + 33.220s
“In many of the races this year we were defeated below our actual performance level. Today – finally – we were not struck by bad luck and thus able to take home a good result. This has been very important for the whole team. Congratulations, as well, to Mattias. This has been a big day for Audi and a good one for Team Joest.“

Christian Abt (Audi Sport Team Abt Sportsline / Audi A4 DTM #11)
13th place, + 55.904s
“Normally – after two or three races – a team will agree on a team strategy. But Mattias didn’t need any of that this year, because he’s simply been the strongest driver of the whole field. I’m proud of my team, because they’ve made no mistakes during the pit stops in any of the nine races and have therefore contributed their part to this success. Today, my joy about the title win outweighs my anger about being touched by a rival, which ruined my chances of finishing in the points.“

Frank Biela (Audi Sport Infineon Team Joest / Audi A4 DTM #45)
14th place, + 56.885s
“For me, the race was practically over right after the first corner when I was forced into a spin and then had to follow the rest of the field. ’Well done’ to Mattias: during the course of the season he kept working to achieve an excellent starting position and locked it all in today.“

Martin Tomczyk (Audi Sport Team Abt / Audi A4 DTM #6)
retired (accident)
“Of course, I have mixed emotions about today’s race, but the positive ones are clearly dominant. Mattias deserves the title, and I think that both of us deserved winning the team title as well. We have worked together extremely well as a team this year. Having been forced to retire here is really too bad for me, as it has cost me my fourth place in the championship. In the end, though, Christijan Albers shot himself in the foot by what he did.“

Hans-Jürgen Abt (Team Director Audi Sport Team Abt Sportsline): “Congratulations to Mattias. He joined us in 2001, immediately became a member of our family and absolutely deserves this exploit. From a wholehearted team player, whose first-ever DTM victory in 2002 secured our title, he has evolved to the level of a worthy champion. I want to thank every one of our mechanics for their professional performance, without which we wouldn’t have been able to achieve this triumph. Today, we’ve managed to claim the team championship title in the DTM – and that’s the best reward of all.“

Ralf Jüttner (Technical Director Audi Sport Infineon Team Joest): “I share Audi’s and Mattias’ happiness about the championship title. And, of course, I’m happy about the fact that we had a good race as well. Emanuele has deserved the fifth place he clinched. His start was absolutely fantastic, and the team did perfect work: we had four good pit stops and the right strategy. It’s too bad, though, that Frank – yet again – was a victim of bad luck in a major way.“

Dr Wolfgang Ullrich (Head of Audi Motorsport): “I feel that Mattias is a truly deserving DTM champion. He has earned the title on his own merits, by applying his driving skills. Of course he has also had the benefit of a team fully backing him, and a quick and reliable car – the Audi A4 DTM – as well as a drivers’ squad supporting him to the extent possible. For Audi this is a marvellous feat to have claimed the title right in the first year of their DTM comeback. The entire squad can be rightfully proud of this. The sporting spirit continuously displayed by Audi in motor racing is transferred to our production models as well.“