1-2 and driver´s title for Audi 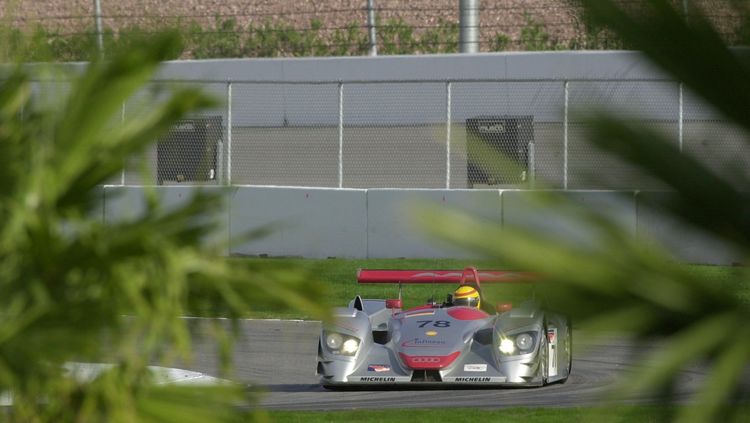 Audi clinched the driver´s title of the American Le Mans Series (ALMS) with a 1-2 at Las Vegas. Only his team mate Rinaldo Capello can catch championship leading Audi driver Allan McNish in the final round at Adelaide on December 31. The Audi Sport North America team had already won the manufacturer´s and team´s titles two weeks ago at Laguna Seca.

The Audi drivers, however, needed some lady luck to take home another victory. Frank Biela dropped to seventh place at the start and had to make up place by place. Allan McNish was touched by Jan Magnussen´s Panoz in the early stages of the race while fighting for the lead. The Scotsman spun, and the rear diffusor of his Audi R8 was damaged causing a strong oversteer.

McNish/Capello were still able to retake the lead, before five of the six leading prototype cars were involved in a spectacular collision with less than one hour to go. While Rinaldo Capello was pushed off into the grass by another car, Emanuele Pirro quickly chose the right line in the chaos and took the lead which he kept until the finish.

Rinaldo Capello brought his damaged car home in second position proving once more the robustness and reliability of the Audi R8. In none of the eleven ALMS races held so far the Audi Sport North America team had to register a technical failure.

Winning the driver´s title of the American Le Mans Series crowns an outstanding season: Audi celebrated a 1-2-3 victory at the 24 Hours of Le Mans, won the two endurance highlights at Sebring and Road Atlanta and eight races in the ALMS so far, the last seven of them in a row.

Frank Biela (#78): “Allan did not have a good start and mine was even worse, because I started on the outside. The others immediately passed me on the inside and I lost several places. After that the track was quite slippery. The balance of the car was not as good as we expected. But in the end we were still able to win. It is a great result.”

Emanuele Pirro (#78): “Obviously I am in seventh heaven. A win is very welcome even at this late stage of the season. We have been very good through the whole weekend. I felt very confident from the first moment. In the beginning the race looked very difficult, but in these kind of races the conditions change very quickly. When I got the car with the fresh tyres, I felt very confident that I could make it. Obviously the accident helped me a lot, but even without that I was very hopeful.”

Rinaldo Capello (#77): “It was a very tough race for me. I was in the middle of the collisions. I had more luck than most of the others, but the rear diffusor, which was already damaged, broke. I could not even go flat on the straights. But in the end I am happy with the result, because we clinched the driver´s title.”

Allan McNish (#77): “After the collision with Magnussen the car was not so good anymore. But this was a racing incident. Overall I am very happy that Audi has wrapped up the driver´s and manufacturer´s title. I am very pleased with the overall performance.”

Reinhold Joest, Team Director Audi Sport North America: “To sum up: It was a very turbulent and exciting race and we also had a slice of luck on our side. To win the manufacturers and the drivers championship was definitely not easy but all season long we showed a constant performance and that in my opinion was the key to the success. Before the season started we knew that we would have a chance of winning but that you only put into reality with hard work, attention and reliability. My compliment to the whole team. I also would like to thank Audi Sport and Audi Sport North America for the confidence they showed towards us. In all of my many motorsport years I definitely had a lot of success but I cannot remember achieving such a successful season: The 1-2-3 at Le Mans and now the titles of the American Le Mans Series, a wonderful year.“