Two Audi cars in the top 10 in difficult opening phase 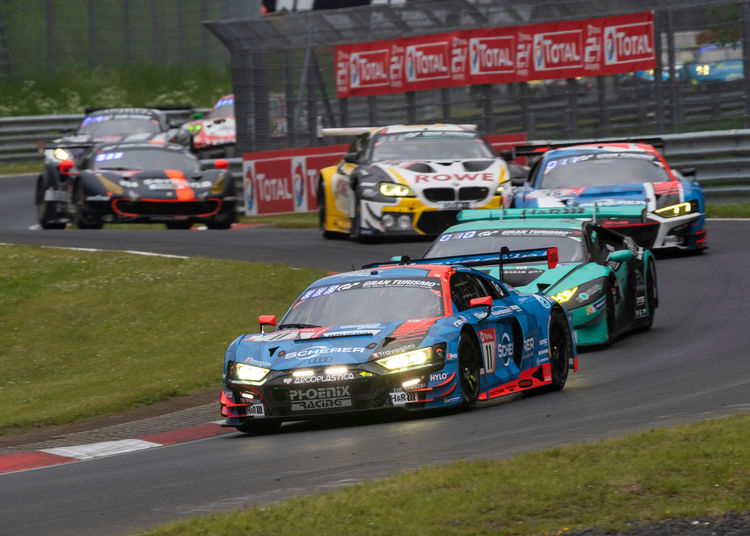 There was a threat of a change in the weather that had created suspense in the opening phase of the Nürburgring 24 Hours when the race had not even been green-flagged yet. Audi Sport Team Land had sent the number 29 R8 LMS on rain tires into the opening lap but initially it remained dry. After a short lap on the Grand Prix circuit, Christopher Mies therefore returned to the pits and had slicks fitted. He started the race from the pit lane only behind the first starting group. From 64th place, Mies was already back among the top 20 contenders within just four laps. He and his teammates Kelvin van der Linde, René Rast and Frédéric Vervisch improved to sixth place in the first four hours of racing. Heavy rain made for a turbulent race in this early phase. Phoenix Racing with the number 11 private Audi R8 LMS did best within the Audi Sport squad, with Michele Beretta, Kim-Luis Schramm, Frank Stippler and Nicki Thiim improving to fifth position. Audi Sport Team Car Collection, which like Team Land had to switch from rain tires to slicks at the beginning, worked its way back up to twelfth place. The number 5 privateer Phoenix Audi was in 21st place. The number 15 Audi from Audi Sport Team Phoenix is no longer part of the race after Dries Vanthoor slid off the track on slicks shortly before the end of the third hour. The impact with the track barrier damaged the car’s chassis, making the retirement unavoidable.