Skip to content
We are using cookies for a better user experience.
05/24/20
Neuburg a. d. Donau
Sports

Links
{{ activeItem() }}
Twitter
07/15/20
NEW on https://t.co/OQuS3VLVKJ: Historic race marathon for @ReneRastRacing, @RFrijns and @nico_mueller &gt;&gt;… https://t.co/UUcmESi2ee
07/13/20
Not long to go until the @DTM season finally gets underway. Catch up with @nico_mueller in his latest #DriversDiary… https://t.co/YQfM5DAOsL
07/13/20
MEDIACENTER: Successful on the Nordschleife &gt;&gt; https://t.co/VDDAd3nWB7 #PerformanceIsAnAttitude #GT3 https://t.co/8yNn8AwF9t
07/13/20
Well done to the Audi teams this past weekend: Second overall and class wins in NLS @vln_de, victories in TCR Russi… https://t.co/nyPZG37YD5
Audi Sport on Twitter
{{ activeItem() }}
Facebook
06/30/20
10 races with thrills, spills, banter and more: Looking back on the first season of the RCCO #RaceHome charity racing series with our DTM factory drivers competing for a good cause. #RaceHome #AudiTogether #etron #StayHome #PerformanceIsAnAttitude #RaceAtHome
06/29/20
From the virtual RCCO #RaceHome season finale, to picking up his new ride and racing at the Green Hell – a fun week for Nico Mueller in his latest #DriversDiary. >> audi.com/DTM >> audi.com/GT3 #RaceHome #AudiTogether #etron #StayHome #PerformanceIsAnAttitude #RaceAtHome -------------------- Audi RS 6 Avant: Combined fuel consumption in l/100 km: 11,7 (20.1) – 11,5 (20.5); combined CO2 emissions in g/km: 268 (431.3) – 263 (423.3); Information on fuel consumption and CO2 emissions as well as efficiency classes in ranges depending on the tires and alloy wheel rims used. // www.audi.com/dat
06/25/20
“That was the car I really loved to drive. I felt really confident in the new A4.” Together with Mattias Ekström, we’re looking back on the era of the Audi A4 DTM – the car that scored 5 DTM drivers’ titles for us. >> audi.com/DTM #PerformanceIsAnAttitude #AudiTogether
06/24/20
The first season of the RCCO #RaceHome charity racing series is in the books. Check out our race highlights and broadcast from WeatherTech Raceway Laguna Seca: >> bit.ly/2Vb03ww #RaceHome #AudiTogether #etron #StayHome #PerformanceIsAnAttitude #RaceAtHome
Audi Sport on Facebook 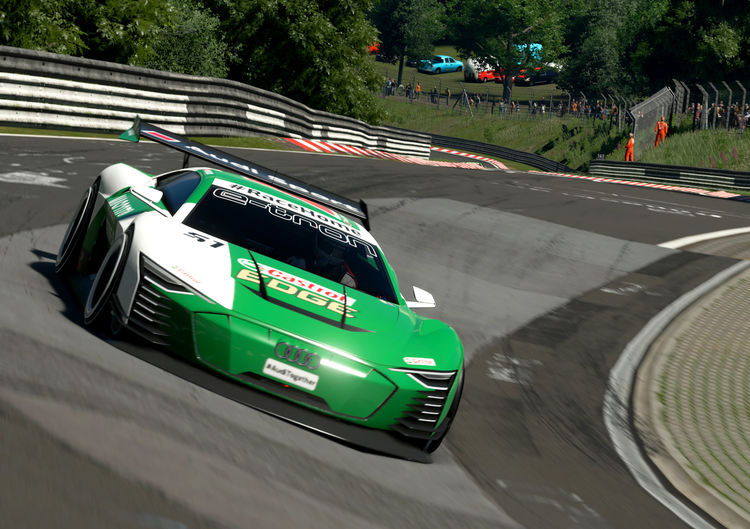 Already at the previous two rounds on the circuits in Barcelona and Bathurst, Nico Müller left his competitors in his wake in the all-important finals. The Swiss Audi DTM driver also celebrated his third victory of the season in a row by the end of the highlight event of the #RaceHome charity racing series on the Nürburgring-Nordschleife. The race format was adjusted, due to the length of the track covering over 25 kilometers through the notorious Green Hell: Instead of four qualifying races, only two were held to determine the drivers that proceeded to the semi-finals, after which, in addition to Müller, sim racer Patrick Jarczynski also qualified for the final. Jarczynski won the #RaceHome guest start with his design for the Audi e-tron Vision Gran Turismo and was also the favorite for victory against Müller. However, under great pressure from the Swiss driver, Jarczynski exceeded the limits of the electric sports car and went off track. In contrast, Müller made no mistakes and continued his winning streak. The seventh race of the virtual charity racing series will be held on Tuesday, May 26.

More photos from the #RaceHome events are available here.