Skip to content
We are using cookies for a better user experience.
01/27/19
Neuburg a. d. Donau
Sports

Second place for Audi at Daytona 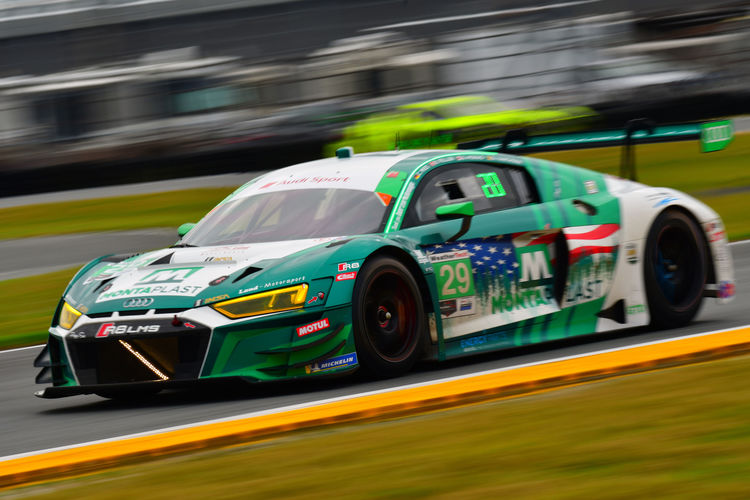 Audi Sport customer racing narrowly missed out on scoring the third win for the Audi R8 LMS at the season opening round of the IMSA WeatherTech SportsCar Championship in Daytona with the race car fielded by Montaplast by Land-Motorsport. Numerous incidents in the race resulted in 18 caution phases, with the race halted twice due to unusual rainy weather. During the 24-hour race, the customer squads Montaplast by Land-Motorsport, Starworks Motorsport and WRT Speedstar Audi Sport repeatedly took the lead of the 23-strong GTD class. After the best-placed Audi started from only 15th on the grid, the Audi teams performed impressively in the race. Following the second red-flag, the race director decided against resuming the race due to bad weather conditions. As a result, Montaplast by Land-Motorsport with drivers Ricardo Feller/Christopher Mies/Daniel Morad/Dries Vanthoor missed out on victory by a mere 5.226 seconds. In 2017, the German team came second at the classic in Florida – that time beaten by just 0.293 seconds. Securing fourth place in the GTD class, WRT Speedstar Audi Sport delivered a strong debut at Daytona in 2019. Roman de Angelis/Ian James/Kelvin van der Linde/Frédéric Vervisch finished just 27 seconds behind the winners after 561 laps.