{{ activeItem() }}
Twitter
05/16/21
Audi Sport driver @vanthoordries1 qualified third for the second ADAC @GTMasters race of the weekend at… https://t.co/uyfSTHN1Me
05/15/21
Podium at @MotorspArenaOC: Audi Sport driver @MiesChris and teammate Ricardo Feller finished third in today’s ADAC… https://t.co/fBO8WEE5DK
05/15/21
Ricardo Feller qualified third for the first ADAC @gtmasters race of the season at @MotorspArenaOC. He is sharing t… https://t.co/wUDOcK2mRc
05/14/21
MEDIAINFO: 23 race cars from Audi Sport on two ADAC racing platforms &gt;&gt; https://t.co/lkRiEyXwTy… https://t.co/0LhtaiMbYn
Audi Sport on Twitter
{{ activeItem() }}
Facebook
05/13/21
Looking back on the next chapter of our history at the ADAC TOTAL 24h-Rennen Nürburgring. Together with Christopher Haase - Fanpage, join us as we relive the race in 2014, which resulted in a faultless victory and a new race distance record. #PerformanceIsAnAttitude #24hNBR
05/10/21
Victories for the Audi R8 LMS in Europe and Australia were just some of the highlights for our customers worldwide during the most recent race weekend. Well done to all! 🇫🇷 🇦🇺 🇸🇰 🇩🇪 🇳🇴 🇳🇿 🇨🇳 🇧🇷 🇧🇪 🇮🇹 >> audi.com/GT3 >> audi.com/GT4 >> audi.com/TCR #PerformanceIsAnAttitude
05/08/21
From the back and into the points for Lucas Di Grassi in Monaco: Lucas moved forward from 17th to score a point in 10th, while René Rast’s kiss with the wall unfortunately ended his race. Up next: Puebla in Mexico from June 19–20. >> audi.com/FormulaE #FutureIsAnAttitude #MonacoEPrix
05/08/21
RACE DAY in Monaco, the first time that ABB Formula E is running on the full-length circuit. Don’t miss today’s Monaco E-Prix at 16:04 CEST. >> audi.com/FormulaE #FutureIsAnAttitude #MonacoEPrix
Audi Sport on Facebook 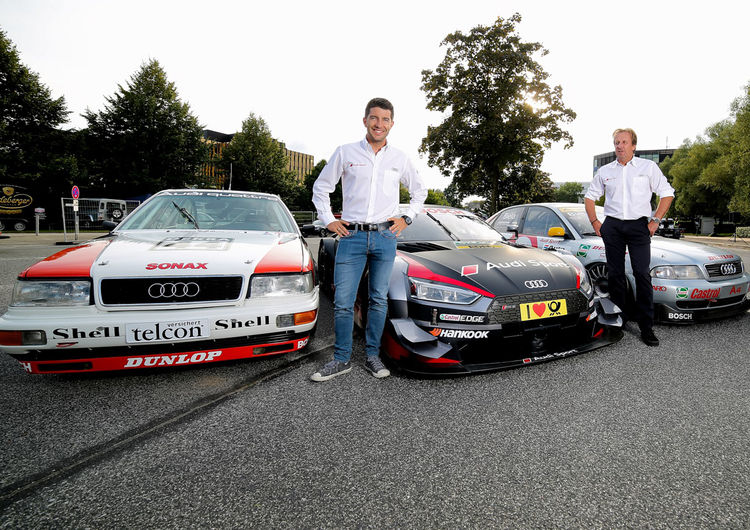 Mike Rockenfeller and the Audi RS 5 DTM were among the main acts of the 16th “Stadtpark Revival” that attracted around 30,000 car and motorcycle fans to Hamburg’s City Nord district. “It was great to see how the current DTM car caught the interest of the spectators although we were guests at a classic vehicle event,” said Mike Rockenfeller who also did some demo laps in the RS 5 DTM with an output of more than 500 hp. In addition, “Rocky” had the opportunity to pilot the Audi V8 quattro in which Hans-Joachim Stuck had won the DTM in 1990: “What an experience!” Frank Biela, the 1991 DTM Champion and five-time Le Mans winner was in action for Audi Tradition in Hamburg as well: He piloted the Audi A4 quattro in which he had won the 1996 British Touring Car Championship (BTCC).