Skip to content
We are using cookies for a better user experience.
10/13/17
Neuburg a. D. Donau/Hockenheim
Sports

Philip Ellis with the best attacking position in the title fight

{{ activeItem() }}
Twitter
07/01/20
35 days until the #ABBFormulaE season 6 restart in Berlin and we are testing at the @Lausitzring_de:… https://t.co/7z74QDNVtO
07/01/20
Congratulations on the signing of @Daniel_Abt for the @FIAFormulaE races in Berlin, @NIO333FormulaE. Daniel often p… https://t.co/dZ9eFAZt2n
06/30/20
Season highlights: @rccoracehome. 10 races with thrills, spills, banter and more together with our @DTM factory dri… https://t.co/DYsgJv0Vdd
06/29/20
The second @rccoracehome PlayStation 4 is up for grabs this week: Our 6 @DTM factory drivers signed 3 Limited Editi… https://t.co/aAN8GJsPZ2
Audi Sport on Twitter
{{ activeItem() }}
Facebook
06/30/20
10 races with thrills, spills, banter and more: Looking back on the first season of the RCCO #RaceHome charity racing series with our DTM factory drivers competing for a good cause. #RaceHome #AudiTogether #etron #StayHome #PerformanceIsAnAttitude #RaceAtHome
06/29/20
From the virtual RCCO #RaceHome season finale, to picking up his new ride and racing at the Green Hell – a fun week for Nico Mueller in his latest #DriversDiary. >> audi.com/DTM >> audi.com/GT3 #RaceHome #AudiTogether #etron #StayHome #PerformanceIsAnAttitude #RaceAtHome -------------------- Audi RS 6 Avant: Combined fuel consumption in l/100 km: 11,7 (20.1) – 11,5 (20.5); combined CO2 emissions in g/km: 268 (431.3) – 263 (423.3); Information on fuel consumption and CO2 emissions as well as efficiency classes in ranges depending on the tires and alloy wheel rims used. // www.audi.com/dat
06/25/20
“That was the car I really loved to drive. I felt really confident in the new A4.” Together with Mattias Ekström, we’re looking back on the era of the Audi A4 DTM – the car that scored 5 DTM drivers’ titles for us. >> audi.com/DTM #PerformanceIsAnAttitude #AudiTogether
06/24/20
The first season of the RCCO #RaceHome charity racing series is in the books. Check out our race highlights and broadcast from WeatherTech Raceway Laguna Seca: >> bit.ly/2Vb03ww #RaceHome #AudiTogether #etron #StayHome #PerformanceIsAnAttitude #RaceAtHome
Audi Sport on Facebook 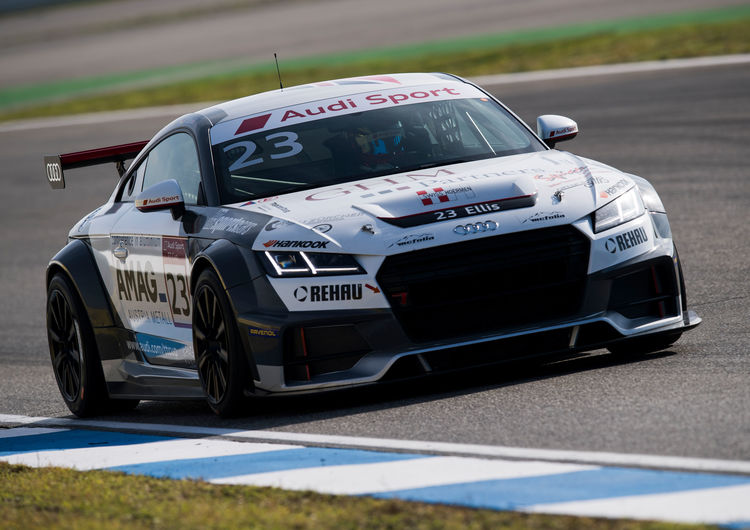 At the season finale, the Briton Philip Ellis clinched the best attacking position in the title fight of the Audi Sport TT Cup. With a time of 1m 50.452s, the table leader secured his third pole position of the season, and will share the front row with South African Keagan Masters in the first race on Saturday morning. Behind follows local hero Kevin Arnold. Mikel Azcona, currently second on the table and Ellis’s closest pursuer, had to settle for fourth on the grid. Should Ellis win, he will become the Cup winner prematurely on Saturday morning. Ellis also secured his fourth pole position of the year for the second race, sharing the front row with Mikel Azcona. The Swiss Yannik Brandt and Keagan Masters make up row two. “I’m thrilled that in both qualifying classifications the top ten drivers are all within four tenths of a second, which once again demonstrates the quality of the grid,” said Chris Reinke, Head of Audi Sport customer racing.