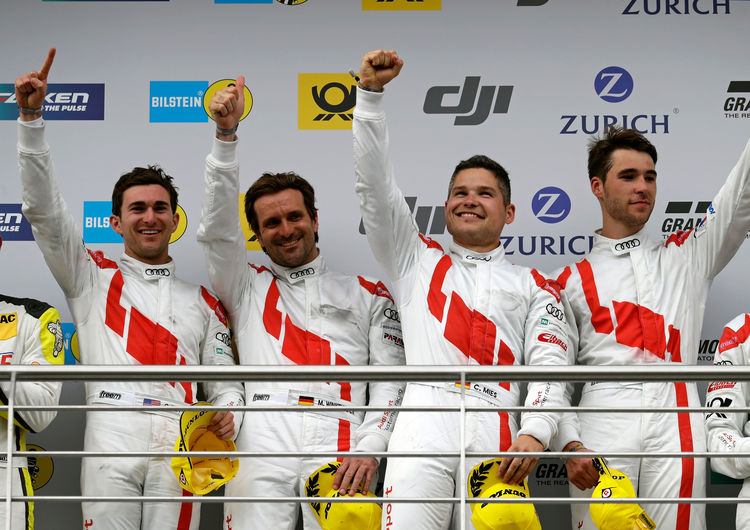 The Audi Sport customer racing quotes after the fourth win at the Nürburgring 24 Hours.

Connor De Phillippi (Audi R8 LMS #29): “I think that’s the craziest hours of motorsport I’ve ever seen in my life. From the lowest of lows to ending on top of the podium – the team just never gave up. We had a bit of luck come our way after our setbacks, but we didn’t just win because of luck – we led a very big portion of the race. We have to be proud of what we accomplished. Thank you to Audi sport Team Land, thank you to Audi Sport customer racing for making all of this happen.”

Kelvin van der Linde (Audi R8 LMS #29): “I’m really speechless. We led for a long time, without any mistakes. The team did everything perfectly. It all happened in the last two hours. When the first issue with the car occurred, I saw the faces in the box and I actually felt a bit heartbroken. But we pushed on and never gave up, and then it came good for us. For sure, we had a bit of luck, but that’s racing. This is a dream come true.”

Christopher Mies (Audi R8 LMS #29): “It’s really hard to describe. We led the race for 22 hours but we lost the lead after a technical issue. Yet we got the lead back in the last lap, which I never thought would happen. It’s a big surprise, but I think we really deserve this. My team and teammates did a fantastic job.”

Markus Winkelhock (Audi R8 LMS #29): “Awesome race, awesome weekend. For me the target was always to win the race because we knew we had the package. We have a good team, a reliable car, and a great driver line-up. We led the race for almost 22 hours. One and a half hours before the end of the race, we had an issue with a sensor. It was quite disappointing because we wanted to win so much. But when the rain came, it was like a movie. I couldn’t believe it. Actually, I still can’t believe it. It will take a while to sink in. To win this race three times is something quite special.”

Marcel Fässler (Audi R8 LMS #9): “We have seen again how tough it is to win this race. You can never be sure you’re going to win it until the checkered flag is waved. Even if it looks so good, like it did for us. The winners really deserved the victory. They led almost the whole race, they had amazing pace and made no mistakes. It would have meant a lot for me to win here for the first time.”

Robin Frijns (Audi R8 LMS #9): “By and large, it was a good race for all of us. We kept out of trouble, but we had some bad luck with yellow flags. Audi number 29 had an issue in the last hour so the race was in our hands, but due to our tire choice in the rain, the chance to win slipped away.”

Nico Müller (Audi R8 LMS #9): “At the moment, the disappointment is what I feel more than anything else. But what puts a smile on our faces is that at least it was an Audi that won the race. Audi Sport Team Land very much deserved it, they did a brilliant job throughout the whole race. Huge congratulations to them. But when you lose in the last lap of such a big race, when you’ve done almost a faultless job, it’s tough. It’s hard to accept at the moment but tomorrow we will be smiling again.”

René Rast (Audi R8 LMS #9): “Obviously, I’m disappointed. We were still leading the race about 10 minutes before the end. It was looking good. We had a one-and-a-half-minute gap to P2. But then it started raining and we took the wrong tire with the slicks. It started to rain more heavily, so we came in again and put wet tires on, but by that time the Audi Sport Team Land car already had wet tires on. Of course, it was a bit unfortunate for us.”