{{ activeItem() }}
Twitter
02/27/20
Utilizing the sun: @LucasdiGrassi visited the very impressive Noor Power Station near Ouarzazate, Morocco. The worl… https://t.co/bsfs63yoPZ
02/27/20
Welcome to Marrakesh. Continuing to get ready today. A slight change this week: Shakedown &amp; FP1 will take place tom… https://t.co/oLwoGCzSC6
02/26/20
BWT Mücke Motorsport returns to the ADAC @gtmasters in 2020 with two Audi R8 LMS entries: Audi R8 LMS #25: Mike B… https://t.co/33QnHvEGut
02/26/20
Click on the picture: All of the info that you need for this week’s @FIAFormulaE Marrakesh E-Prix at Circuit Intern… https://t.co/4RyvSddlQE
Audi Sport on Twitter
{{ activeItem() }}
Facebook
02/26/20
On track in Africa this week: the 2020 ABB Formula E Marrakesh E-Prix in Morocco on Saturday, February 29. >> audi.com/FormulaE #PerformanceIsAnAttitude #MarrakeshEPrix
02/24/20
He’s a busy man: from Mexico to Monza, Kempten and all the way back home to Switzerland (... even some gardening). Catch up with Nico Mueller in our latest #DriversDiary to find out what he has been up to this past week. >> audi.com/DTM #PerformanceIsAnAttitude #DTM
02/21/20
We’re always searching for technology to shape the future: Before the ABB Formula E Mexico City E-Prix, Daniel Abt and Lucas Di Grassi had a look at an exciting company developing artificial trees. >> audi.com/FormulaE #PerformanceIsAnAttitude #MexicoCityEPrix
02/17/20
Another week, another new episode of our #DriversDiary of Audi DTM factory driver Nico Mueller. Follow his week to find out what he was up to in Mexico City. >> audi.com/DTM #PerformanceIsAnAttitude #DTM
Audi Sport on Facebook 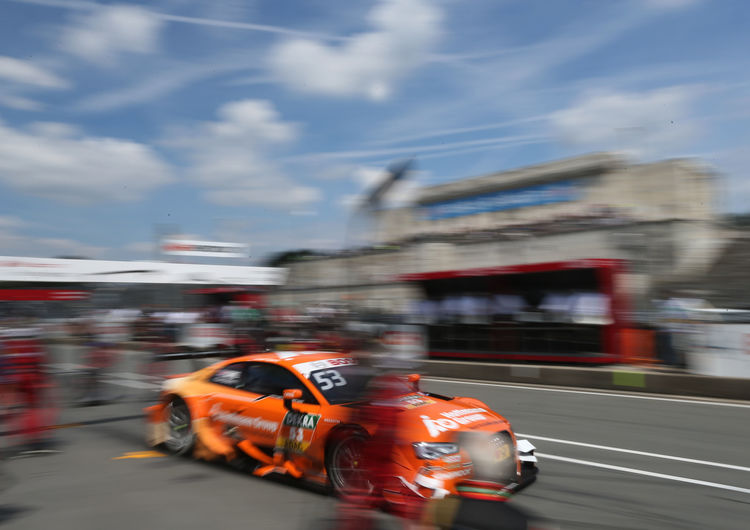 Jamie Green immediately justified his reputation of being a Norisring specialist in the first free practice session. The Briton in the Hoffmann Group Audi RS 5 DTM started the third DTM race weekend as the best Audi driver in fifth place, with only 45 thousands of a second short of the best time. Eleven thousandths behind Green, Adrien Tambay in the Playboy Audi RS 5 DTM followed in sixth place. As always on the merely 2.3-kilometer long Norisring, the field was close together, with only 44 hundredths of a second separating the 24 drivers. “It was a typical Friday,” said Jamie Green, summing up the day. “Things were going pretty well, but this was just the first free practice. It was positive that I drove my fastest lap at the end of a long run.”

On Saturday, at 10.15, another free practice session is scheduled before the qualifying session at 13.25 for the grid positions in the first of the two races at the Norisring (start on Saturday at 16.48).