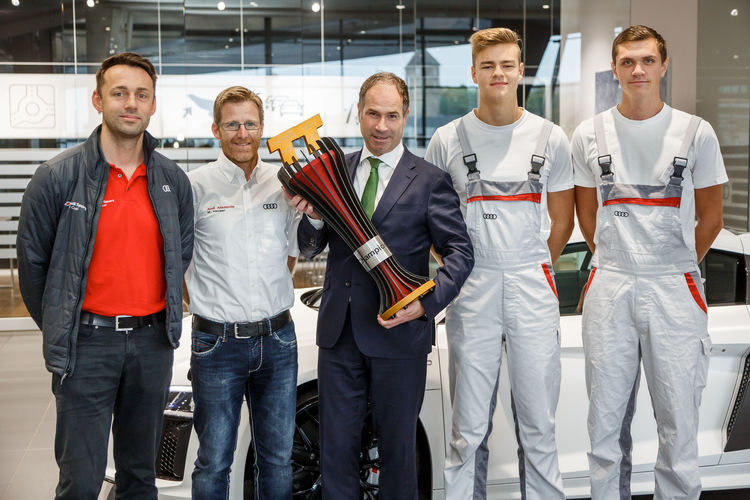 The motorsport men and women from the Audi Sport TT Cup greatly appreciate the creativity of Audi’s apprentices again this year. The fledgling employees at the Neckarsulm site have traditionally crafted the trophy for the Cup winner. This year marks a special occasion as, historically, it will be the last trophy of its kind because the Audi Sport TT Cup will not be continued after three years. The juniors designed the trophy on the computer before making a physical object from the CAD data. This year, the trophy is 75 centimeters tall, has a diameter of 20 centimeters and an impressive weight of 18 kilograms. The employees machined and milled the base body from aluminum while an intermediate piece is made of stainless steel. The base plate with the Audi and Audi Sport TT Cup logos is milled and the trophy is laser-engraved with an inscription as well. Combined, the two apprentices Johannes Spielhaupter and Rawil Schmidt, both in their third year of a toolmaker apprenticeship, have invested about two weeks of work. On Tuesday, they handed over the trophy in the presence of Wolfgang Schanz, Head of Production Audi Sport GmbH, and Michael Heuser, Apprenticeship and Advanced Training Manufacturing Process Technology. Philipp Mondelaers, Project Leader of the Audi Sport TT Cup, accepted the work of art before the grand finale of the Audi Sport TT Cup at Hockenheim at the Audi Forum Neckarsulm and will present it to this year’s Cup winner four days later. “It’s simply fantastic to see what the apprentices achieve year after year,” said Mondelaers. “For the Cup and especially for the winner, this unique trophy is a very special honor. We owe a great debt of gratitude to our dedicated young employees.”