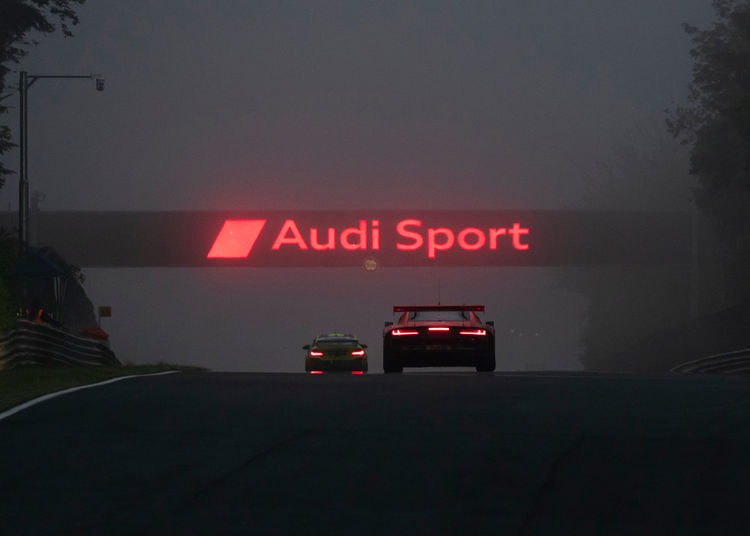 The 24-hour race at the Nürburgring was interrupted shortly after the start of the seventh hour of racing due to poor visibility. Banks of fog along nearly half of the combined track of the Grand Prix circuit and the Nordschleife made the chase through the "Green Hell" increasingly dangerous as the drivers had difficulty seeing yellow and Code 60 sections quickly enough. Until the red flag, two Audi R8 LMS cars continued to be among the race's top ten. The number 11 Phoenix Racing car with Nicki Thiim and then Kim-Luis Schramm at the wheel of the privately entered GT3 sports car managed to move up to third place. At the time the race was interrupted, the team held fourth position. The number 29 Audi R8 LMS driven by René Rast from Audi Sport Team Land Motorsport was in eighth place. Meanwhile, Christopher Haase in the number 2 Audi R8 LMS from Audi Sport Team Car Collection made up the most positions within the Audi Sport squad. The 33-year-old Audi Sport driver set sector best times during his double stint and improved from 23rd to 17th place. The race organizers have scheduled their next decision regarding the further course of the 24 Hours of Nürburgring for Sunday morning at 06:00. Weather conditions permitting, racing will resume at 07:00 at the earliest.