Skip to content
We are using cookies for a better user experience.
12/17/19
Neuburg a. d. Donau
Sports

Links
{{ activeItem() }}
Twitter
07/15/20
[1/3] Belgian Audi Club Team WRT Audi R8 LMS in 2020: @GTWorldChEu Endurance #31 @M_Bortolotti 🇮🇹, Rolf Ineichen🇨🇭… https://t.co/sYOwDkXylK
07/15/20
NEW on https://t.co/OQuS3VLVKJ: Historic race marathon for @ReneRastRacing, @RFrijns and @nico_mueller &gt;&gt;… https://t.co/UUcmESi2ee
07/13/20
Not long to go until the @DTM season finally gets underway. Catch up with @nico_mueller in his latest #DriversDiary… https://t.co/YQfM5DAOsL
07/13/20
MEDIACENTER: Successful on the Nordschleife &gt;&gt; https://t.co/VDDAd3nWB7 #PerformanceIsAnAttitude #GT3 https://t.co/8yNn8AwF9t
Audi Sport on Twitter
{{ activeItem() }}
Facebook
06/30/20
10 races with thrills, spills, banter and more: Looking back on the first season of the RCCO #RaceHome charity racing series with our DTM factory drivers competing for a good cause. #RaceHome #AudiTogether #etron #StayHome #PerformanceIsAnAttitude #RaceAtHome
06/29/20
From the virtual RCCO #RaceHome season finale, to picking up his new ride and racing at the Green Hell – a fun week for Nico Mueller in his latest #DriversDiary. >> audi.com/DTM >> audi.com/GT3 #RaceHome #AudiTogether #etron #StayHome #PerformanceIsAnAttitude #RaceAtHome -------------------- Audi RS 6 Avant: Combined fuel consumption in l/100 km: 11,7 (20.1) – 11,5 (20.5); combined CO2 emissions in g/km: 268 (431.3) – 263 (423.3); Information on fuel consumption and CO2 emissions as well as efficiency classes in ranges depending on the tires and alloy wheel rims used. // www.audi.com/dat
06/25/20
“That was the car I really loved to drive. I felt really confident in the new A4.” Together with Mattias Ekström, we’re looking back on the era of the Audi A4 DTM – the car that scored 5 DTM drivers’ titles for us. >> audi.com/DTM #PerformanceIsAnAttitude #AudiTogether
06/24/20
The first season of the RCCO #RaceHome charity racing series is in the books. Check out our race highlights and broadcast from WeatherTech Raceway Laguna Seca: >> bit.ly/2Vb03ww #RaceHome #AudiTogether #etron #StayHome #PerformanceIsAnAttitude #RaceAtHome
Audi Sport on Facebook 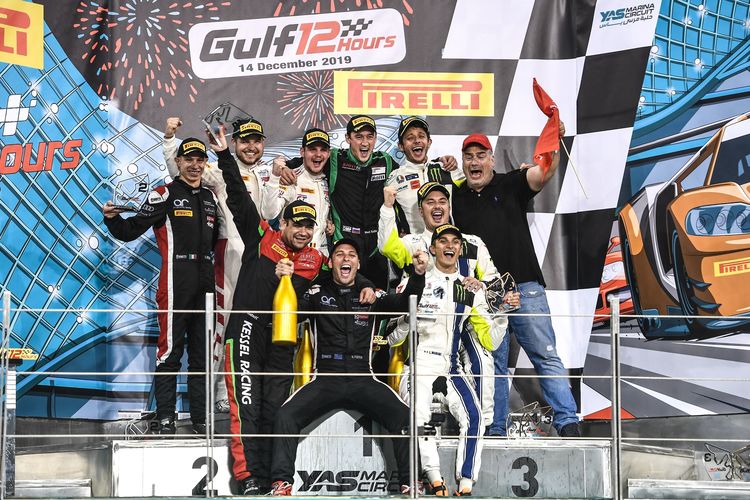 The Audi R8 LMS won the Gulf 12 Hours endurance race for the first time. The German customer team Attempto Racing celebrated a one-two victory in Abu Dhabi after an exciting race. Audi Sport drivers Christopher Mies and Dries Vanthoor won the race together with Rinat Salikhov, although they had to serve a stop-and-go penalty for an offence at the pit stop. The driver trio was lucky, because just at the moment of the penalty a safety car came onto the track, so that start number 66 returned to the race only twelve seconds behind its number 55 sister car. Mies/Salikhov/Vanthoor then battled with their fellow Audi Sport driver Mattia Drudi and his team mates Nick Foster and Murod Sultanov, who finally had to admit defeat by 93 seconds. At the finish, the victorious Audi set a new race distance record with 316 laps completed and 1,755 kilometres driven.