Links
{{ activeItem() }}
Facebook
12/06/22
Bivouac, liaison and what is a special stage? We’ve got you covered with our Dakar Rally Dictionary. >> audi.com/Dakar #FutureIsAnAttitude #RoadToDakar2023 #Dakar2023 #RSQe-tron
12/05/22
Well done to our customers: Yasser Shahin is the Pro-Am champion with the Audi R8 LMS in Australia – the seventh GT sprint title for Audi Down Under. Adding to his success is another endurance title for Audi at the Nürburgring, and a 24H Series title for Jasmin Preisig in the Audi RS 3 LMS. 🇦🇺 🇩🇪 🇺🇸 🇰🇼 𝗡𝗲𝘄𝘀𝗹𝗲𝘁𝘁𝗲𝗿 >> bit.ly/3VtvdMy #PerformanceIsAnAttitude
12/05/22
RACE WEEK in Abu Dhabi: 🇦🇪 Gulf 12 Hours – the 2022 Intercontinental GT Challenge season finale from December 9–11. 𝗣𝗿𝗲𝘀𝘀 𝗿𝗲𝗹𝗲𝗮𝘀𝗲 >> bit.ly/3U5rN19 #PerformanceIsAnAttitude #Gulf12H
12/03/22
The virtual world tour takes our new Audi RS Q e-tron* to the Ancient Egyptian Pyramids of Giza this week – at the foot of the Pyramid of Khafre. 𝗛𝗶𝗴𝗵-𝗿𝗲𝘀 𝗱𝗼𝘄𝗻𝗹𝗼𝗮𝗱 >> bit.ly/3iBDmjl #FutureIsAnAttitude #RoadToDakar2023 #RSQe-tron -------------------- *This vehicle shown here is the Rally Dakar vehicle that is not available as a production model.
Audi Sport on Facebook 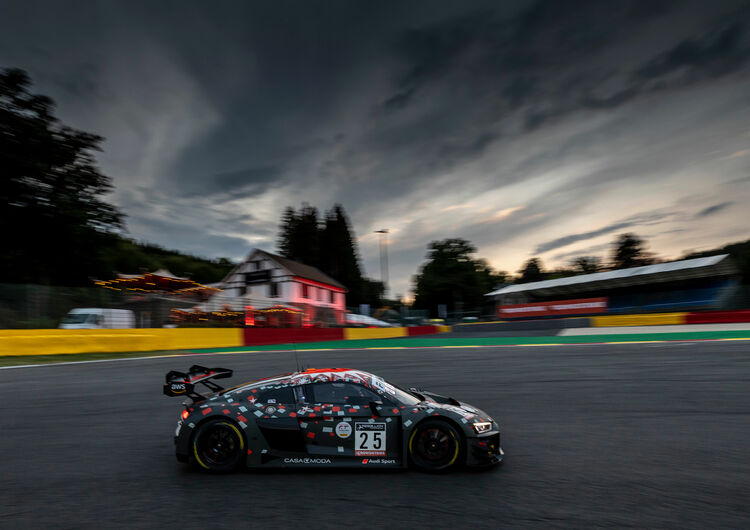 In the first third of the Spa 24 Hours, the spectators at the circuit witnessed thrilling fights for positions and many shifts in the standings. After eight hours, the top 20 are close together, including three teams from Audi Sport customer racing. Best Audi R8 LMS at the eight-hour mark is number 25 of Audi Sport Team Saintéloc with Patric Niederhauser at the wheel in 10th place. Number 30 of Team WRT lies in 16th place, followed by number 46 of Audi Sport Team WRT. The number 32 Audi Sport Team WRT dropped back in the evening due to a puncture and occupies 27th place.

Audi Sport Team Tresor suffered an undeserved setback early on in the Spa 24 Hours. Audi Sport drivers Christopher Haase and Mattia Drudi and their teammate Luca Ghiotto dropped to the rear of the field in the early stages due to a puncture. Later, contact with a competitor increased the gap again. That’s why the number 12 Audi R8 LMS has been withdrawn. Late in the evening, the Audi R8 LMS #11 from Team Tresor by Car Collection and also the #10 from Boutsen Racing had to end the race early after accidents.