Skip to content
We are using cookies for a better user experience.
05/05/20
Neuburg a. d. Donau
Sports

Links
Links
{{ activeItem() }}
Twitter
05/31/20
That was the season finale of the #DTMesports Classic Challenge on the @Nuerburgring Nordschleife. Thank you for fo… https://t.co/ACSJaQiQOY
05/31/20
Our reigning @DTM champion @ReneRastRacing is live right now. Join him on Twitch: &gt;&gt; https://t.co/ni87YOnzSk… https://t.co/msJFYH57Zv
05/31/20
Here we go for the @DTM eSports Classic Challenge season finale at the @Nuerburgring Nordschleife, from 14:00 CEST.… https://t.co/prgBtMIaU2
05/31/20
Race day for the #DTMesports Classic Challenge finale at the @Nuerburgring Nordschleife. The 1992 season for the fi… https://t.co/j91tAMxu5K
Audi Sport on Twitter
{{ activeItem() }}
Facebook
05/31/20
Season finale: The DTM eSports Classic Challenge is taking place on the Nürburgring Nordschleife today, including the 1992 and 2016 seasons with the Audi V8 quattro DTM and Audi RS 5 DTM. Live from 14:00 CEST. Live stream >> bit.ly/2XgZin5 #PerformanceIsAnAttitude #DTMesports #RaceAtHome #AudiTogether
05/27/20
Daniel Abt, after six years and 63 races, will no longer drive for Audi in Formula E. He has been part of our Formula E team since the debut of the racing series in September 2014, and our official factory driver since the autumn of 2017. In Mexico and at our home round in Berlin, Abt took two fantastic Formula E victories and scored a total of ten podium results. With Daniel, we celebrated great success and made enormous strides with Formula E. We are thankful for our time together and look back on it proudly. However, integrity, transparency and consistent compliance with applicable rules, especially with regards to the past, are top priorities for us at Audi. We stand by our culture of tolerating mistakes. However, the incidents that took place during the “Race at Home Challenge” sim racing series were not a mistake, but a conscious decision to go against the rules. That is what makes the big difference for us. Therefore, unfortunately, we had no other alternative than suspending Daniel Abt. >> audi.com/FormulaE #ABBFormulaE #SimRacing
05/26/20
It’s that time again: the #RaceHome charity racing series. Our DTM drivers are at Brands Hatch this week for more action with the Audi e-tron Vision Gran Turismo. #RaceHome #AudiTogether #etron #StayHome #PerformanceIsAnAttitude #RaceAtHome
05/25/20
Two victories in the virtual racing world of #RaceHome, the first taste of track action and some family time for Nico Mueller. That and more in his latest #DriversDiary. >> audi.com/DTM #RaceHome #AudiTogether #etron #StayHome #PerformanceIsAnAttitude #RaceAtHome
Audi Sport on Facebook 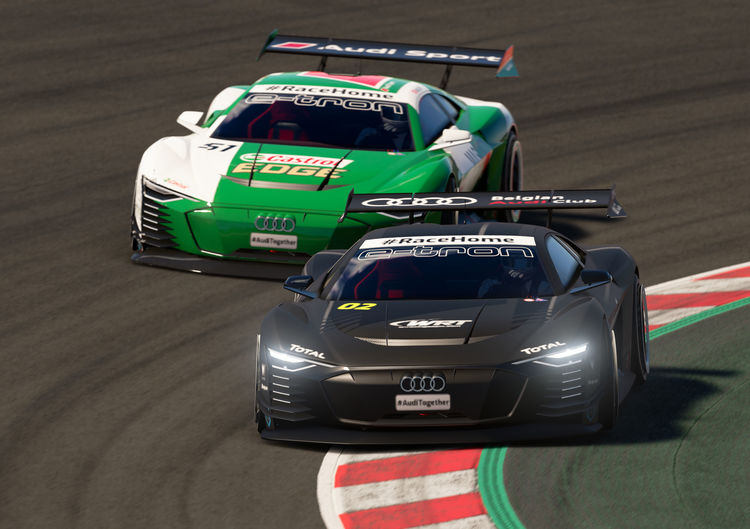 In the third round of the #RaceHome charity racing series, Dries Vanthoor, the latest guest driver, was the victor. The 22-year-old GT driver can already look back on numerous successes within the Audi Sport customer racing customer sport program. Now, the Belgian has also demonstrated his skills in virtual racing with the Audi e-tron Vision Gran Turismo and secured the first victory for the WRT Team Audi Sport squad. Vanthoor prevailed against a total of 14 competitors on the Barcelona Grand Prix race track. However, in the all-important showdown between Vanthoor and Audi DTM driver Nico Müller, it was impossible to predict who would win the third round – even in the final few meters before the finish. For spectators, the battle on track between the Belgian and the Swiss resulted in an enthralling final, which Vanthoor finally won with a very narrow lead of just five hundredths of a second. In addition to his first podium finish, Müller also achieved the overall fastest lap time and, together with his teammate Robin Frijns, took the lead in the teams’ classification for Audi Sport Team Abt Sportsline.

The winner of the next #RaceHome charity racing series round will be determined next Tuesday, May 12. More information at racehome.rcco.ag.