Daniel Abt to compete for Audi again next season

{{ activeItem() }}
Twitter
07/10/20
“All my life, I’ve dreamed about sitting in such a race car one day.” Mike Rockenfeller looking back on the 2012 Au… https://t.co/Hk47Riv1XG
07/10/20
Destination ADAC @gtmasters 2020. Our customers also joined us for testing at the @Lausitzring_de this week:… https://t.co/IdkSZCHzwf
07/10/20
More testing at the @Lausitzring_de: Audi Sport customer racing on track with the Audi R8 LMS this week, getting re… https://t.co/pNfnnWiFmF
07/10/20
Weekend mode: Heading home to Neuburg. Looking forward to the @DTM season kicking off at @circuitspa in three weeks… https://t.co/6iethFbgb8
Audi Sport on Twitter
{{ activeItem() }}
Facebook
06/30/20
10 races with thrills, spills, banter and more: Looking back on the first season of the RCCO #RaceHome charity racing series with our DTM factory drivers competing for a good cause. #RaceHome #AudiTogether #etron #StayHome #PerformanceIsAnAttitude #RaceAtHome
06/29/20
From the virtual RCCO #RaceHome season finale, to picking up his new ride and racing at the Green Hell – a fun week for Nico Mueller in his latest #DriversDiary. >> audi.com/DTM >> audi.com/GT3 #RaceHome #AudiTogether #etron #StayHome #PerformanceIsAnAttitude #RaceAtHome -------------------- Audi RS 6 Avant: Combined fuel consumption in l/100 km: 11,7 (20.1) – 11,5 (20.5); combined CO2 emissions in g/km: 268 (431.3) – 263 (423.3); Information on fuel consumption and CO2 emissions as well as efficiency classes in ranges depending on the tires and alloy wheel rims used. // www.audi.com/dat
06/25/20
“That was the car I really loved to drive. I felt really confident in the new A4.” Together with Mattias Ekström, we’re looking back on the era of the Audi A4 DTM – the car that scored 5 DTM drivers’ titles for us. >> audi.com/DTM #PerformanceIsAnAttitude #AudiTogether
06/24/20
The first season of the RCCO #RaceHome charity racing series is in the books. Check out our race highlights and broadcast from WeatherTech Raceway Laguna Seca: >> bit.ly/2Vb03ww #RaceHome #AudiTogether #etron #StayHome #PerformanceIsAnAttitude #RaceAtHome
Audi Sport on Facebook 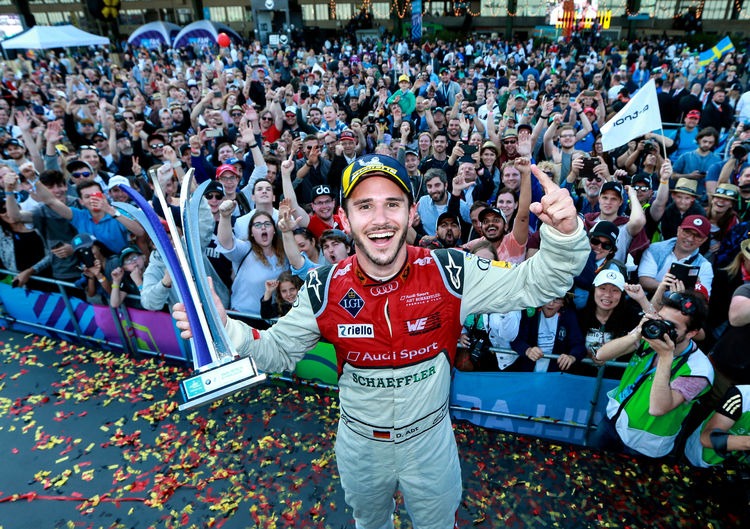 Daniel Abt will again be on the Formula E grid for Team Audi Sport ABT Schaeffler together with Lucas di Grassi next season. Dieter Gass, Head of Audi Motorsport, confirmed this before the E-Prix in Zurich.

“Daniel has been showing strong performances in succession this season and in my view has enormously developed further both on and off the race track,” says Dieter Gass. “Formula E with new cars and changed regulations is at the beginning of a new era. With our proven German-Brazilian duo we intend to attack again.”

Daniel Abt, who won the races in Mexico and most recently in Berlin this season, is ranked in fourth position of the championship and will start his fifth season in December. “For me, it continues to be an honor to represent the four rings in Formula E. I am delighted about the trust that Audi and the entire team places in me and am trying to give my allto reward this trust with good results.”

In addition, Nico Müller is on board as test and development driver. The Audi DTM driver is supporting the team in the simulator and in preparing the Audi e-tron FE05 for the new season.