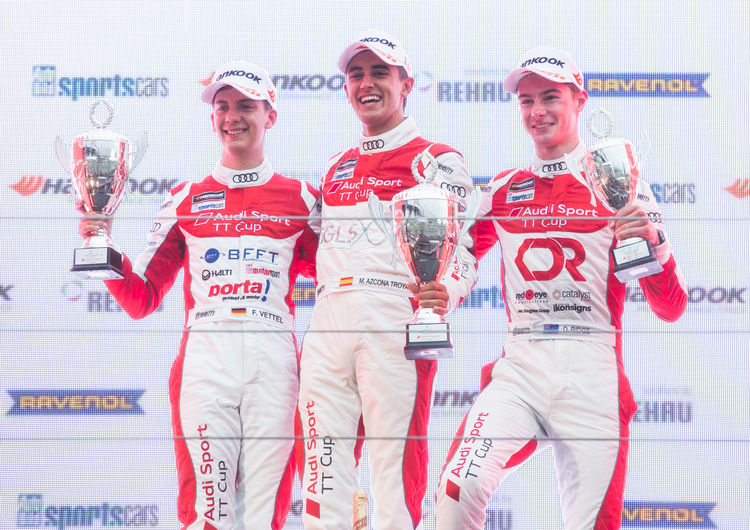 Mikel Azcona won the rainy first race of the fifth event of the Audi Sport TT Cup. The Spaniard celebrated his fourth victory of the season at the Nürburgring. His rival in the title fight, however, suffered a heavy setback: for the first time this year, Philip Ellis did not finish a race. After a duel with the Pole Gosia Rdest, the Briton had to retire his car due to a tire puncture. As a result, the title fight has now heated up substantially, with Azcona narrowing Ellis’s lead from 33 to eight points. Fabian Vettel and Drew Ridge stood on the podium for the first time. A podium result has been within reach of the German on previous occasions, but now with second place Vettel has lifted his first trophy. He delivered a lap-long duel with Tommaso Mosca, who ultimately finished fourth. The Australian Drew Ridge drove from tenth to third place and in doing so celebrated his best result of the season so far. Marco Melandri was the best guest driver with tenth place. The motorcycle racer occupied third during the opening phase of the race, but the Italian spun after an attack from another competitor on the seventh lap. YouTuber Felix von der Laden was the second-best guest driver in twelfth position under some difficult conditions, whilst Red Bull Air Race world champion Matthias Dolderer drove to 14th as the third guest driver.