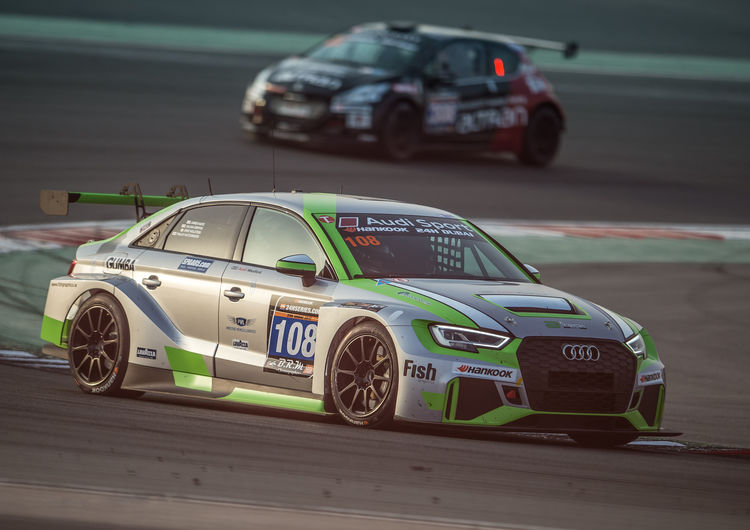 In its first race in the customer’s hand and on making its debut in a 24-hour race, the new Audi RS 3 LMS immediately celebrated a class victory. Only a month following delivery of the new TCR touring car, Cadspeed-Racing took the lead early in the 24-hour race in Dubai, defended the top spot and with James Kaye, Julian Griffin, Erik Holstein and Finlay Hutchison scored a clear victory in the TCR class.

Previously, James Kaye had competed in the supporting program of the TCR Middle East in the new Audi RS 3 LMS, had clocked kilometers as the leading contender in race two and in the end lost a podium place only due to a retroactive time penalty.

“This success marks the beginning of what will hopefully be a long and successful career of our new Audi RS 3 LMS,” says Chris Reinke, Head of Audi Sport customer racing. “Racing with a brand new vehicle in the inaugural event of the TCR Middle East and the 24 Hours of Dubai, and ultimately being able to celebrate class victory, is incredible. Cadspeed-Racing placed a lot of trust in us by fielding the Audi RS 3 LMS. This trust has been rewarded with class victory and demonstrates the strong development of the vehicle. This makes us proud and we’re looking forward to more.”

In 2017, Audi Sport customer racing is supporting two customer sports projects with the new Audi RS 3 LMS and the new Audi R8 LMS for the first time. Of the five customer teams that had competed in the 24 Hours of Dubai with last year’s winning Audi R8 LMS three ultimately finished in the top 10. Optimum Motorsport with Joe Osborne/Flick Haigh/Ryan Ratcliffe/Christopher Haase as the best team took fourth place. “This is a tremendous beginning of the year for us. Having three cars in the top ten, in a race with such a large field, is a great way to start the 2017 season,” says Reinke.