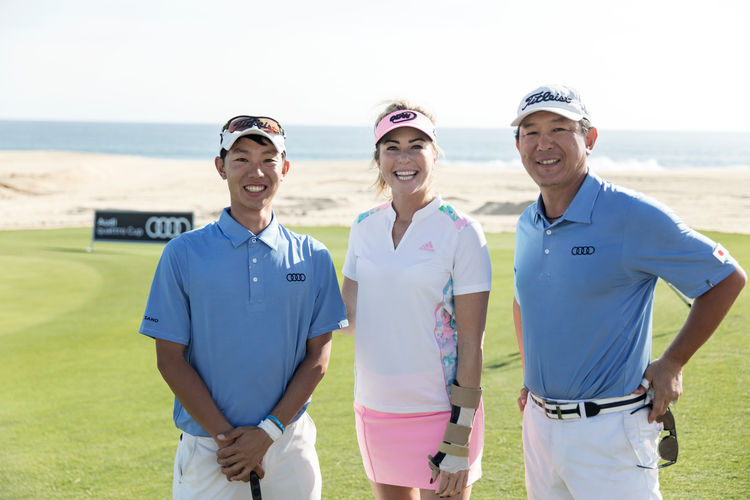 The winners of the 27th edition of the Audi quattro Cup are known: At the final of the world’s largest tournament for amateur golfers in Los Cabos, Mexico, Kinji and Yuji Sano from the Japanese team (Group A), as well as Karol Konárik and Tomáš Luciak from the Slovakian team (Group B), won their respective net scores. On the coastal course of the Quivira Golf Course on the Baja California Peninsula, the winners from the national Audi quattro Cup tournaments played two rounds of the Stableford format. A dramatic finish was seen in both groups: The duo from Japan prevailed after the final putt on the eighteenth hole against the mixed British team. In the second group, Group B, the teams from Slovakia and India were tied after two rounds. In the playoffs, it was Konárik who, with a Birdie putt, secured the win for the Slovakians. Two of the golfers demonstrated all of their skill by each scoring a hole-in-one on the thirteenth hole of the course: Esteban Guerreros from Paraguay and Michael Clarin from Sweden.

The sports equipment manufacturer TaylorMade, who has been a partner of the Audi quattro Cup since 2010, was once again present on site. The guests were entertained by the current World Golf Trick Shot Champion Geoff Swain and Kevin Carpenter. Piers Ward and Andy Proudman from “Me and My Golf” gave tips on how to properly handle iron and wood golf clubs. Well over one million amateur golfers have participated in the Audi quattro Cup since its founding in 1991.

More photos of the world final in Mexico can be found here.