Audi holds the lead after the first quarter of the race 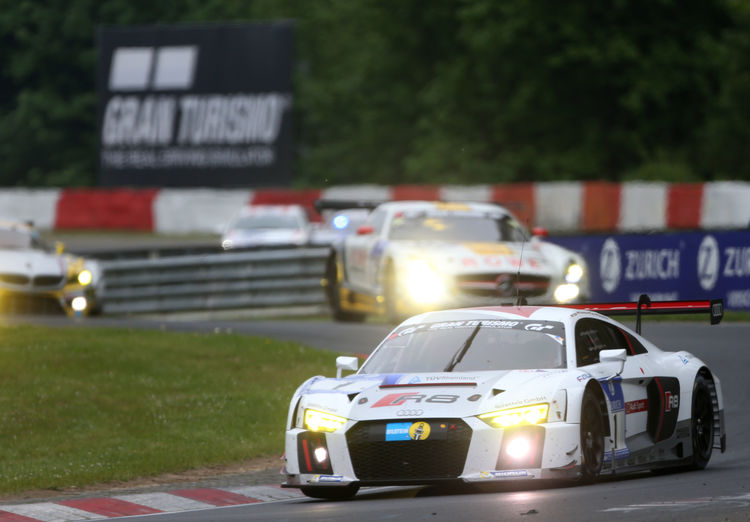 The all-new Audi R8 LMS was in the lead after the first six hours of its first 24 hour race at the Nürburgring. In changeable weather conditions including light rain for most of the time, Christopher Haase/Christian Mamerow/René Rast/Markus Winkelhock led the race at 10 p.m. in the no 1 Audi Sport Team Phoenix entry. A fierce battle for the lead had evolved between three brands in the top three positions. Christopher Mies/Nico Müller/Edward Sandström/Laurens Vanthoor from Audi Sport Team WRT emerged as the second best Audi in fourth position despite a brief fire during refuelling in the opening hour of the race. Marc Basseng/Marcel Fässler/Mike Rockenfeller/Frank Stippler in the sister Audi Sport Team Phoenix car held seventh position. The second Audi Sport Team WRT Audi driven by Christer Jöns/Pierre Kaffer/Nicki Thiim/Laurens Vanthoor lost 26 minutes owing to front end repairs after Pierre Kaffer hit the back of another competitor. After six hours, it was 32nd. Meanwhile, the fastest Audi R8 LMS ultra improved from 33rd on the grid to 22nd position, the number 15 being driven by the all-Asian line up of Audi race experience. Twin Busch Motorsport followed right behind in another R8 LMS ultra. Rod Salmon, in the second Audi race experience car, collided with an opponent in the sixth hour of the race. The team is currently changing suspension and body work parts.