Audi leading during the sprint to the finish 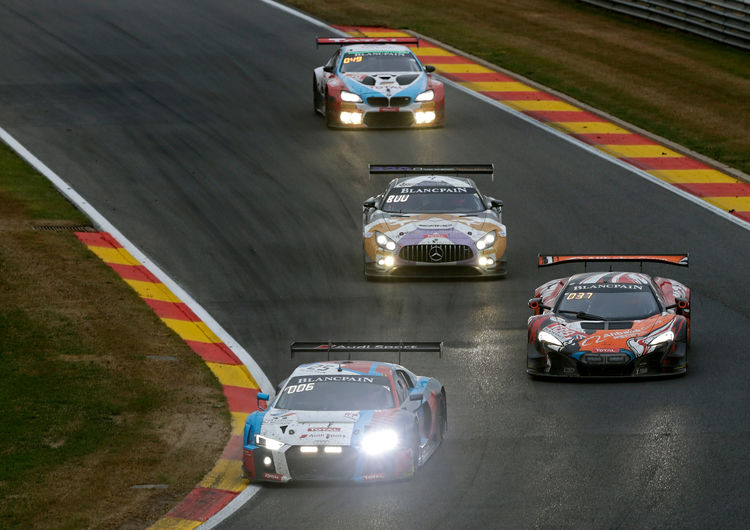 Four hours before the chequered flag falls, four Audi R8 LMS cars were running in the top ten of the Spa 24 Hours. Christopher Haase, Frédéric Vervisch and Markus Winkelhock, in the no. 25 Audi R8 LMS from Audi Sport Team Saintéloc, were leading and poised themselves well for the sprint to the finish. The winners of last year’s race, just as their brand colleagues in the no. 2 and no. 29 cars, led the field at various stages during the race’s 416 laps. Depending on the pit stop sequences and the full course yellow phases, the first five cars are all on the lead lap and within striking distance. This ensured that the pace of the cars remained very fast and at a constant level. The no. 29 entry from Montaplast by Land-Motorsport started the final four hours in fifth place. All of the Audi R8 LMS cars in the race ran trouble free and headed into the final sixth of the race. The comeback drive of Christopher Mies, Alex Riberas and Dries Vanthoor from Audi Sport Team WRT was particularly impressive. The crew of the no. 1 entry, which leads the Blancpain GT Series Endurance Cup standings, dropped to last place following a penalty and then proceeded to move forward into the top ten. They were in ninth position with four hours of the race to go, only two laps behind the overall leaders in the seventieth edition of the endurance classic. The sister no. 2 car of DTM drivers Robin Frijns, Nico Müller and René Rast were running one position ahead of their teammates in the no. 1 entry.