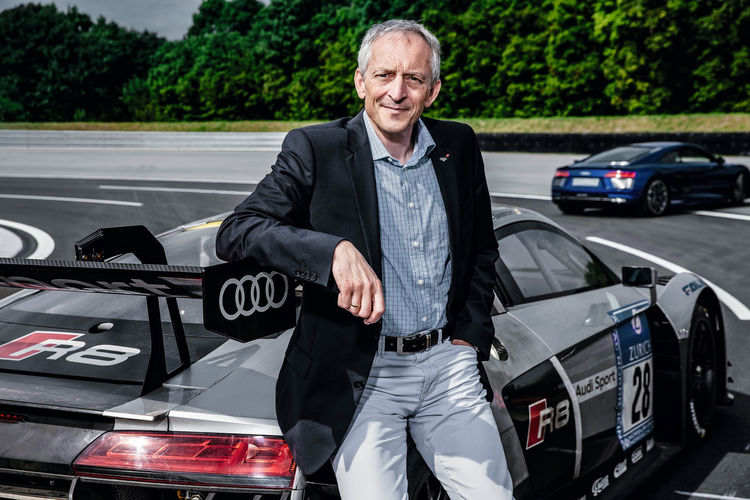 Sincere congratulations on the one-two-three result in the Sepang 12 Hours. You could hardly have wished for more than this.

This was indeed an end-of-season event that was made to measure. We met with five other marques in Malaysia, our squads from the Belgian Audi Club Team WRT and from Phoenix Racing fought a thrilling battle for victory and in the end Stéphane Ortelli, in his last race for us, clinched a well-deserved win with Stuart Leonard and Laurens Vanthoor. This meant a perfect ending of the first season for the new Audi R8 LMS.

Audi Sport customer racing experienced a challenging season. How would you sum it up?

It’s true that this year has been as intensive as hardly any others before it. We took the new Audi R8 LMS from its world premiere to its first endurance race victory within the space of eleven weeks and launched production in September as scheduled in order to serve our customers. In the first half of the year, we also mastered our move from Ingolstadt to Neuburg, while simultaneously taking care of all our customers who continued to compete with the Audi R8 LMS ultra. In winter, our workload will be continuing. By Christmas, we’re going to deliver 20 new Audi R8 LMS cars and another 30 by March.

The track record for the season is a positive one on the whole – this year, you had not just one but two good vehicles in your line-up that were in contention for victory.

Both, our well-known GT3 sports car and the new model, claimed victories and many other trophies. The new R8 LMS won the Nürburgring 24 Hours, the Sepang 12 Hours and a VLN race, plus podium positions in events such as the Spa 24 Hours, in Macau and in VLN races. In addition, our customers clinched numerous successes around the world with the well-known model for Audi. The drivers’ titles won by Robin Frijns in the Blancpain GT Series and by Christopher Mies in Australia were outstanding results. Added to these are eleven further titles in other categories – from successes in Gentlemen categories, to team titles, to other classification categories. And not to forget the ‘Coupe du Roi’ manufacturers’ title, which reflects the result of the good performances delivered by the old and the new car in the 24-hour race at Spa.

What challenges are you facing in 2016?

The season will be very demanding because we’re supporting our customers with their new cars around the globe. The endurance racing series will kick off in Dubai and the United States as early as in January and in Australia in February. At the same time, many new cars of our competitors will be making their debut. That makes the high demand for our model all the more gratifying. GT racing fans are witnessing an exciting era that, beyond the established series, is now featuring a global title as well – the Intercontinental GT Challenge. Audi has registered for participation and is set on battling for the title in four prestigious events in Australia, America, Belgium and Malaysia.