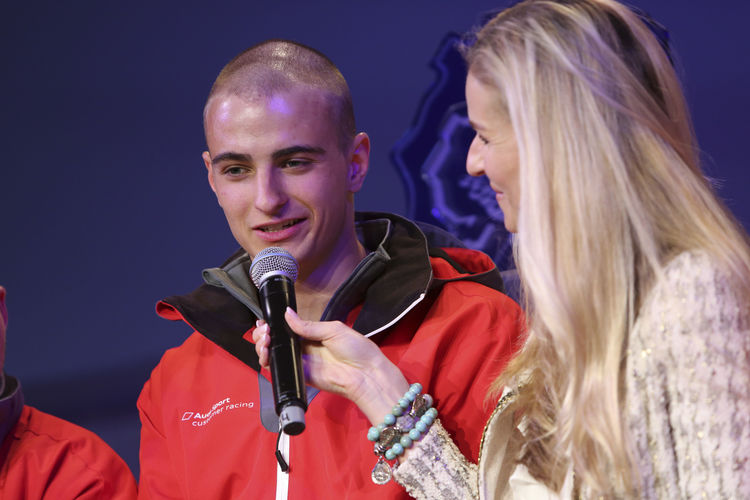 Audi driver Nico Müller about his hard earned victory with the new Audi R8 LMS in the 24-hour race at the Nürburgring and the forthcoming DTM weekend in the Lausitz.

Congratulations on winning the 24-hour race at the Nürburgring and for your new hairstyle. Who had the idea of shaving off your hair if you win?

My team-mate Christopher Mies came up with this mad idea. The strange thing is that he resisted the most in the end. But we all had to go through with it. And I can tell you one thing: I’m not really happy with the result on my head, but I am very pleased with our result on the race track.

After your VLN win in April, it was your second victory as an Audi factory driver and certainly a special one ...

Absolutely. The 24-hour race at the Nürburgring is one of the world’s most important motorsport events. To win here is a milestone. For Christopher, Edward (Sandström), Laurens (Vanthoor) and me to win with a new car to boot, makes our success even more valuable.

So, the win came rather unexpectedly?

I wouldn’t say that. After we won at the Nordschleife, the third race of the new Audi R8 LMS, we knew that we would start the race with a very fast, easily drivable and reliable car. The driver line-up was also very good, thus we targeted a podium finish right from the start.

When did you raise your expectations from a podium to winning?

You can never be really sure until the checkered falls in such an extremely challenging race. Too much can happen. However, after the first two hours, which went exceptionally well for us, we said we can do this. We took the lead for the first time during my double stint in the night ...

... and afterwards you staged an exciting battle with your pursuers.

It was really like a sprint race. Incredibly intensive. It was not just the cars behind that were of concern. The track was sometimes very slippery. Because of the rain, but more specifically because of the many ailing cars that spread oil and other fluids over the track. I had a scary moment in my second double stint in the morning when I spun on the slippery track. It was a perfect 360-degree pirouette without damage. It looked like Lady Luck was smiling on us.

DTM, WEC, VLN, 24-hour races – Audi drives from win to win. The atmosphere at Audi Sport could hardly be any better, don’t you think?

Obviously, we are all delighted about the success, which shows that many very good decisions were taken over the last few months. However, we also know that it is just a snapshot of time. Without doubt a very impressive one, but the tide can turn very quickly. I’m intrigued to see how the DTM race goes at the Lausitzring. We have to race with a lot of ballast after the two wins in the season opener at Hockenheim, BMW in contrast can remove ballast and Mercedes is historically very strong there. In addition, the Lausitzring is a very special race track, which unfortunately I don’t know as well as many of my rivals. We’ll see how things pan out there. Whatever happens, I’m looking forward to getting back into my Audi RS 5 DTM.