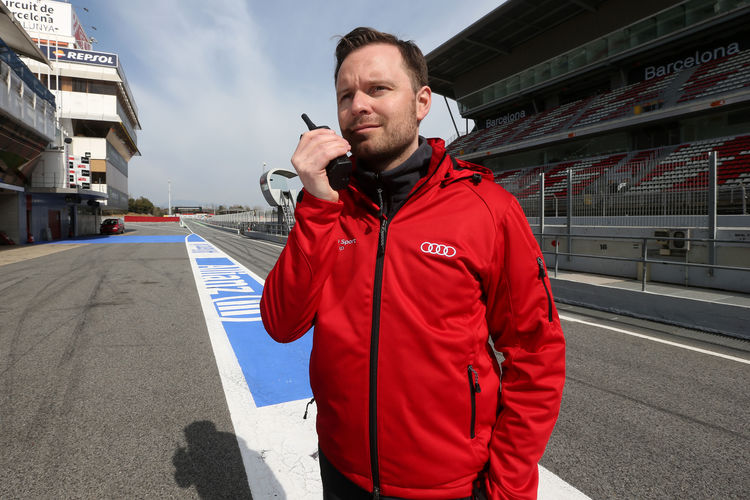 Rolf Michl (D)
You’re looking back on an eventful week. First, the fitness camp of the 18 international talents of the Audi Sport TT Cup was on the agenda. As the project leader of the new Audi one-make cup, how did you experience the five days in the Allgäu?
In beautiful surroundings, it was fascinating to see how quickly the 18 young women and men from 13 nations became a team. With that, we achieved our first aim for the fitness camp. At the same time, it was important for us to show each single entrant their personal fitness level and to create optimum prerequisites for the first test at Barcelona in the process.

From the Allgäu, the 18 entrants immediately traveled via Munich on to Spain for the track tests. What’s your assessment?
For me and for everybody in the team it was an impressive experience when the engines of the Audi TT cup cars were started on Saturday morning and the entrants went out on track for the first time. I’m truly impressed by the performance of the car and our young drivers did an outstanding job too. The instructors, Markus Winkelhock and Marco Werner, expressly praised how quickly the 18 entrants familiarized themselves with the TT cup and how meticulously they worked out their individual set-ups. Based on the data analysis, we’re now entering the crucial weeks before the start of the season.

There are 55 days left until the inaugural race of the Audi Sport TT Cup. What’s still on your agenda before the season opens at the Hockenheimring?
We’re going to process the findings we gained from the test together with our colleagues from technical development. At the same time, we’re preparing for the second test of the season to be held in April. That’s when the drivers, in addition to covering more test kilometers, are going to practice specific things such as the starting procedure. And then of course we’re incredibly looking forward to the season opener on the big motorsport weekend at the Hockenheimring: the Audi Sport TT Cup together with the DTM, the World Rallycross Championship, Formula 3 and the Porsche Carrera Cup. The first weekend in May is going to pack a punch.
Facebook
Twitter
LinkedIn
WhatsApp
Back to top