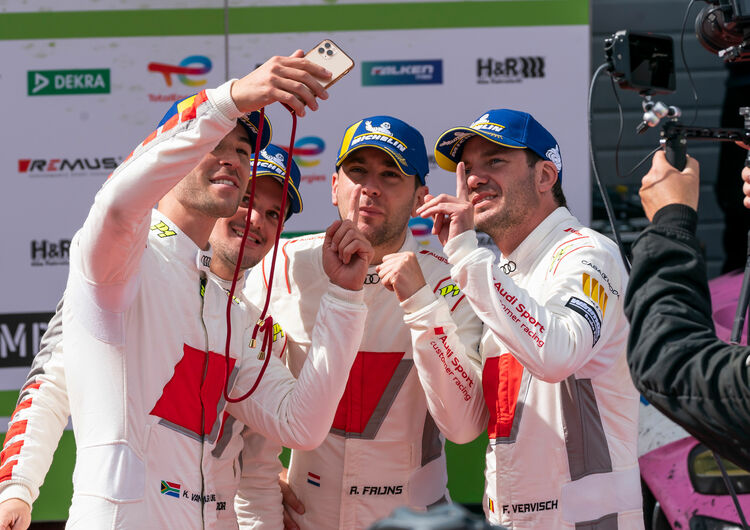 Robin Frijns (Audi R8 LMS #15, Audi Sport Team Phoenix): “I was a bit scared at the pit wall. In 2017, I was in the other car and we lost the race in the last lap. Everything came back again and I was afraid to lose the victory again during the last lap when we were basically leading three quarters of the race. Basically, we survived. So I’m very pleased that I finally got this race win ticked off my box.”

Kelvin van der Linde (Audi R8 LMS #15, Audi Sport Team Phoenix): “It is a very special feeling to come here and win at the Nürburgring. Everything here is just special, because there’s some talented drivers that try their entire career and don’t even win it once. I’m so happy that Dries, Frédéric and I got our second win now and also for Robin to take it off his bucket list. I am really proud, especially of the team, because they did an amazing job on the strategy side of things and the tire choices. I think really we deserved it this weekend.”

Dries Vanthoor (Audi R8 LMS #15, Audi Sport Team Phoenix): “I have mixed emotions due to what happened earlier in the race when my brother and I collided. It is never nice to look in the mirror and see your brother having a big crash. I think I would do it differently in the future. Apart from that, the race went very well. Everybody did a good job. We had a small issue in the last pitstop, but our gap was big enough to bring it home. I am happy to have won the race twice now.”

Frédéric Vervisch (Audi R8 LMS #15, Audi Sport Team Phoenix): “We started from quite far behind. I tried to avoid incidents and not to be too aggressive. But there were a lot of aggressive drivers around and a lot of stupid accidents, which would have been avoidable. For that reason, we changed our strategy and we under cutted the rest. And that gave us some free air to run in. We could drive at our pace and took the lead. We tried to manage it and we also took some risks. This was not a nice situation, because you can also easily go off. I am extremely happy that my team did so well. The conditions were quite difficult so I am happy that we brought it home.”