Links
{{ activeItem() }}
Twitter
01/18/20
Another thrilling #SantiagoEPrix. What a comeback from @LucasdiGrassi: 7th from 22nd on the grid. A strong performa… https://t.co/1vIP9jHFyV
01/18/20
We are just minutes away from going green in Santiago. There is still time to vote for our two drivers! #FANBOOST… https://t.co/cxZL9Q2KGl
01/18/20
#SantiagoEPrix at 20:04 CET. You can still vote for #FANBOOST up to 15 min into the race! Watch &gt;&gt;… https://t.co/fgcMS4dOrP
01/18/20
Our final grid positions for the 2020 @FIAFormulaE Santiago E-Prix. Start time: 20:04 CET. #FANBOOST &gt;&gt;… https://t.co/9TmCKxfANZ
Audi Sport on Twitter
{{ activeItem() }}
Facebook
01/17/20
“It’s like the Matrix!” Daniel Abt and Lucas Di Grassi are hunting for treasure in the world of VR before the ABB Formula E Santiago E-Prix. Check it out. >> audi.com/FormulaE #PerformanceIsAnAttitude #SantiagoEPrix
01/15/20
Full speed to the first ABB Formula E race of 2020: the Santiago E-Prix on Saturday, February 18. >> audi.com/FormulaE #PerformanceIsAnAttitude #SantiagoEPrix
01/14/20
Don‘t miss out as Formula E goes full throttle this season. #PerformanceIsAnAttitude
01/13/20
Kicking off 2020 for Audi Sport customer racing with podiums in Dubai: TCR class victory for the Audi RS 3 LMS and two overall podiums for the Audi R8 LMS. Well done to our customers in the rain-shortened Dubai 24 Hours. >> audi.com/GT3 >> audi.com/TCR #PerformanceIsAnAttitude
Audi Sport on Facebook 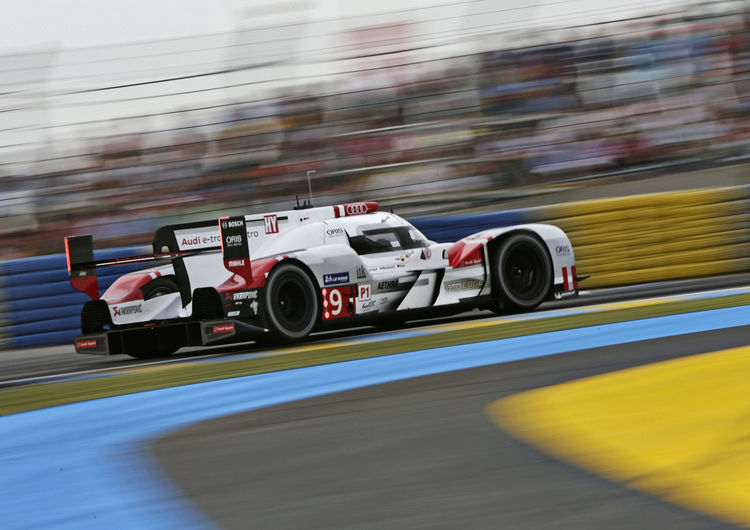 Audi R18 e-tron quattro #9 with LMP1 newcomer René Rast at the wheel continues to run in second place after 17 hours. The gap between Rast and the leading Porsche #19 of Nico Hülkenberg remained constant at a little over two minutes. A refueling stop during a safety car phase meant the deficit grew to one lap.

Audi R18 e-tron quattro #7 was two laps down in fourth place at 8 o’clock. Marcel Fässler resumed the race in fifth place at 7:02 after a 6 minute 56 second long repair to the rear end, before making up a position when Oliver Jarvis stopped to refuel in the R18 #8.