Skip to content
We are using cookies for a better user experience.
08/25/19
Neuburg a. d. Donau
Sport 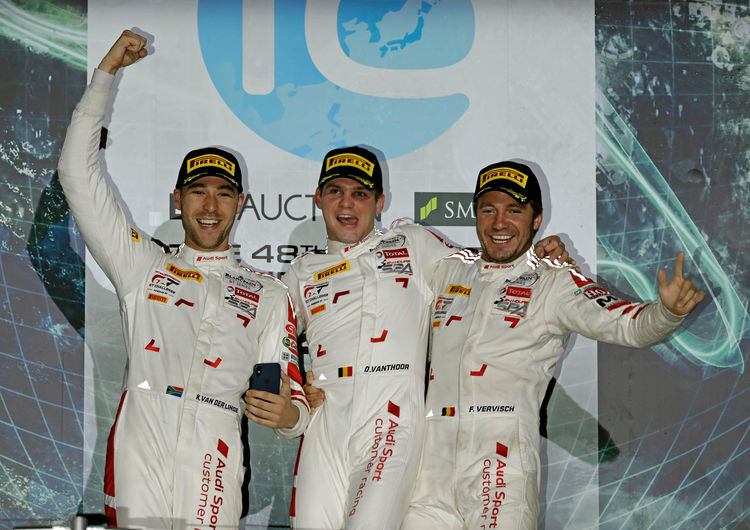 Quotes from Audi Sport customer racing after the first victory in the 10 Hours of Suzuka.

Kelvin van der Linde (Audi R8 LMS #25): “The podium at Suzuka a year ago was already great, but victory now is awesome. For me, this is the first big endurance racing victory this year. In the 10 Hours of Suzuka, making good use of the opportunities was crucial. Definitely not all of the teams managed to do that as the many mistakes, accidents and penalties showed. ‘Thank you’ to Audi Sport that gave us a fantastic car. The evolution of the Audi R8 LMS was a big help this year because it’s even better to drive on this track than the previous model. This helped us especially across the long run.”

Dries Vanthoor (Audi R8 LMS #25): “My 2019 endurance racing season is going superbly: victory in the 24 Hours of Nürburgring in June has now been followed by the next success with the Audi R8 LMS in Japan. I’m especially happy that I’ve clinched this result with Audi Sport Team WRT. This is the squad I also won the Bathurst 12 Hour in the Intercontinental GT Challenge with a year ago. Plus, in Kelvin and Frédéric I had two strong team-mates through whom this success has been made possible in the first place.”

Frédéric Vervisch (Audi R8 LMS #25): “After the successes in the two 24-hour races in Dubai and at the Nürburgring, first place at Suzuka was my third endurance racing victory with Audi this year. I’m proud of the performance of Audi Sport Team WRT, which has made this victory possible for us. All three drivers gave their best. Avoiding mistakes was especially important as the example of many participants showed that were handed a whole slew of penalties. An important key to success was the Audi R8 LMS. It’s a powerful car with which we were able to control the race well. Many thanks for it to Audi Sport.”