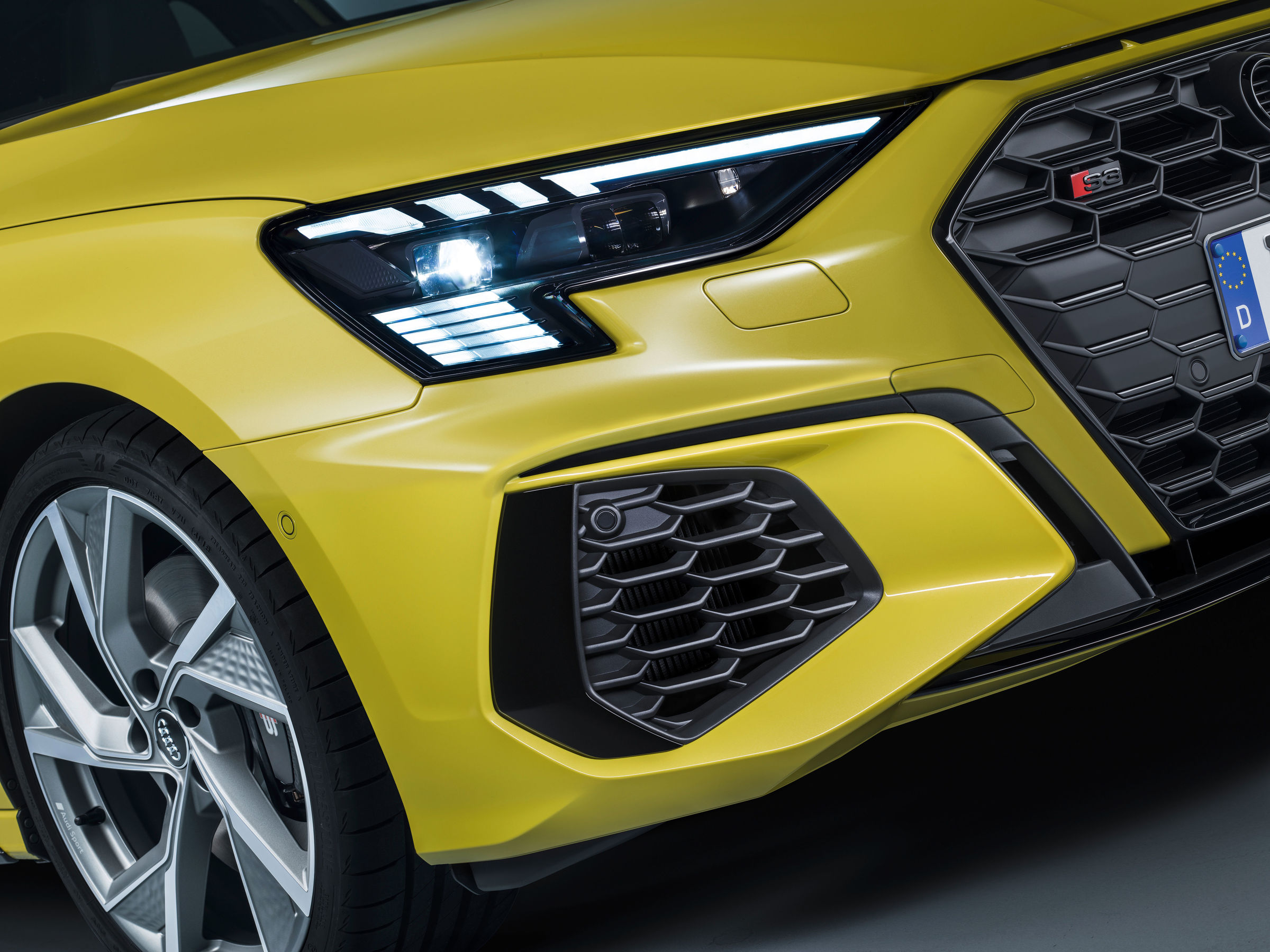 The new A3 standard model has a taut and masculine design. With its low greenhouse, the body is the visualization of taut power. The heavily inclined C-pillars of the Sportback appear to give the entire vehicle a forward thrust, while the Sedanboasts a flowing coupé style. The surface below the shoulder of the body, which extends in a smooth line from the headlights to the rear lights, is curved inward – a new element of Audi’s design that clearly accentuates the wheel arches. At the Sportback a long roof edge spoiler provides shade for the rear window. This makes it appear particularly low, thus accentuating the width of the car. The Sedan has a tailgate spoiler.

Striking details reinforce the design of the new S3 models even further. The wide, low‑positioned Singleframe has a matt black grille with a large rhombus design and small aluminum-look inlays. There are three flat slits between the grille and the engine hood – reminiscent of the legendary Audi Sport quattro from 1984. The pronounced three-dimensional air inlets and the bumpers are bordered by frames with a stainless steel look. The same look adorns the strips at the side sills, while the housings of the exterior mirrors have a gleaming galvanized aluminum finish that is characteristic of the S models**. The four exhaust tailpipes and the large, heavily contoured diffuser are similarly distinctive. The stainless steel look also accentuates the rear end.

Audi offers eight paint colors, including Python Yellow and Turbo Blue for the first time. The optional black styling package includes the frame of the Singleframe, the air inlets of the blades, the inserts in the side sill, and the frame of the diffuser.

The housings of the exterior mirrors are also available in black. For an even sportier style, large carbon-look spoilers are available for both the Sportback and the Sedan.

The new S3 comes with flat, wedge-like LED headlights and LED rear lights including dynamic turn signal light as standard. Optionally they can be equipped with matrix LED headlights. Here the outside corners, which are drawn downward, are home to another new feature: the digital daytime running lights. They consist of a pixel array made up of 3 x 5 LED segments, ten of which form two vertical lines. In addition, the matrix LED headlights offer an intelligently controlled high beam light, a dynamic turn signal light at the front and the rear as well as many other functions, including animations when the car is locked and unlocked.