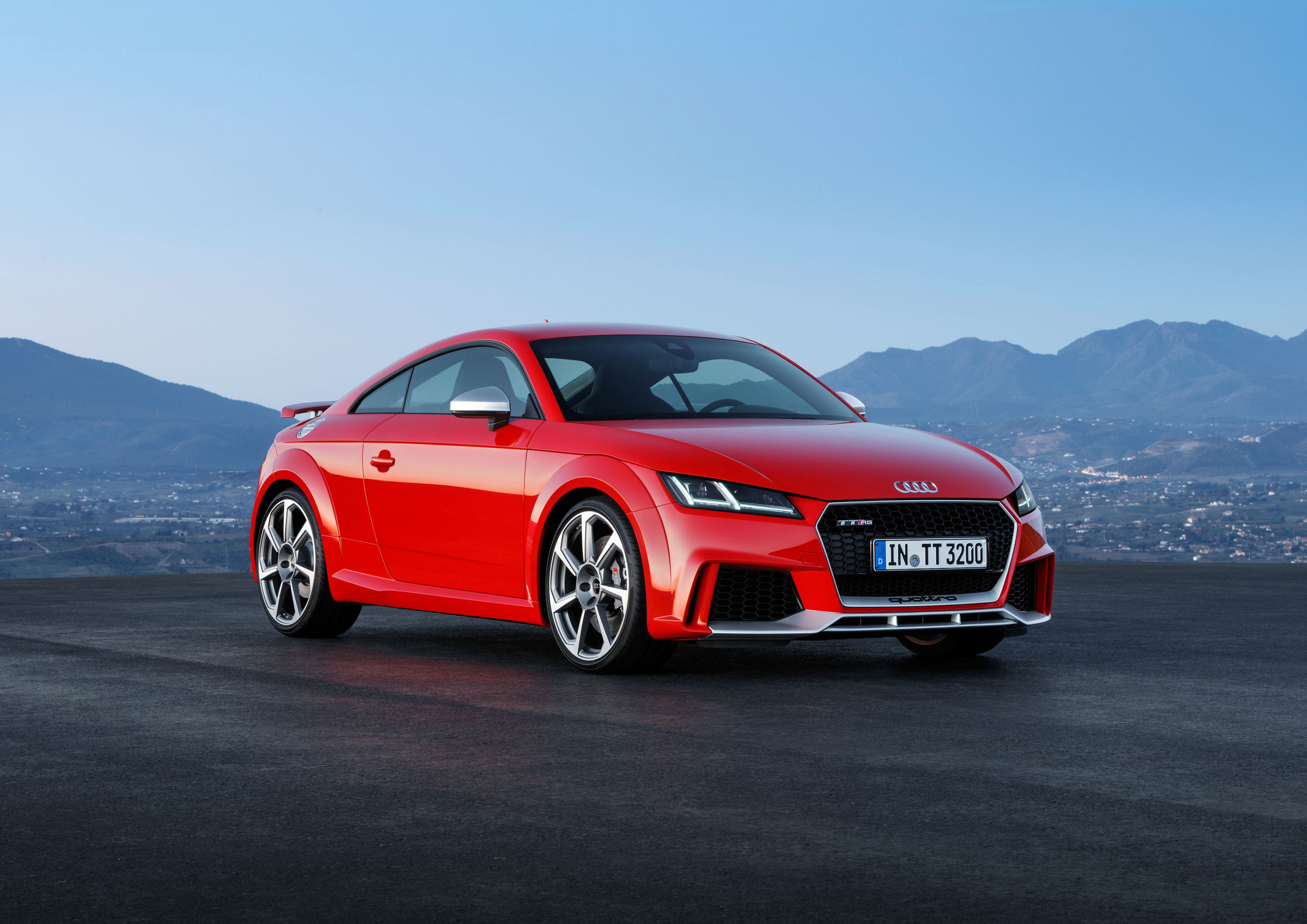 The new TT RS Coupé and the new TT RS Roadster also display their inner strengths on the outside. Three figures summarize the proportions: 4.19 m (13.7 ft) long, 1.83 m (6 ft) wide, but only 1.34 m (4.4 ft) high. The Audi designers have kept the timeless, puristic lines of the original TT and at the same time have reinterpreted numerous elements.

The sporty vanguard has been honed significantly compared with the TTS. The three-dimensional Singleframe bears a quattro logo at the bottom and is made even more impressive by its honeycomb grille. The air inlets, behind which additional water coolers sit, share the same look. Bold profiles surround them; angled bars divide them. A blade finishes the middle air inlet towards the bottom. LED headlights are standard; Matrix LED units that control the high-beam lights intelligently and with a high level of flexibility are optionally available.

At the rear, the fixed RS wing sitting on two thin double struts is a real eye-catcher. This is part of the aerodynamic concept that promotes performance and efficiency. Audi can deliver the Coupé and the Roadster with an automatically extending spoiler upon request. Under the striking bumper, the TT RS flaunts a strongly profiled diffuser insert with four vertical fins, leading to the two elliptical tailpipes of the RS exhaust system at its sides. Along the flanks, the new TT RS models have aerodynamically shaped side sills. The result: a low cd value of 0.32 for the Coupé and 0.33 for the Roadster.

For the first time in a series-production Audi: Matrix OLED rear lights
The TT RS is equipped with LED rear lights as standard. Upon request, Audi presents an innovation: Matrix OLED rear lights (organic light-emitting diode) in a 3D design. Their planar light is extremely homogeneous and precise. It does not cast any harsh shadows and does not require any reflectors or light guides. This makes the OLED units efficient and lightweight.

In each rear light there are four wafer-thin lighting elements that become smaller from inside to outside. The biggest one bears a TT logo and the four Audi rings. The light show when turning on the ignition is spectacular: The light runs in a fast loop over all four units. Lastly, an arrow-shaped, visually homogeneous LED light guide lights up, which complements the OLED rear light. The dynamic turn signals, which run in the direction the driver intends to turn, are located at the lower edge of the rear lights. Reflectors, reversing lights and rear fog lights are positioned in the upper zone.

Wide variety: paint finishes and appearance packages
Audi delivers both models in nine colors, including the RS-specific tones of Nardo gray and Catalunya red, metallic. In addition, numerous customized paint finishes are available through the Audi exclusive program. The optional matt aluminum and gloss black styling packages set accents on the Singleframe, on the blade, on the RS rear wing and on the diffuser insert.