Skip to content
Please participate in our survey and help us improve the Audi MediaCenter. Thank you!
Go to survey
Back
09/09/16
Models 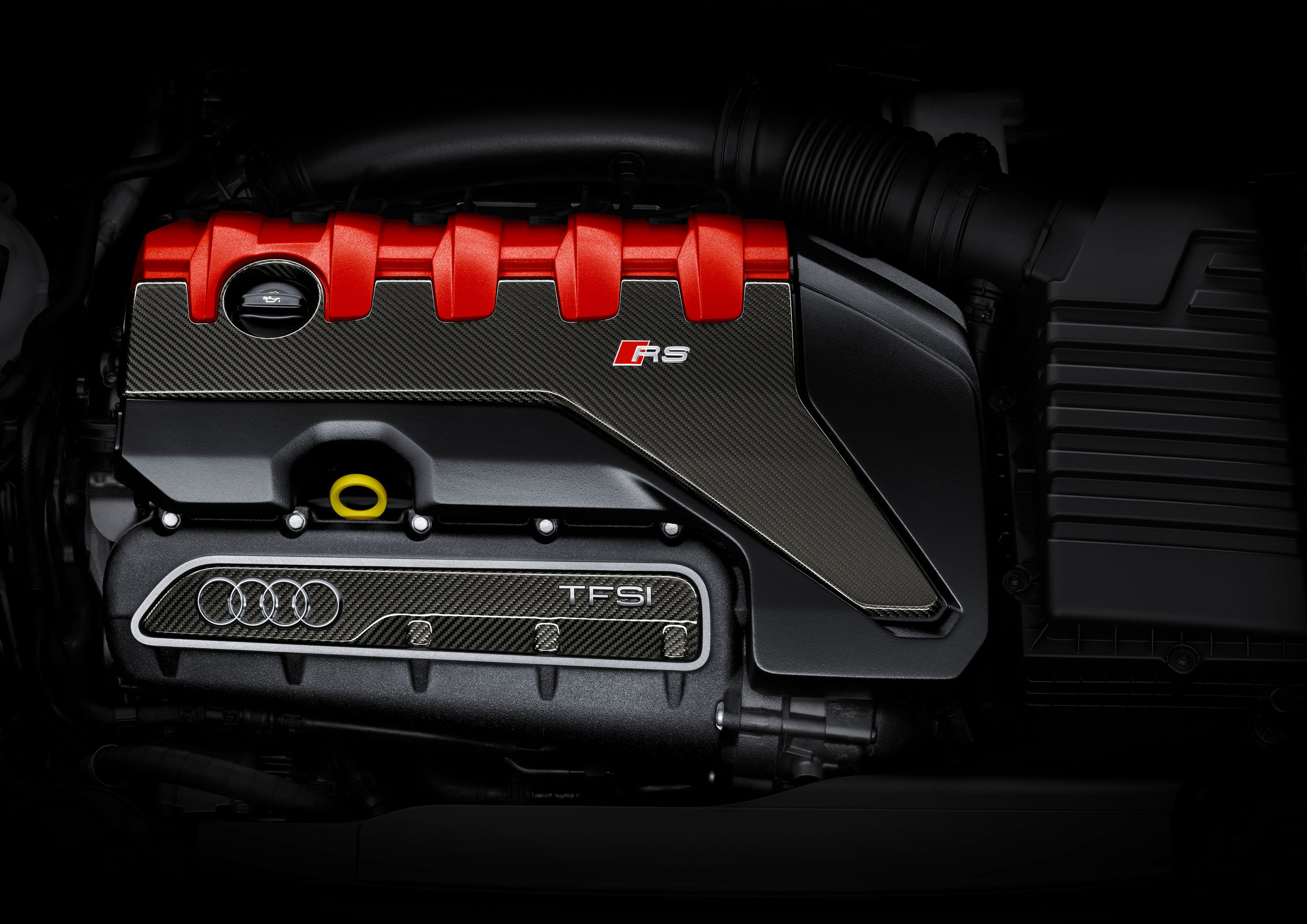 “Audi enjoyed racing success in the 1980s with the combination of a five-cylinder engine and quattro drive,” said Stephan Winkelmann, CEO of quattro GmbH. “In the new TT RS, we are transferring this potent technology package to the present. Today this means: 400 hp, best traction under any road conditions and thus tremendous driving pleasure, yet reduced fuel consumption.”

Engine
The five-cylinder engine is a modern classic. A jury of international motor journalists has voted the 2.5 TFSI “Engine of the Year” seven times in a row. Now Audi has upped the ante with a completely newly developed turbo engine in the TT RS.

At less than 50 centimeters (19.7 in) in length, the 2.5 TFSI engine is extremely compact and is 26 kg (57.3 lb) lighter than the previous model. Its crankcase is made of aluminum, which alone saves 18 kg (39.7 lb). The overall weight of the new TT RS and its axle load distribution benefit significantly from this. Elaborate measures reduce internal friction while at the same time increasing power output. The cylinder barrels are plasma-coated; the crankshaft main bearings are six millimeters (0.2 in) smaller in diameter. The crankshaft is hollow bored and is therefore 1 kg (2.2 lb) lighter; the aluminum pistons integrate channels for the oil cooling. In the short warm-up phase after a cold start, the switchable water pump does not circulate the coolant in the cylinder head – the 2.5 TFSI engine reaches its operating temperature more quickly. This lowers the coefficient of friction and reduces fuel consumption.

The gas exchange of the five-cylinder engine is designed for high throughput. The large turbocharger forces the intake air into the combustion chambers at up to 1.35 bar. The intercooler with its efficiency level of

80 percent reduces the temperature for the highest possible oxygen percentage. Intake and exhaust camshafts can be adjusted as required. On the exhaust side, the Audi valvelift system (AVS) changes the duration of valve opening depending on the throttle and engine speed at two levels – for moderate fuel consumption at low and partial load as well as more spontaneous throttle response and high pulling power at full load. For better mixture preparation, the new 2.5 TFSI engine works with a dual injection system. It provides the option of injecting fuel into the intake manifold as well as directly into the combustion chamber. The duration and type of injection can be variably optimized for each engine operating point.

Inimitable five-cylinder: the sound
The 2.5 TFSI has a firing interval of 144 degrees. Because of the 1-2-4-5-3 ignition sequence, ignition alternates between adjacent cylinders and those far apart from one another. This delivers a very special rhythm and character. The uneven number of cylinders results in harmonic frequencies that accompany the basic tone. The engine control unit also contributes to the unmistakable sound. At higher throttle, the flaps in the exhaust system open for an even fuller sound. The driver can influence control of the exhaust flaps for both the standard RS exhaust system and the optional RS sport exhaust system with black tailpipe trims by pressing the sound button on the center console.

Optimized: higher output, lower consumption
Despite 60 hp more output, the Audi TT RS consumes 0.3 liters less fuel in the NEDC than its predecessor. This is attributable to not just engine-side optimizations, but also to a start-stop system and a recuperation system. The Coupé uses just 8.2 liters per 100 kilometers (28.7 US mpg) – this corresponds to CO2 emissions of 187 g/km (300.9 g/mi). The Roadster consumes on average 8.3 liters (28.3 US mpg) and emits 189 g/km