As if it is jinxed in some way: Jamie Green has won 16 DTM races in his career to date. Most recently, he had good chances of clinching the DTM title three times in succession, but on every occasion, something got in the way shortly before the end of the season.

In the DTM, Green was a title candidate in each of the past three years up until shortly before the end of the season, but in the end had to settle for the runner-up’s spot in 2015 and third position in 2016 and 2017. “Finishing in the top three in three successive seasons is a strong achievement and a good sign,” says the Briton who competes in car number 53, a number that his father used to race with as well. “We always had the chance to become champion.”

In 2017, he came particularly close. Green seemed to be well on his way to finally make his big dream come true. On the Red Bull Ring at Spielberg, on the penultimate race weekend of the season, he was headed for a sure victory when, shortly before the end of the race, he was suddenly no longer able to shift and, as a result, dropped to third place in the overall standings trailing his teammate, René Rast, and Mattias Ekström. Although he won one of the final races at Hockenheim, he had to settle for third position in the end and watch his new teammate, René Rast, crown himself DTM Champion right in his first year. “Obviously, that was tough for me, but René did a great job and I was very happy for Team Rosberg. Their title win was more than overdue. I hope that my time will come too, the DTM title has been and continues to be my big aim.”

Jamie Green lived in Monte Carlo on the Côte d’Azur with his wife, Ginny, and their three children for many years. During the winter and summer vacations, the five Greens would regularly return to England. In the course of time, they considered moving back to England, a plan the family has since turned into reality. “In Leicester, we now enjoy our big garden which, unfortunately, we didn’t have in Monaco.” For Green, this marked the beginning of a new stage in his life as, particularly in winter, life in the United Kingdom is different than it is on the Côte d’Azur where, above all, he enjoyed cycling tours with fellow race drivers like Paul Di Resta, Lucas di Grassi, Alex Wurz or David Coulthard. “Cycling is still my favorite cardio training,” says Green. “Plus, I go to the gym twice a week. When I’m traveling I go jogging.”

The Audi campaigner also stays fit in karting. His oldest son is now eight and a year ago received a Bambini kart. Jamie Green used this opportunity to buy a racing kart for himself too and is now regularly practicing with Zachary. Green is convinced that he benefits from his hobby in the DTM as well. “Karting is perfect practice for me. The tracks are small and my kart is very fast. It’s a great physical and mental challenge because everything happens extremely fast. That sharpens your fitness and senses.”

In motorsport, Green has now expanded his activities as well. After having fully concentrated on the DTM for many years, he contested initial events in the Audi R8 LMS in GT racing. In addition, he pursued obtaining a license for the legendary Nordschleife with the aim of contesting the 24-hour race at the Nürburgring one day.

Green started his motorsport career in events held in the area of his native Leicester. Initial attempts in stock car racing were followed by a classic karting and single-seater career. Finally, the title in the 2004 Formula 3 Euro Series was the springboard into the DTM in which he made a name for himself with four victories on the Norisring and other successes. Since 2013, he has been competing for Audi and in the DTM squad is not only valued for his speed but also for his grasp of technology. That is why Jamie Green was always included in the development tests of the Audi RS 5 DTM in recent years, so to some extent he can be credited with the title win by his teammate, René Rast, as well.

For his everyday driving needs, the Briton is sold on the Audi Q7 and the Audi RS 6 Avant. “When you have three children, the Audi Q7 is simply the best choice and the RS 6 is a fantastic car,” he says.

That the DTM in 2018 races in Brands Hatch again for the first time in five years, makes Jamie Green particularly happy: “I’ve never won a DTM race at home. It would be great to change that this year!” 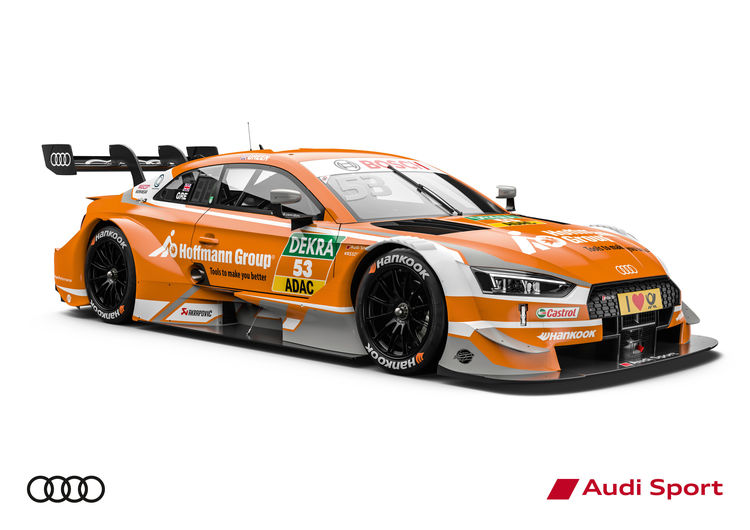