Since entering Formula E in 2014, Audi Sport ABT Schaeffler has been an integral part of the electric racing series and after six years is one of the most successful protagonists of the series. A journey through time. 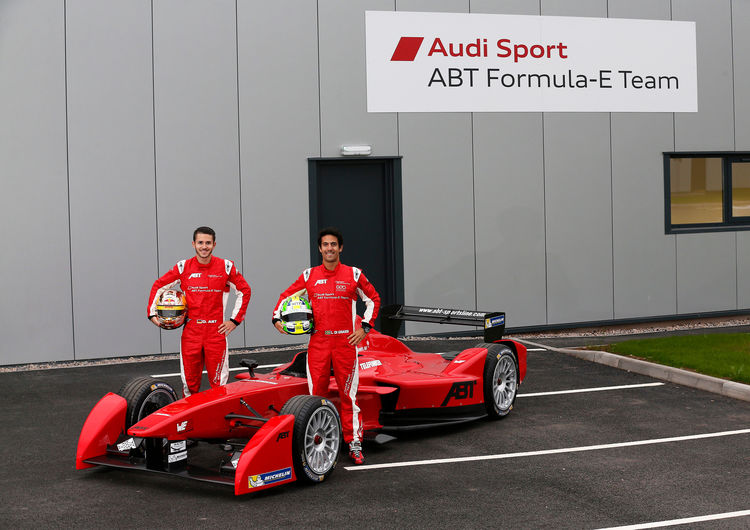 When 20 Formula E cars start in Beijing in September 2014, a vision becomes reality. Formula E is the first all-electric racing series to be held in the world’s major cities. And the idea immediately arouses the interest of many teams and drivers: A total of 10 teams field 35 drivers from 15 different nations over the course of the season. Since the battery capacity is not yet sufficient for a complete race distance, each driver has two racing cars at his disposal.

In the second season of Formula E, the teams have more freedom to develop their own powertrain. From now on, the individual teams can develop their own combinations of electric motor, transmission and power electronics. The chassis and the standard battery remain the same for all teams. The engine power is increased from 170 to 200 kW in practice and from 150 to 170 kW in racing.

Also in the second year of Formula E at the top: Lucas di Grassi and his team. The Brazilian is fighting close duels with the Swiss Sébastien Buemi throughout the season. Both drivers travel to the season finale in London with a chance of winning the title. In the end, Buemi wins the title by a narrow margin of two points. Audi Sport ABT Schaeffler also ends the season in second place in the team classification.

After the runner-up in the drivers’ and teams’ championships, the goal for the 2016/2017 season is clear: to finish the year one place higher in both championships. The schedule includes a total of twelve races in eight cities, including premieres in Hong Kong, Marrakesh, Montreal and New York City. Audi Sport ABT Schaeffler shines through the entire season with its consistency. With a few exceptions, di Grassi finishes each race at least in the top four, and Daniel Abt also regularly collects points. Lucas di Grassi’s chases to make up ground in the season opener in Hong Kong and victory in Mexico City remain unforgettable. At the season finale in Montreal the Brazilian arrives just ten points behind, which he turns into an 18-point advantage and thus the title win.

In the 2017/2018 season, Audi is the first German car manufacturer to compete in Formula E with a factory team. For Audi Sport ABT Schaeffler, the start to the fourth season is marked by bad luck and breakdowns. Daniel Abt’s first Formula E victory in Mexico City and Lucas di Grassi’s first podium of the season in the following race at Punta del Este mark the turning points of the season for the Audi squad. Podiums in Rome, Paris, Berlin and Zurich follow.

The home race in Berlin remains unforgettable. Audi Sport ABT Schaeffler celebrates a one-two victory with both drivers Daniel Abt and Lucas di Grassi. The pole position as well as the fastest race lap for Daniel Abt make the maximum points score perfect. After an impressive recovery, the team secures the team championship after twelve races around the globe with four victories and eleven podium places with a narrow points advantage of only two points.

With the second-generation car, Formula E 2018/2019 starts the new season with the biggest change to date: for the first time in the series’ still young history, only one car per driver is used due to the improved battery capacity. Audi Sport ABT Schaeffler starts the new season as defending champion, which once again provides plenty of variety and exciting racing – from the hottest race of the year with 37 degrees Celsius in Santiago de Chile to pouring rain and hail in Paris.

Two of the season’s highlights: the heartbeat finale at the Mexico City E-Prix, where Lucas di Grassi wafer-thinly clinched Pascal Wehrlein’s victory on the start-finish straight, and di Grassi’s victory at the home race in Berlin. After 13 races on five continents with nine different winners from eight teams, four drivers from three teams still have a chance to win the title before the season finale. With ten podium finishes, one pole position and eight additional points for the fastest race lap, the Audi e-tron FE05 is the most successful Formula E racing car of the season.

Due to the Covid 19 pandemic, the cars in Formula E are also standing still after five race weekends. The solution to be able to choose a champion after all: an adapted, compact racing calendar with six races in just nine days on three different track layouts in Berlin.

Audi Sport ABT Schaeffler meets the challenge with René Rast at the side of Lucas di Grassi. With three podium finishes, two of them in Berlin, Audi Sport ABT Schaeffler ends the season in sixth place. With 43 podiums, the team remains one of the most successful in Formula E history. In addition, Lucas di Grassi leads the drivers’ leader board with 32 podium places and 796 points.