Loïc Duval has celebrated many major successes in motorsport. They include winning the 24 Hours of Le Mans in 2013 plus the FIA World Endurance Championship (WEC) the same year. Even so, the Frenchman was faced with a new beginning in the 2017 DTM season.

Besides René Rast, Duval was the only newcomer in the field of 18 entrants in the 2017 DTM season. “In spite of my experience in motorsport, I was practically a rookie again,” says the Frenchman. “I knew that the DTM is not an easy series. Even so, my first season was tougher than expected. There were some highlights like my first DTM podium at Zandvoort, but on the whole it was a difficult season in which I learned a lot. “I think we’re going to see even more from Loïc,” says a confident Head of Audi Motorsport Dieter Gass who, following the brand’s departure from prototype racing at the end of 2016, asked Duval to join the Audi DTM squad.

The FIA World Endurance Championship (WEC) with Le Mans as its pinnacle event of the season was Loïc Duval’s professional home for five years. “2013 with victory at Le Mans and the WEC title win together with Allan McNish and Tom Kristensen was a brilliant season,” says the Frenchman. Only a year later, he made headlines with a serious accident at Le Mans – a story that has some things in common with that of his current DTM teammate Mike Rockenfeller. Just like “Rocky,” Duval returned to the cockpit after a brief recovery break. In 2016, in the two last Audi triumphs in the WEC, he was sitting in the victorious Audi R18.

“I’m very happy about forming a team in the DTM with Mike,” says Duval. “We’ve always gotten along really well. Mike is a good, open type of guy and knows what matters in the DTM. I benefit from his experience.”

The DTM scene, though, was not totally new to Duval. In 2004 and 2005, he contested the Formula 3 Euro Series as part of the supporting program. On that occasion, he watched the DTM races with suspense and also got to know most of the race tracks on which the DTM is held.

Following his Formula 3 days, Duval moved to Japan for nearly a decade where in parallel to single-seater racing he was active in the Super GT Championship which he won in 2010. “There I drove similar cars as in the DTM which is another reason why I immediately felt comfortable in the Audi RS 5 DTM in my first test.”

That the DTM and the Super GT are now cooperating and jointly working on a common future particularly pleases Duval. “Both are strong series, this cooperation can only be positive. The cars from Japan with demo laps in the DTM finale at Hockenheim caused quite a stir last year and we received an enthusiastic welcome at the Super-GT finale at Motegi as well.”

In parallel to the DTM, Duval is returning this year in the LMP 2 category to the FIA World Endurance Championship and the 24-hour race at Le Mans. The latter is his great passion – not surprisingly since he was born in Chartres, 130 kilometers northeast of Le Mans.

For a long time, the Frenchman lived in Tokyo in Japan. Now the Audi factory driver with his wife, Gaëlle, and their two sons, Hugo and Martin, lives in Nyon on Lake Geneva in Switzerland. Parked in the family’s garage is an Audi SQ7 TDI. “A perfect family car,” says an enthusiastic Duval who this year will also act as commentator for several Formula 1 races for the French TV channel Canal+.

In addition to motor racing, soccer is one of the Frenchman’s passions. Be it during official PR commitments, matches of celebrity teams or in personal surroundings – Duval is an avid soccer player and has been a supporter of Audi’s partner FC Bayern München since his childhood days. “I love tennis too. I’m generally a great fans of sports and watch many sporting events on television. In early 2017, I had the opportunity to watch the Hahnenkamm ski race as a spectator in Kitzbühel. That was a fantastic experience as well.”

Duval stays fit primarily by cycling and swimming. He rides hoverboards and trains with a personal fitness coach. For his second DTM season, he has selected a new number for his car: “28 is the number of the French ‘département’ where I was born. It has accompanied me my whole life.” 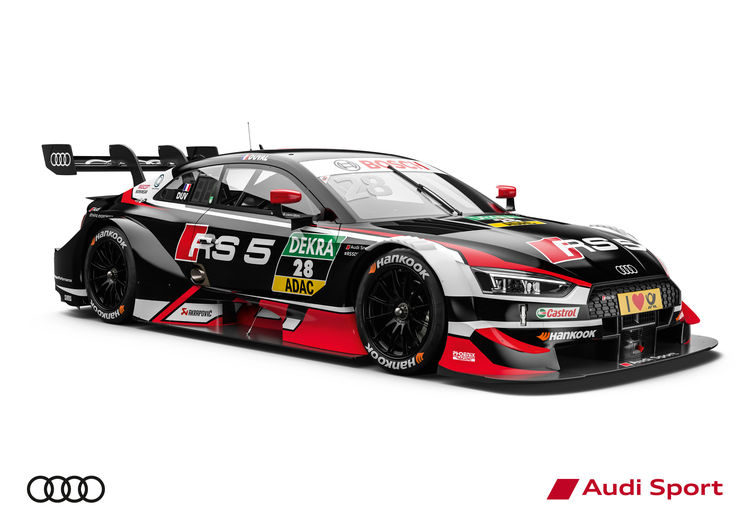