For three years Team EKS has been successfully battling for victories and titles in the World Rallycross Championship. Mattias Ekström built his victorious squad from scratch. How an idea was transformed into a winning team.

For a long time rallycross was “too dirty” for Mattias Ekström. His opinion changed while he was running as a guest entrant in the 2013 European Rallycross Championship. The Swede whose father, Bengt, was on the European Rallycross Championship grid in the 1980s and 1990s, finished runner-up in his home round at Höljes and was enthralled by the unique atmosphere in the Swedish woods. As soon as he was on his way home he made initial phone calls and forged out plans for putting his idea into action with friends and partners. Janne Ljungberg, now Technical Director at EKS, tipped the scales. “If Janne hadn’t said that we’d be making this project reality EKS would never have come into existence,” says Ekström who knows Ljungberg from their joint days in the DTM.

After less than a year of preparation, Ekström contests his first World RX round in the Audi S1 EKS RX quattro on June 14, 2014. Just three weeks later, in his home round at Höljes, he actually stands on the top step of the winners’ rostrum. 857 days following his debut, he crowns himself world champion early and only 38 days later, EKS becomes teams’ world champion as well. The squad has since grown to 25 members – including the three drivers, Ekström, Toomas Heikkinen and new signing Reinis Nitišs, plus mechanics, race engineers, a small media team and chef Jonas Landmark, who has even cooked for the Swedish King before. “I personally selected all the team members,” says team boss Ekström. “That’s very important to me. All of them are experts in their field as well as friends of mine. They think the way I do and know how to jointly achieve success: with passion, commitment and in a really good mood.”

Thanks to factory backing from AUDI AG in the 2017 season, EKS is now supported by employees of the Audi motorsport department as well. One of them is Andreas Roos. Previously, the Project Leader Rallycross at Audi Motorsport was Technical Director LMP Racing Commitments, among other things and, in addition to plenty of experience, brings a lot of personal passion to the project. 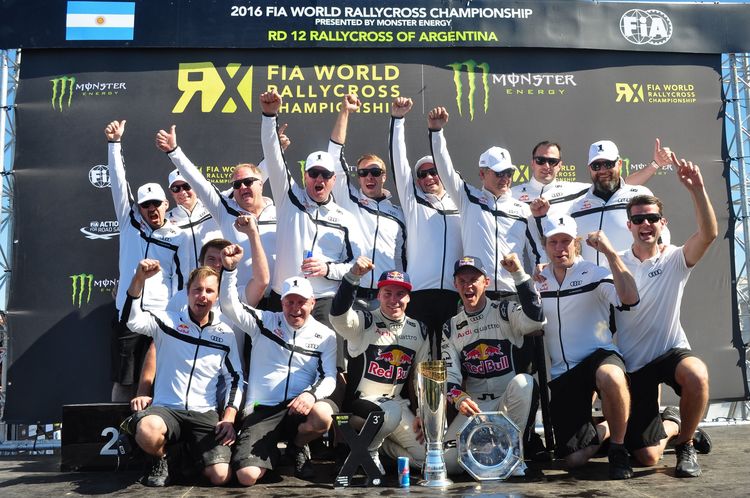