When he was young, René Rast dreamed of a DTM career. He had long let go of this dream when the opportunity unexpectedly presented itself last year and he impressively used it.

The first call that was to change his career came on a Saturday night. “We were celebrating my girlfriend’s 30th birthday when my cell phone rang around nine, nine-thirty,” the Audi driver recalls. “The caller asked if I felt like racing DTM.” Adrien Tambay had injured his hand during the start of race one at Zandvoort and Audi Sport Team Rosberg was looking for a stand-in for Sunday. “Of course, I immediately accepted. Fortunately, I still had my helmet in the trunk. We arrived at the hotel at around two or three o’clock in the morning.”

Rast had never driven the Audi RS 5 DTM before and left such a good impression on making his DTM debut without any preparation whatsoever that he was given another stand-in opportunity, for Mattias Ekström at the finale – this time with a little more time to prepare, including a test at Budapest. The result: a sixth place, initial points and a clear recommendation for a full DTM season.

“The DTM has always been a series I wanted to race in,” says Rast, who lives in Bregenz on Lake Constance with his partner, Diana, and son, Liam. In the early days of my career, I used to race in the DTM’s supporting program for many years, so the DTM was always a big aim of mine. But at some point in time, I focused on endurance racing, which made the DTM fade into the background somewhat. That it worked out now after all was not to be expected but makes it all the sweeter.”

René Rast continually delivered convincing performances in his career, which allowed him to move up the ladder step by step. His career path within the Volkswagen Group has taken him from the Polo Cup all the way to Le Mans and now into the DTM. He won the Porsche Supercup held as part of the Formula 1 supporting program an amazing three times. Since 2011, he has been active under the banner of the four rings. At the wheel of the Audi R8 LMS GT3 sports car, he is regarded as the benchmark and a driver that guarantees success. His victories in the 24-hour races at Daytona, Spa and at the Nürburgring underline this, as does a title win in the ADAC GT Masters. 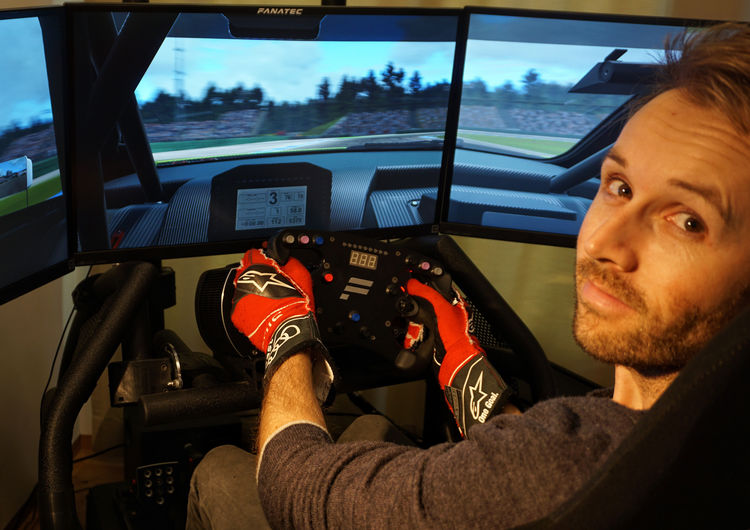 On making his Le Mans debut at the wheel of the Audi R18 e-tron quattro hybrid race car, Rast left a strong impression as well. And with top performances in the LMP2 category of the FIA World Endurance Championship (WEC), Rast made his mark too. He has even contested a race in Formula E.

Rast is regarded as a racing driver who is fast in any type of race car. His side job in the gaming industry may be of help as well. A Fanatec simulator on which the “Project Cars” simulation is run has been set up at his home. Rast serves as a “handling consultant” to the e-racing project and now benefits from his side job in the DTM as well. “The DTM car requires a driving style I haven’t experienced in any other car. Driving that way on the simulator every day means that I’m storing the experience in my mind, so I don’t have to start from scratch when I sit in the real RS 5 DTM.”

Rast is cautious about making any predictions for his first DTM season. “My goal is to become the best rookie even though, with Loïc (Duval) in the field, there are two of us. I’d like to learn to regularly score points and to always finish the race well, to simply learn my way around the DTM, to integrate myself and to extract the most. We’ll have to wait and see how far that’ll get me. The DTM is extremely changeable. Nobody can tell where he stands at the end of the year. There are simply 18 extremely good drivers competing in the DTM.”

The car number he picked is 33. The reason is somehow typical for Rast, who is regarded as a pragmatist who remains unflappable in any situation. “I think ‘33’ simply looks cool, plus it’s easy for me to remember a double number.”

He is happy about contesting his first season in Audi Sport Team Rosberg. “That’s a tremendous squad I immediately felt comfortable with on making my debut at Zandvoort. In Jamie (Green), I have one of the fastest drivers as my teammate from whom I can learn a few things.”

In René Rast’s personal life, there was a major change at the end of 2016 when his son, Liam, was born shortly before Christmas. That is why the 30-year-old who stays fit by running ordered an Audi SQ7. “With a child we need a little more room, so the SQ7 is ideal.” He seems to have adjusted to the role of a father similarly fast as to the Audi RS 5 DTM: “Having a child is mega. I extremely enjoy my time at home.”