Mattias Ekström is a racing driver, a father and family man, plus a successful businessman. His maxim “Go hard or go home” has long become his hallmark.

The Swede, above all, is authentic. On the race track, he is a high-powered racer, always running flat-out. On camera, he won’t sugarcoat his words. Ekström speaks his mind in interviews. Plus, the Audi driver is always quick with a quip.

Ekström has now been racing in the DTM at the highest level for 17 years. There has hardly been a season in which he was not among the candidates for the title. Twice (in 2004 and 2007) he became DTM Champion. With more than 20 victories under his belt, he is the most successful Audi campaigner of all time – and one who knows exactly how to develop a new car. That’s why Ekström, together with Jamie Green, handled the lion’s share of the testing work in the new Audi RS 5 DTM.

Ekström hopes to personally profit from it. “My main goal is the third DTM title,” says the Swede. “Last year, my big dream was to become Rallycross World Champion. It came true, so it would be great if it worked out with the DTM this year.”

The prerequisites are good. “There’s a lot that’s new in the 2017 DTM and most of it will help me,” Ekström believes. “My goal is to achieve better results in qualifying and in the races on Saturday. If that works out I might be able to clinch my third title.”

Ekström has a new vehicle engineer, the Spaniard Arnau Niubó. “That’s a challenge I’m pleased to accept,” he says. “I know Arnau really well from many joint development tests and look forward to working with him.”

There was no doubt in Ekström’s mind about tackling his 17th DTM season in Audi Sport Team Abt Sportsline. “ABT is my second family and Hans-Jürgen (Abt) is like a father for me,” says Ekström. “In the DTM, I can’t imagine racing for anyone other than the Abt squad.” 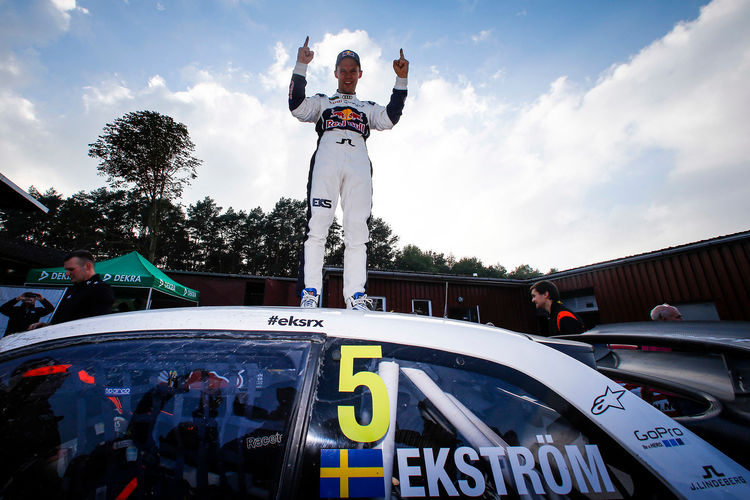 A lot of what he has learned at Audi Sport and ABT is reflected in his own rallycross team, EKS. As a businessman, he built the squad from scratch and went on to lead it to a double title win in the FIA World Rallycross Championship (World RX) within the space of three years. “This has been my greatest achievement in motorsport to date. I’m thankful to all the people that made it possible for me to make my dream come true.”

Starting this season, EKS will receive factory support from Audi. “We worked towards this for three years,” says Ekström who will continue to handle a dual driving commitment in the DTM and the World RX. At the beginning of July, there will be a conflict between the two important events at the Norisring and at Höljes. “We’ll come up with a solution for that as well,” says Ekström, unruffled. “My dual program only works to begin with because I’m getting tremendous support from everyone involved: from Audi, from ABT, from my own team and from my own family.”

Ekström lives in Austria, near the German border, with his partner, Heidi, and their two children. For his numerous trips to the Munich airport, his team in Kempten or Audi in Neuburg/Donau the versatile Ekström relies on the Audi Q7. “This year, I ordered an SQ7 – the Q7 is simply the best family car.”

DTM, rallycross and his family hardly leave any time for Ekström to pursue other hobbies. He stays fit with cross-country skiing, running and, preferably, playing tennis. In winter, he went skiing with his two children practically in his back yard. And, naturally, his stylishly furnished home in Ellmau includes a well-appointed gym.

Like most race drivers, Ekström is enthusiastic about other sports as well. For instance, he was particularly pleased when he had the opportunity to take part in an ice hockey practice session with ERC Ingolstadt at the beginning of the year and was given his own jersey bearing his name and his DTM car number 5: “I had the opportunity to practice with ERCI before, ten years ago, and subsequently clinched my second DTM title. Maybe it’ll bring me luck again ...”